This photographer chases the Midwest’s most dramatic storms. Here are some of his favorite shots. 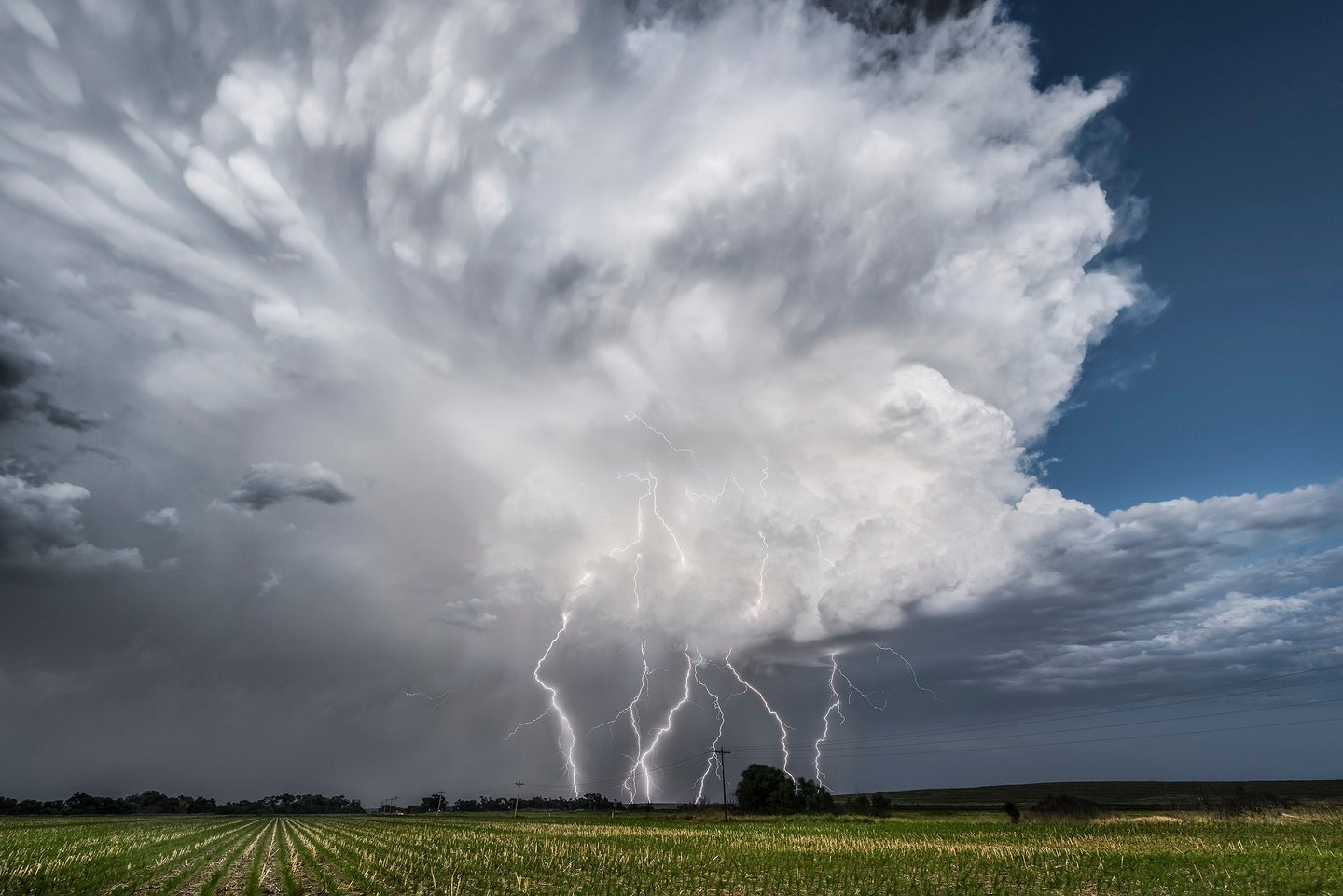 Eric Meola started chasing storms with his camera in 1977, almost by chance. He was traveling out West with Bruce Springsteen, photographing the classic rock artist for his album, “The Promise.” While shooting film of Springsteen driving on the dusty roads, the skies darkened and filled with cumulonimbus clouds, then rain, then lightning. Meola didn’t put his camera away.

Over the next four decades, the New York-based photographer would go back to the American plains year after year, tagging along with more expert storm chasers to document those fleeting moments when weather transforms into something “spiritual and zionistic.” “In this incredible chessboard of a landscape where everything is flat, peaceful, remote, beautiful, and pastoral—it goes from idyllic to Armageddon in so little time,” Meola says. “The sky turns pitch black, and it’s as if it’s the end of the world.”

On the road with other weather fanatics, he learned the language and cadence of meteorology and was astounded by the graphs, math, and data involved in pinpointing an emerging twister or thunderstorm. “Storm chasing is very much a science, but at the same time there’s a bit of black magic and intuition to it,” he explains.

Storm chasers are often part of community science initiatives, contributing photos and real-time logs to meteorological databases and the National Weather Service. Their efforts are especially valuable this time of the year, when the skies are especially threatening—the summer heat and humidity are crucial to cycling air and storm formation.

Capturing fleeting weather phenomena is harder than one might think, too. For one, it’s challenging to get a wide-enough field of view to capture an entire weather sequence through a camera lens, Meola says. Nature also doesn’t leave much time to plan compositions: When the light changes so dramatically and dynamically at an instant, a photographer has to be prepared to adapt.

“I like to go out there really to just see the beauty of a part of America that I think most people don’t get to see or appreciate,” Meola notes. Over the years, he’s grown really fond of supercells, which are gigantic, rotating drafts of warming air that can resemble flying saucers. “I think that’s what draws people out there,” he adds. “They always want to see another storm or tornado, they want to see another firework show.” But after many successful and failed storm chases, Meola’s learned that better doesn’t always mean bigger, brighter, and more colorful. There are lesser-known phenomena—like anticrepuscular rays and the updrafts from storm clouds—that are just as worth documenting in their own right, even if the element of danger isn’t always there.

Meola shared some of his favorite photographs of tornadoes, lightning, dust storms, and more from his 2019 book Fierce Beauty: Storms of the Great Plains with PopSci.