Leave Your Bones with Davy Jones

Eternal Reefs will mix your ashes with concrete and turn you into an artificial reef on the ocean floor. 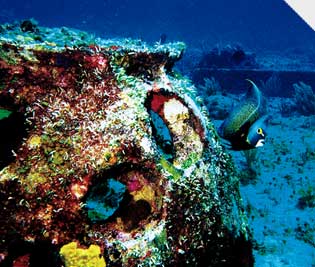 SLEEPING WITH THE FISHES
Now the dead can enjoy eternal rest in an artificial reef amidst colorful aquatic neighbors.

Cremation is all the rage in the funerary world, accounting for one-fourth of U.S. interments in the year 2000-a number expected to rise by another 15 percent in the next 10 years. Consequently, alternative cremation services are popping up everywhere. Houston-based Celestis will rocket your remains into space. Celebrate Life Inc. of San Diego will send you off in a lavish fireworks display. And, for somewhere between $1,500 and $3,200, Eternal Reefs, a Decatur, Georgia, company, will mix your ashes with concrete and turn you into an artificial reef on the ocean floor.

Don Brawley, Eternal Reefs’ founder, got the idea a few years ago when his father-in-law said he’d rather “be buried around a lot of life than in a field with a bunch of dead people.”

Brawley was already making artificial reefs to help restore fish habitats by providing a protected haven. The reef balls weigh between 400 and 4,000 pounds. A bronze plaque with the deceased’s name is affixed to the balls, and families get a certificate stating the reef’s coordinates. “We’re providing a service that helps people give back something positive to the environment,” says Brawley.

But some marine biologists are skeptical. John McManus, director of the University of Miami’s National Center for Caribbean Coral Reef Research, says: “If you’re trying to protect fish stocks, 70 percent of which are already overfished, the worst thing you can do is make it easier to catch the fish by plopping down an artificial reef.”