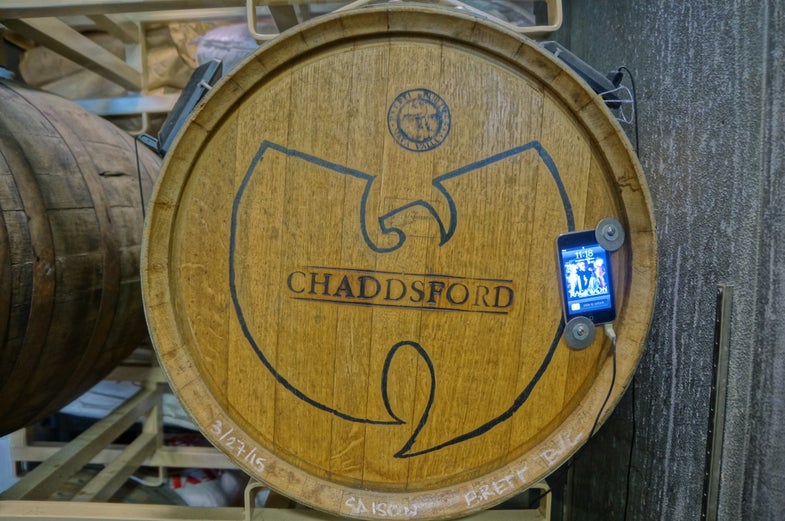 Philadelphia’s Dock Street Brewery likes to drink their beer with music, and on a whim they decided to combine the two for a bit of an experiment. The team will pump house favorite Wu-Tang Clan’s gigantic catalogue of rap music into the side of an aging Saison beer’s barrel for six months, before releasing it in September under the name “Ain’t Nothin to Funk With,” in reference to the musical group’s less PG 2000 single of a similar name.

Assuming the yeast (which will undergo a secondary fermentation during the aging process) like the music, everyone in the brewery should be happy during the process. But what happens after is not so simple to predict.

Saison tends to be the beer equivalent of sourdough bread. Dock Street Brewery team member Aleksandr Certo-Ware describes their house Saison (the same recipe as the Wu-Tang project) as “funky, kind of barn yard, with pineapple and citrus notes. And if you’re into sour it gives a really pleasant sourness.”

Getting the music to the beer was pretty simple, thanks in part to accessible technology that most of the brewers already use.

“We took an old iPod touch, downloaded Spotify, set the barrel up with its own Spotify premium account, and made the barrel its own playlist of like 500 Wu-Tang Clan songs,” says Certo-Ware. “It’s set to shuffle, and set on loop as well. It’s pretty much on a 24-hour-a-day, seven-day-a-week rotation.”

The speakers are nothing too impressive—something meant to give the beer an earful without rattling the rest of the operation. “They’re USB-powered computer speakers. It’s something you can hear from 40 feet away if it’s quiet. It’s got some volume to it. It’s been nice because we’re brewing all day, and sometimes we’re listening to other music, but there’s always Wu-Tang Clan playing in the background.”

Certo-Ware says they’re aging the beer for six months, and he’s not sure what’s going to happen during that time. “You can do anything possible and a beer can ferment perfectly, and then require more time next time.”

And as a brewer, Cero-Ware didn’t want to predict an outcome, adding “We’re not quite sure to be totally honest. Yeast is a living organism and it reacts to the environment around it. Certainly I think there’s sound science in vibration and the experiment here—I think it will absolutely have an effect on the organism.”

It’s difficult to establish a control on this experiment. Barrel aging the beer means that anything previously in the barrel can influence the final product. Certo-Ware says he and his Dock Street Brewing collaborators won’t be able to control for these variables, because they source barrels from different locations.

And barrels — which can be expensive on the resale market — are often hard to pair perfectly. Certo-Ware says, “Maybe down the road we’ll be in more of a position to have a control, take two brand new barrels, do one in one room, one in the other room, but for now we’re just doing this beer that we like, in a way that we can mix science and fun and our passions.”

This isn’t the first time in history that alcohol has been fermented to music. Author Sandor Katz, who wrote the 2012 tome “The Art of Fermentation,” says fermentation has been mixed with cultural events for centuries. He also notes that cultures have long thought that music played a part in the fermentation process itself: “The history of fermentation is actually full of stories of ritual, drumming, and music,” says Katz. “Many cultures created noisy rituals to awaken the yeast activity.”

Okay, so there’s precedent for letting the brews listen to some beats. But will it have any effect on the final product? The answer is probably not much.

Chris Powell, a lecturer in yeast and fermentation at the University of Nottingham, is skeptical that Wu-Tang will have any serious impact—at least on alcohol content. “There’s no evidence to suggest that this will have any effect on the final product. During cask/bottle conditioning the fermentable sugar should ferment out entirely,” Powell told Popular Science. “This will take place irrespective of vibrations or lack of them.”

In fact, although vibration may speed up certain processes, Dock Street’s timetable for aging its Wu-Tang-themed varietal over the course of six months negates some of the impact the sonic vibrations will have, and may even lead to undesirable effects.

“Arguably if yeast is in suspension longer under stressful conditions then this could give rise to increased autolysis (yeast death),” Powell adds. “This will have negative impacts on beer with potential for yeasty off-flavor production, and potentially result in reduced foam/head retention due to the release of protease.”

Powell also cautions again that this would depend on much louder music than a couple of computer speakers: “The music volume would need to be sufficient to cause quite serious vibrations in order to create mixing to the extent that this would happen.”

If the beer changes at all as a result of its exposure to Wu-Tang Clan music, Powell expects it will occur at the start of the process. “I would imagine that greater differences may be seen during the start of a primary fermentation or during yeast propagation where yeast division is taking place rapidly. Vibrations may cause daughter yeast cells to separate more quickly from mothers during reproduction leading to a greater total ‘yeast surface area’.” But while that mean the beer moves through certain steps faster, neither of these processes will necessarily affect the final product—or the taste.

Powell reminds Popular Science, (as does everyone referenced in this story) that this is speculation, because while there has been some research done with less subtle influences, what the Dock Street team will taste when they open the barrel in the fall is anybody’s guess.