Researchers say it's one of the best-preserved tusks of its kind. 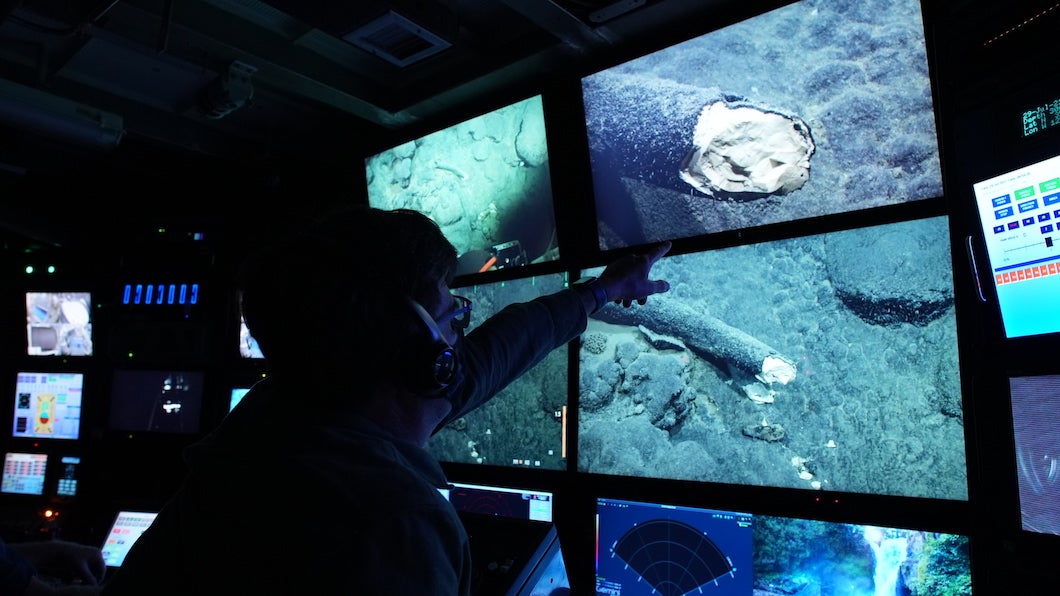 Aboard the R/V Western Flyer on a research expedition off the coast of California in 2019, scientists from the Monterey Bay Aquarium Research Institute were piloting remotely operated vehicles (ROVs) to search for new creatures in the deep sea when they found what looked like a tusk.

They were 185 miles off the coast, searching at depths 10,000 feet beneath sea level—finding a tusk seemed an impossibility. Randy Prickett, the senior ROV pilot who first spotted it, was sure that if they didn’t collect it they would later regret it. The crew was only able to retrieve a small fragment, but that shard confirmed that it was indeed a tusk. Preliminary research told them it was likely from a mammoth, but they couldn’t say for sure what species or time period the tusk was from.

Steven Haddock, the marine biologist who led the 2019 survey, became intent on untangling the mystery. In July, 2021, Haddock assembled another team to recover the rest of the tusk. They retrieved the entire 3-foot object. Back on shore, the team confirmed that it belonged to an extinct Columbian mammoth, Mammuthus columbi.

Radioisotope analysis also shows it is likely more than 100,000 years old, though the findings are not yet peer-reviewed.

“You start to ‘expect the unexpected’ when exploring the deep sea, but I’m still stunned that we came upon the ancient tusk of a mammoth,” said Haddock in a Monterey Bay Aquarium Research Institute statement.

“As it dawned on us that this was actually a mammoth, my head began to spin imagining how it came to rest atop this remote seamount,” Haddock told Gizmodo. “It is still hard for me to believe how it sat there for millennia without being destroyed or buried before we stumbled across it.”

Finding mammoth tusks more than 100,000 years old is extremely rare. Tusks are typically found deep underground or in the permafrost of the Arctic. The cold, high-pressure environment of the ocean floor is probably why this tusk was so well preserved.

“Our age estimate on the tusk is largely based on the natural radioactive decay of certain uranium and thorium isotopes imparted to the tusk from the ocean,” University of California, Santa Cruz geochronologist Terrence Blackburn said in a statement. “If the tusk had been found on land, deciphering its history would not be as straightforward.”

The next step is for paleontologists, geneticists, oceanographers, and geochronologists to analyze the tusk from all angles. They’ll extract and sequence DNA, perhaps revealing more about mammoth lineages and evolution from this time period. They’ll conduct CT scans to create 3-dimensional models and determine the tusk’s internal structure. And they’ll study the mineral crust surrounding the tusk to further understand where this mammoth came from and how it got to the bottom of the ocean.

The team thinks this tusk might be the oldest well-preserved mammoth tusk recovered from this region of North America, though further study will need to confirm their hunch. Evolutionary biologists know that Columbian mammoths were the product of two other types of mammoths that mated in North America, but they have yet to figure out exactly how or when this happened. This tusk “could really help clarify the timing of this hybridization event,” Pete Heintzman, an evolutionary biologist at the Arctic University Museum of Norway, told The New York Times.

More paleontological wonders may be resting at the bottom of the ocean. “It is still hard for me to believe how it sat there for millennia,” Haddock told Gizmodo, “without being destroyed or buried before we stumbled across it.”