The nuclear mutant is still evolving 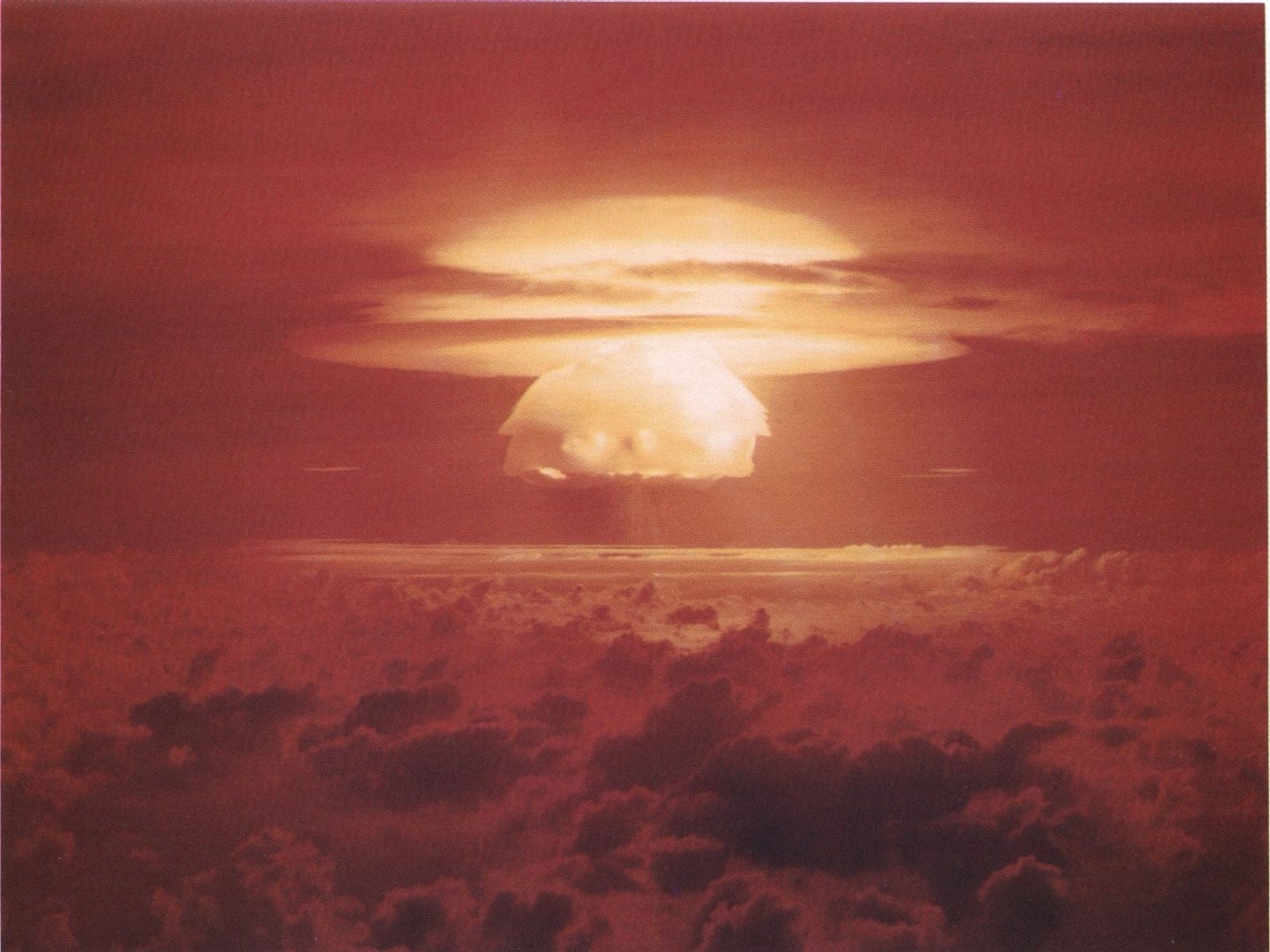 In the early morning of April 26, 1986, reactor number 4 in the Chernobyl Nuclear Power Plant exploded. In the middle of a safety test, energy levels plunged, so the operators withdrew the majority of the control rods to force the reactor back into production. It began to overheat. Hoping to neutralize the system, the scientists pushed the rods back in, but unbeknownst to them, they were tipped in graphite, an accelerant. Kaboom.

If you spent the summer watching HBO’s Chernobyl through your fingers, this is old news. The prestige drama sacrificed quite a few facts for narrative’s sake and should not be mistaken for anything approaching a documentary. But the creators carefully embroidered their five-episode miniseries with cultural and scientific detail: The sets, in the words of the New Yorker‘s Masha Gessen, are “reproduced with an accuracy that has never before been seen in Western television or film—or, for that matter, in Russian television or film.” A courtroom scene, in which three characters explain the minutiae of the disaster, graphite and all, dominates the finale. For five grueling episodes, the show maintains its commitment to realism, if not reality.

That makes it different from much of the atomic storytelling of the last three-quarters of a century, which stoked the public imagination with wild tales of nuclear mutants. But as we’ve learned, the real aftermath of radioactive devastation can be just as terrifying.

In August 1945, the United States dropped two nuclear bombs on Japan. But careful censorship meant Americans knew few of the details, especially about radiation and its effects. That meant public sentiment was complicated, and often contradictory. For many, “the atomic bomb was seen as sexy,” says Cyndy Hendershot, an English professor at Arkansas State University and Cold War pop culture expert. They grooved to rock ‘n roll songs like “Atomic Baby” and wore new swimsuits named for the Bikini Atoll, a major American nuclear weapons test site.

But the growing anxiety of a nuclear apocalypse needed an outlet, and Hollywood’s monster movies provided. “There were serious dramas that dealt with the actuality of nuclear war,” Hendershot says, “but people didn’t want to see that.” Instead, they turned to B-movies—low-budget, high-drama affairs—that took a sideways glance at catastrophe. These films, Susan Sontag argued in her landmark 1965 essay, “The Imagination of Disaster,” allow a viewer to “participate in the fantasy of living through one’s own death and more, the death of cities, the destruction of humanity itself.” You went into the theater scared, but you may have come out chuckling.

“The original mutants were ridiculous,” Hendershot says. In 1957, The Amazing Colossal Man and The Incredible Shrinking Man debuted within a few months of each other. Both are about average Joes exposed to nuclear radiation, with disastrous and diametrically opposed effects. Fifty feet tall and growing, the super-sized man terrorizes those around him. Psychologically ruined by his transformation, he destroys Las Vegas while wearing “a diaper-looking thing,” Hendershot says. He’s ultimately gunned down by the military. The shrinking man, by contrast, is at the mercy of every lifeform around him. He’s bloodied by his house cat and collapses after fighting a spider off with a safety pin. But he ends the film mentally intact: he will soon be reduced to atoms, but finds peace in the realization that all of creation is made up of some very small pieces.

In these and other American films, mutants were treated poorly, Hendershot says. They may have been victims of atomic testing, but to the wider world, they themselves were the menace. This ensured every movie had its “Disney ending,” as Bill Tsutsui, president of Hendrix College and a Japanologist, calls it. If there was only one dangerous individual (or, in Tsutsui’s favorite sub-genre, the “big bug movies,” one colony of oversized ants), the military could contain the threat and keep society safe. In contrast, Japanese cinema, made by and for people with firsthand experience of nuclear devastation, was more sympathetic of mutants. And it allowed both personal and political ethical dilemmas to go unresolved.

Director Ishirō Honda released the first Godzilla film in 1954. (In Japan, the monster is known as Gojira, a combination of the words for “gorilla” and “whale.”) The film, produced in the wake of that year’s Lucky Dragon No. 5 incident, in which an American hydrogen bomb test in the Bikini Atoll contaminated a Japanese fishing boat, tells the story of an ancient monster awakened by H-bomb testing in the Pacific. A respected zoologist spends much of the film defending Godzilla’s right to live, but ultimately helps to destroy the creature for the good of mankind. A scientist who creates a dastardly “Oxygen Destroyer”—the only weapon capable of defeating the monster—destroys his notes and drowns himself alongside Godzilla so that no one can ever recreate his work. Despite their sacrifice, at the end of the film the characters conclude that so long as weapons testing continues, “it’s possible that another Godzilla might appear somewhere in the world, again.” It’s both the perfect segue to a sequel (of which there are now 34) and an earnest call for nuclear non-proliferation.

In “The Imagination of Disaster,” Sontag wrote “[t]here is absolutely no social criticism, of even the most implicit kind, in science fiction films.” A decade later, that kind of context-free storytelling felt increasingly impossible, even in the U.S. In 1979, Three Mile Island generation station in Pennsylvania suffered a partial meltdown. Between 1965 and 1982, the number of Americans who supported the United States’ decision to drop nuclear bombs on Japan dropped 7 points, to 63 percent. That year, a million people gathered in New York City’s Central Park to decry atomic weapons, in what was then the largest protest in American history.

Social criticism was everywhere, including the silver screen. As the Cold War progressed, nuclear weapons and power plants moved from the realm of science fiction to the world of political thrillers, and from the B-movie to the Oscar-worthy. Two critical darlings, The China Syndrome, which premiered in 1979, and Silkwood, which came out in 1983, focused on everyday Americans determined to expose cover-ups at generating facilities.

HBO’s Chernobyl, in many ways, is a modern mutation of this narrative DNA. Subordinates push back against their bosses and fail. Colleagues lie, cheat, and fight for favors. It’s standard workplace docufiction—a radiation-poisoned The Office. When nuclear mutants do appear, their presence is understated, at least compared to a 50-foot-tall man in a giant diaper. At the end of the first episode, a dying bird falls to the pavement. The proverbial canary in the coal mine, it twitches violently as locals, unaware of the hazardous materials streaming out of the nearby power plant, innocently run errands around town. Later, the series depicts a crew of “liquidators” tasked with killing every creature they can find in the “zone of alienation,” an area of restricted access around the exploded reactor. Their goal? To prevent the wild, stray, and pet animals from spreading any radiation in their fur.

Today, the Chernobyl exclusion zone has expanded from an initial 19-mile radius circling the power plant to a 1,600 square mile blob straddling Belarus and the Ukraine. Despite the contamination, which will persist for thousands of years, all kinds of organisms, from birds to humans, still live and, crucially, eat inside the exclusion zone. The risks residents face are real. While wildlife is thriving in the absence of large human settlements, barn swallows sport albino-spotted feathers; wild boars, made radioactive by a diet of contaminated mushrooms, roam from Sweden to the Czech Republic; and scientists worry European gray wolves residing in the zone may spread their mutations to populations across the continent.

As for people, there appears to be an increased risk of certain illness among those in or around the zone. Drawing tight connections between radiation exposure and public health outcomes is next to impossible, and findings are often controversial, but studies have linked Chernobyl fallout (along with other factors like diet, alcohol, and age), to an increased risk of miscarriage among women in affected areas. Research has also tied contaminated milk in Belarus to an increased risk of thyroid cancer in children.

For the rare few who can afford to remove pollutants from local soil or haul in new dirt, it’s possible to safely grow food in contaminated areas, says Kate Brown, a science, technology, and society professor at MIT. Just look at Atomik Vodka: Earlier this month, a team of scientists announced they’d successfully distilled grain grown in the exclusion zone into a safe-to-drink spirit. But the technical intricacies of soil remediation aren’t what made the vodka a viral internet sensation. It’s our obsession with the exclusion zone—that most forbidden of places, ruined by humankind’s hubris and reborn in our absence.

Since the Ukraine opened the Chernobyl zone to tourism in 2010, thousands have taken state-sanctioned tours of abandoned towns, nature-reclaimed ruins, and even the power plant itself. Their experiences are documented across social media, including on Instagram. Claims the site is a destination for social media influencers are greatly exaggerated; the exclusion zone certainly hasn’t replaced the beaches of Bali. But that may change, as Ukranian President Volodymyr Zelensky, whose qualifications include having previously played a Ukranian president on television, is intent on fixing his country’s “brand.” That starts, he says, with making Chernobyl a different kind of hotspot.

Despite the abundance of permitted tour vans, illegal visits to the site persist. A community of “Stalkers,” inspired by a first-person shooter game, enter the zone over and over again. The majority appear to be young men, Brown says, drawn like Daniel Boone to the frontier, determined to test their mettle. They bring along Geiger counters—not to avoid radiation, but to find it. Some drink the water and eat apples hanging from the trees.

Stalkers take exclusion zone exploration to the extreme, but they may be motivated by the same thing as the above-board Instagrammers. Brown speculates many people are drawn to Chernobyl not just for its history, but because they feel it may represent the future: “As we worry about climate change, and the habitability of our Earth, I could see people having those fears,” she says. “And what we do when we have fears? We watch horror films”—or take terrifying trips—“and scare ourselves so our anxieties subside.”

Seventy-four years after the atomic age began, the nuclear mutant staggers on. They face fierce competition in the marketplace from films and television shows about more contemporary fears, like viral outbreaks and terrorism. And as fears of nuclear war subside and the realities of climate change make themselves known, the campy terror of the 1950s has long since been replaced by the quiet horror of dying animals and decaying landscapes. They’re no longer the result of random chance or blameless accidents, either, but of deeply human error. More than ever, they’re our monsters, and if we’re willing to listen, they have something they want to tell us.