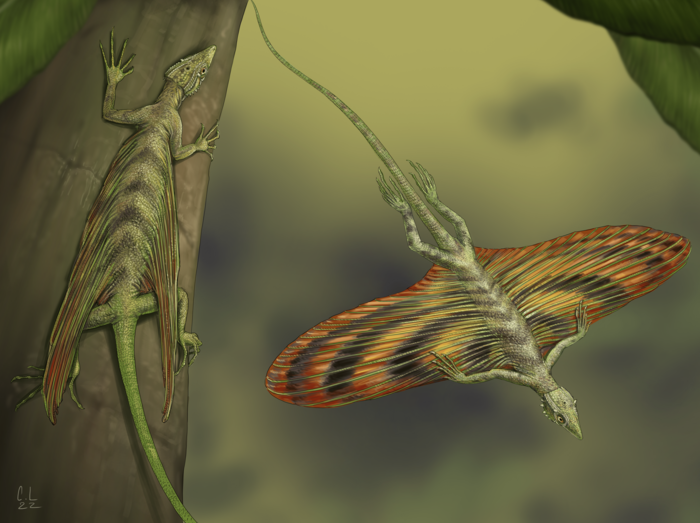 An artist's rendition of the "dragon like" reptile fro 252-260 million years ago. Illustration by Charlène Letenneur
SHARE

Late Permian Period reptile Coelurosauravus elivensis (C. elivensis) won’t be laying colorful scaly eggs or burning down armies anytime soon, but it does have the title of the planet’s first flying reptile.

In a new study published in Journal of Vertebrate Paleontology, researchers believe that the four-inch-long winged reptile evolved to glide between tree tops. C. elivensis was a tetrapod that lived during between 252 million to 260 million years ago in present-day Madagascar, and used a patagium (thin membranes extending from its torso to the front limbs) as a make shift pair of wings to travel above the tree canopy.

These unique features have earned the tiny lizard the title of “world’s first gliding reptile,” according to researchers from the French National Museum of Natural History in Paris and the Staatliches Museum für Naturkunde Karlsruhe in Karlsruhe, Germany. The first fossils of C. elivensis were unearthed in 1907 and sparked a spirited debate over how the reptile actually lived and how it evolved to have these wings. The team on this study created a near-perfect skeletal reconstruction of C. elivensis and the new research advanced knowledge of the tetrapod’s form and its habits. The team says that clues in the tree canopy of this extinct ecosystem have helped solve the puzzle.

[Related: Could dragons be real? Not in the way we think.]

A tree canopy of overlapping tree tops allowed the reptiles to move about without risking an altercation with predators on the ground.

“These dragons weren’t forged in mythological fire—they simply needed to get from place to place. As it turned out, gliding was the most efficient mode of transport and here, in this new study, we see how their morphology enabled this,” said lead author Valentin Buffa, from the Centre de Recherche en Paléontologie – Paris at the French Natural History Museum, in a press release.

The team looks at three known C. elivensis fossils and related specimens belonging to the Weigeltisauridae family of gliding Permian reptiles found present-day Germany. They focused on the postcranial portion (head skeleton), body, torso, limbs, and its “remarkable gliding apparatus,” called the patagium. The patagium is somewhat like a bat’s wing and is found in flying squirrels, sugar gliders, and colugos aka “flying lemurs.”

[Related: These flying squirrels fluoresce hot pink, and no one knows exactly why.]

Researchers were uncertain about the exact placement of the patagails (who together form the patagium) on C. elivensis‘ body and the study proposes that winglike structures were most likely located low on the trunk and extending from the dermal bones located between the sternum and pelvis or from the trunk’s musculature. This determination is based on the position of the bones, since none of the specimens contained any preserved soft tissues.

The team also compared this new location of these patagium to those of Draco. Draco (the Latin word for dragon) is a genus of modern-day gliding lizards often called “flying dragons.” These lizards predominantly live in Southeast Asia’s rainforests. The scientists reported that C. elivensis gliding apparatus was lower on its abdomen when compared to modern gliding lizards according to the statement and added that Draco’s patagials are supported by its long and flexible ribs.

“C. elivensis does bear a striking resemblance to the contemporary genus Draco,” Buffa said. “While its habits were likely similar to those of its modern counterpart, we do see subtle differences though. Like Draco lizards, Coelurosauravus was able to grasp its patagium with its front claws, stabilize it during flight, and even adjust it, allowing for greater maneuverability. An additional joint in one finger, though, may have enhanced this capability. This may have been a necessary compensation for the lower positioning of the patagium, which likely made it more unstable.”