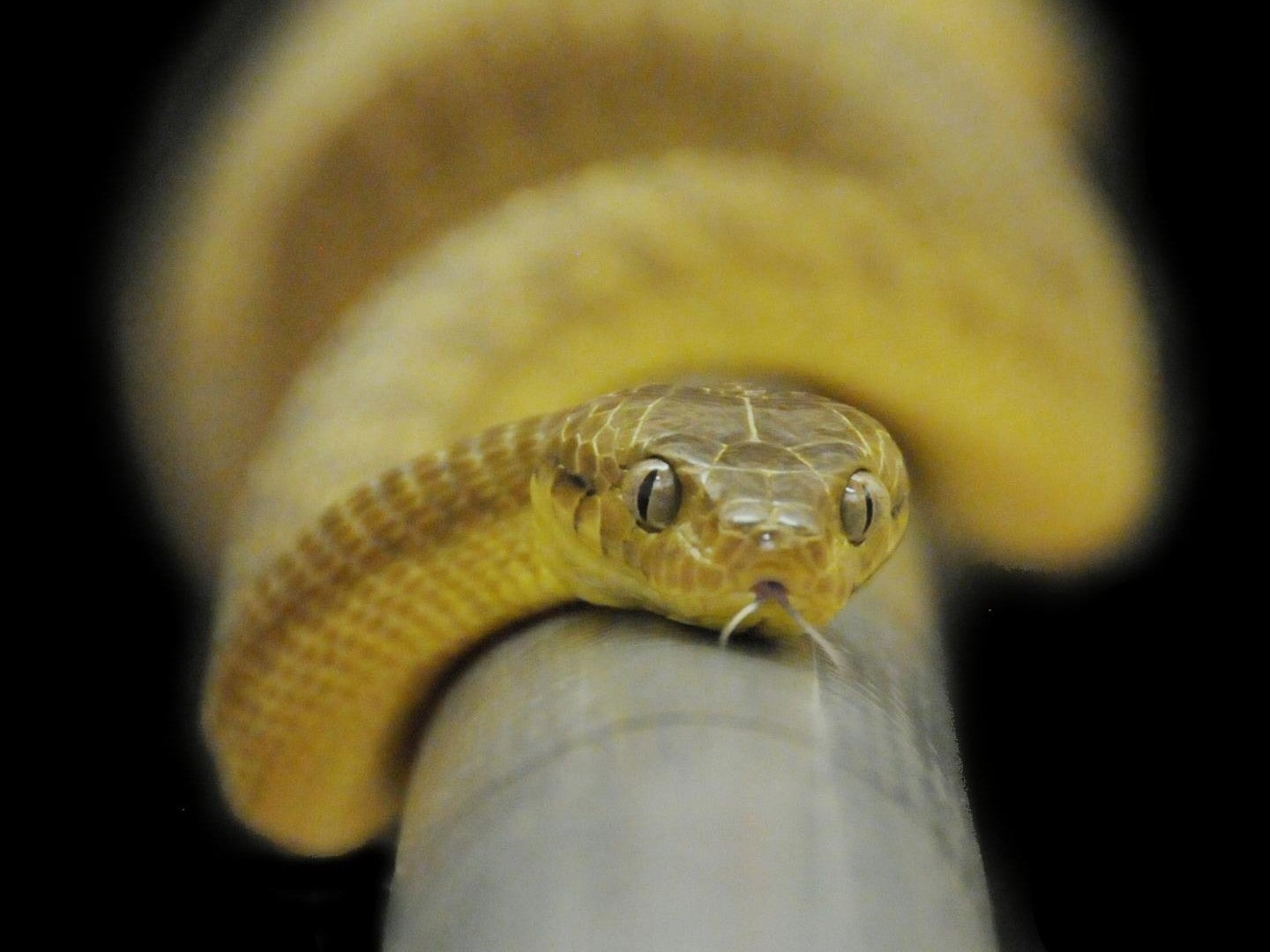 Biologists discovered a previously unknown form of movement that the brown tree snakes use to climb wide objects, like poles. Bruce Jayne
SHARE

When the brown tree snake is determined to climb something, it’s pretty hard to stop it. For decades, the invasive reptiles have slithered up trees to feast upon the forest birds of Guam. They did so with such ease that it intrigued biologists. Now, in a new study, researchers put the snakes’ skills to the test with large smooth poles, which are notoriously difficult to ascend. They turned out to be no match for the snakes. In the process, the scientists identified a previously unknown form of movement that the brown tree snakes used to shape their bodies into “lassoes” and pull themselves up the wide metal barriers.The researchers reported on January 11 in the journal Current Biology.

“Brown tree snakes are one of the most intensively studied snakes, and yet only recently were we fortunate enough to stumble on them performing this really unusual behavior,” says Bruce Jayne, a biologist at the University of Cincinnati and a coauthor of the new findings. “We certainly cannot rule out that some other species do it.”

Brown tree snakes—which are native to Australia, New Guinea, and other Pacific islands—were accidentally introduced to Guam sometime in the 1940s or early 1950s, likely in cargo ships, says Julie Savidge, an ecologist at Colorado State University in Fort Collins and another coauthor of the new findings. The snakes have since devastated the island’s forest bird populations. One of the few native birds remaining is the Micronesian starling, which plays a vital role in maintaining Guam’s forests by dispersing seeds from the fruits they eat.

Hoping to protect starlings nesting in human-made boxes, Savidge and her colleagues placed metal barriers 3 feet tall and 8 inches in diameter around the slimmer poles that supported the boxes. Birdwatchers in the United States and elsewhere have previously used similar barriers, or baffles, to keep snakes and raccoons away from the nest boxes in their yards.

To test the barriers, the scientists placed several snakes in arenas with nest boxes and filmed them overnight. When they reviewed the time-lapse images, the researchers saw that most of the snakes were stymied by the barriers. To their surprise, however, one snake “formed its body in a ring around the baffle and then started to wiggle up,” Savidge says.

The snake wasn’t truly making itself into a lasso, since there was nothing pulling on the end of its body, Jayne acknowledges. But it did look a lot like one. “There is this loop portion of the snake that surrounds the cylinder that is sort of tied-off by the snake’s body overlapping itself or in some cases even making a little knot,” he says.

When faced with smaller smooth branches or poles, snakes typically climb them using a form of movement called concertina locomotion. During this maneuver, the snake must grip the pole in two places, with one grip near the head and then another closer to the tip of the tail. “All types of concertina locomotion involve a combination of…bunching up and extending so you get this accordion-like change in head-to-tail distance,” Jayne says.

When the researchers filmed more brown tree snakes using lasso locomotion, they observed that the snakes gripped the pole with only one region of their body, which provided them with a unique advantage. “The snakes can climb a larger-diameter pole because they don’t run out of [body] length that they can use in the gripping region,” Jayne says.

He and his colleagues found that, within the lasso loop, the tree snakes form subtle sideways bends. The snakes then shift each of these bends to propel themselves upwards. All in all, the team observed 15 snakes using lasso locomotion, including one opportunistic wild snake that raided a nest box that the researchers had been observing outside of their test arena. It took the snake 15 minutes to climb up to the box, where it killed two large nestlings and one adult starling—all of which turned out to be too big for the invader to swallow.

The snakes are also known to climb power poles and cause electrical outages. It’s possible that the snakes are using lasso locomotion to scale some of these poles, Savidge says. One drawback to lasso locomotion is that it seems to demand a lot more energy than other kinds of motion; the snakes had to climb very slowly, while resting frequently and breathing heavily. Lasso locomotion may have given brown tree snakes an advantage in their native range, though, where some trees with unusually smooth trunks can be found. “They could be able to ascend the trees that didn’t have any crevices and little nubbins and so forth and get to prey,” Savidge says. On Guam, smooth-barked trees are very rare, so the snakes probably haven’t needed to resort to lasso locomotion much.

However, the snakes’ versatility does make them a formidable challenge for conservationists hoping to restore Guam’s forest bird populations. To thwart the reptiles, Savidge and her team are testing barriers shaped like ice cream cones that are narrow at the base and wider at the top.

For nearly 100 years, scientists have only known about four forms of serpentine locomotion. The discovery of lasso locomotion is not entirely surprising, though, says Gary Gerald, a biologist at Nebraska Wesleyan University in Lincoln who was not involved in the research.

“[Snakes] have no legs but the repertoire of behaviors they can do—especially aboveground in trees—is pretty remarkable,” he says. “Their limbless, elongated body shape is not a hindrance, it’s actually an adaptation…it allows them to move a lot of places that even limbed animals can’t move.”

The new findings are a demonstration of how skilled snakes can be at navigating difficult terrain, Gerald says. “This is just another thing that they are able to do that may be more difficult for limbed animals, giving the snakes, for lack of a better word, a leg up.”

The snakes have also inspired researchers in other areas of science. Many engineers are trying to emulate these varied abilities by building robots that can slither like snakes. “If one wanted to send a robot into an area where a building had collapsed, there would be all kinds of bricks and rubble and nooks and crannies and it would be really difficult for a robot to get through that,” Jayne says. “If you were to turn a snake loose in there, it could just scoot thorough that with great ease.” Studying lasso locomotion, he says, could perhaps improve future versions of these robots.