In Praise of the Bespoke Bicycle

These high-performance machines will run you as much as $15,000. Here's why a custom-built racer is a bargain 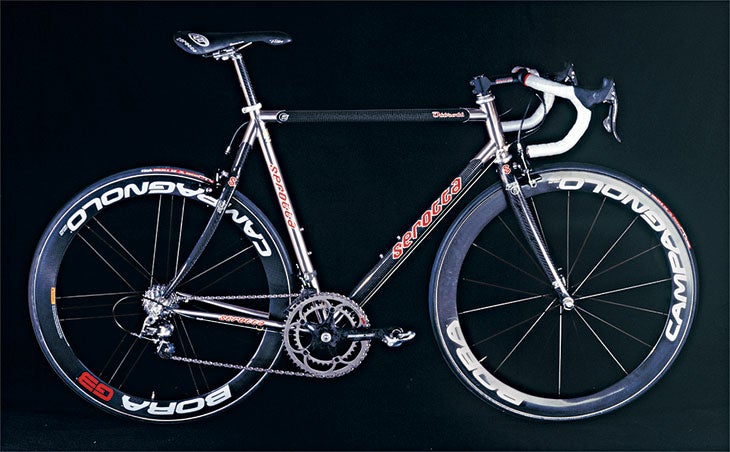 People still call them 10-speeds, yet the serious skinny-tire, drop-bar, hard-seat road bike hasn’t had a mere 10 speeds since John Kerry was in college. Now 20 gears are common and 30 an option, and few racers actually go racing.

Most Americans know more about Lance Armstrong than they do about ultralight, ultrafast bicycles, which happen to be among the most remarkable items of sporting equipment ever invented. To this day, the world hasn’t come up with a more efficient human-powered vehicle. The modern road bike is the product of enormous advances in materials, technology and aerodynamics, but the basic double-triangle configuration of the frame hasn’t changed in 120 years. Somebody got it right the first time.

What I particularly love about hardcore road bikes is that they provide every bit of techno-geekiness that a racecar does, at a hundredth the cost. Get into serious biking, and you can argue all day about carbon fiber versus titanium, and beryllium over magnesium, and then sit up all night counting sprocket teeth and computing gear ratios. You can leaf through catalogs of components as spendy per ounce as any Porsche part, obsess over aerodynamics as subtle as those of a 750hp four-wheel racer, and order paint jobs as compulsively detailed as anything on a Pebble Beach Concours winner.

But these bikes aren’t cheap. I told
a friend that we’d just bought our daughter a serious competition bike that cost $7,250. “Cool!” he said. “I love motorcycles. How big is the engine?” Oh, about five foot four, 115 pounds …

Brook’s new bike is a Serotta, its frame handmade by what many serious cyclists consider to be the premier American bicycle manufacturer. Serotta is a small company in Saratoga Springs, New York, that produces 2,500 frames a year. (The aforementioned Kerry owns three. Robin Williams has one; Shaq has a somewhat larger one.)

You can ride a basic Serotta frame made from the finest triple-butted
Italian steel tubing for about $3,000 if you furnish it with a comparatively inexpensive set of the components
that turn a frame into a functioning bicycle–wheels, derailleurs, chain rings, pedals, gear cassette, brakes and all the other stuff made pretty much exclusively by the Japanese Shimano and Italian Campagnolo companies.

Go for Serotta’s titanium-and-carbon-fiber Ottrott frame plus primo componentry, though, and you’ll be writing a check for at least 10 large. Spring for $4,000-a-set carbon-fiber wheels, a $500 seat post (basically a tube about the size of a hammer handle) and other two-wheel jewelry, and you can max out an Ottrott at $15,000–the price of a nice new four-seat, 123hp Toyota Matrix. For a bicycle? Insanity.

Or is it? It takes 30 man-hours to size, shape, cut, grind, trim, bond, and paint a top-of-the-line Serotta frame. It takes only 20 man-hours to build a
$47,000 Mercedes-Benz. The bike is practically a bargain.

The Serotta factory is an industrial building behind a former farmhouse. You can bike onto country roads right from the front door, and about half of Serotta’s employees do exactly that. (Quittin’ time used to be 2 p.m. so that everybody had time to ride, but business is too good for that today.) Two computer-controlled machines mill complex parts from blocks of steel and titanium. Once you’re in the shop itself, though, all that high-tech stuff is
forgotten. Classic 1950s lathes, drill presses, grinders, brazing and welding torches, jigs–and the craftspeople who operate them–do all the handwork.

Buying a Serotta is both more expensive and more complicated than buying a bespoke suit. Because the frame is tailored to the rider’s size as well as his or her shape, strength
and riding style–precise fitting is
considered by cyclists to be the most critical factor in performance–the
fitting requires a lot more than a
tape measure. My daughter spent several hours with dealer/fitter/racer Paul Levine, who works out of a “bike
studio” in his home in a McMansion cluster in woody Central Valley, New York. The walls of his retreat are hung with Serottas classic and new. There are displays of featherlight handlebars, trick seats, and stems made of unobtainium. The furniture is expensive and bikey, the centerpiece a low, plate-glass coffee table strewn with, yes, coffee-table bicycling books.

Levine sells more five-figure Ottrotts than any other Serotta dealer, but even that wouldn’t pay the mortgage on what has to be a million-dollar manor. “One of my goals was to make enough money to be able to spend the rest of my life wearing T-shirts and shorts, and biking,” says Levine, a
former retail-marketing consultant.
So loathed is he by bike-shop competitors throughout the Northeast that he sells “I Hate Paul Levine” cycling jerseys plastered with quotes from the competition (“I’ve done everything in my power to get him fired” and worse). “In sales, there are farmers and there are hunters,” Levine asserts. “Bike-shop owners are farmers. They stake out a piece of land and hope things will grow. I’m a hunter. I know the consumer I want, I market to them, and then I do one-on-one appointments.”

Levine grilled Brook, his latest quarry, about why she rides, which kind of
riding she likes best and what she wants to accomplish as a cyclist. He did a biomedical workup and flopped her onto a massage table to assess her flexibility. Then he put her on a Serotta invention, since copied by many custom-frame makers, called a Size Cycle.

With its wheelless front fork locked into a support and its rear wheel turning a generator with a wattage readout–a bicycle dynamometer–every angle, length, size and juncture of the mock frame was totally alterable. Levine had Brook pedal at her typical cruising speed while he made adjustments. “Look at that,” he observed at one point. “She’s putting out 10 more watts just as a result of lengthening the stem.” By the time he was done, he had two sheets of numbers and diagrams to send to Saratoga Springs, where eight lengths of tubing and a few small parts would be turned into an incredibly efficient extension of
its rider’s body.

“Some people think that by paying $10,000, they’re going to get the result they dream of, ride twice as fast with half the effort. But the machine is only one piece of the equation,” Levine says. “The bike has to match your body. It’s like getting a beautiful suit off the rack. It won’t be your suit. It won’t fit well, won’t wear well, and you’re not going to feel good in it.”