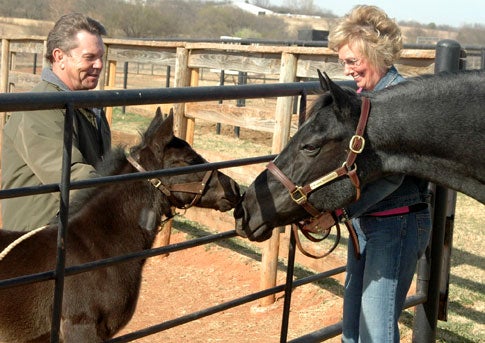 The horses you´ve cloned so far have been championship cutting horses. What is it about the sport of cutting (in which the horse separates-or “cuts” one calf from a herd of cattle) that makes the breeding so important?

One of the reasons we focused on cutting is because there´s no restrictions on whether the animal is purebred or registered. They participate in events based on their performance. You want a clone to have a chance to participate in all events and cutting is very flexible about that. It just so happened that our first clients were interested in cutting, but we also now have clients in other performance events like jumping and dressage.

The NCHA [National Cutting Horse Association] has said that cloned horses will be allowed to compete, but the American Jockey Club has nixed clones from thoroughbred racing. Do you expect the AHSA [American Horse Show Association] to follow suit for performance horses?

I don´t think the AHSA rules have changed yet for jumping or dressage, so that means it would be okay for a cloned horse to compete in these events right now. But more than performance, the emphasis is on breeding. It´s very hard to train stallions, so most dressage horses are gelded [castrated]. That means a great dressage horse that wins the Olympics is now useless for breeding. With cloning, you can make a copy of that gelding, keep him a stallion, and breed him so you pass along the champion gelding´s superior genes. It makes perfect sense for outstanding geldings to be cloned and used in breeding programs.

How different are cloned horses from their natural-born â€siblingsâ€? If I cloned the horse I rode as a kid, would the new horse feel exactly the same to ride?

If you had a horse when you were little and you raised its clone in the same geographical area and gave it similar training and similar living conditions, the genetics would be there to make it perform in the same way as your old horse. And you know its potential so you could then fine-tune the training and environment to make it express this potential even better. But we tell our clients we can´t guarantee performance. What if a foal gets sick or hurt when it´s young? That could affect future performance. But if you´re going to use these animals for breeding, they´re absolutely identical to the donor, so as far as their offspring, they´ll pass exactly the same genes to the progeny.

How does the cost of cloning a horse compare to a stud fee for a top-notch stallion?

The cost for cloning a horse is $150,000, and stud fees vary widely, but they can be nearly that high for a champion horse.

How do you see cloning affecting animal competition in the coming years? Will cloning raise the bar so that naturally bred animals no longer have a chance of winning?

Well, I think the number of horses produced through cloning will be relatively small, and they´ll have the same potential as their donor animals. It’s worth noting that for competition, there are advantages to natural breeding that you can´t get from cloning. With cloning, you´re producing a copy of a horse you already know, so you take away some of the gamble. But breeding gives you the opportunity to produce even better horses. You could lose the gamble, or you could selectively breed an animal with traits far better than the last generation. My vision has less to do with performance than breeding. You can compete on these animals, sure, but more importantly, you can extend the life of an outstanding breeding line. Some mares are not outstanding as competitors, but are outstanding in terms of the progeny they produce.

When you say extend their breeding life, you mean, like, take a 27-year-old mare that´s out of commission and make a new copy of her so her genes can continue on?

Yes, exactly. Or make several copies of a mare so that she can produce more than one foal per year.

But when you take an aged mare´s somatic cells and go to make a copy, aren´t you then dealing with slightly damaged cells? I mean, the cells of the body are degraded over time.

Yes, that´s true that the cells are degraded over time, but an interesting thing happens when you make a clone. There´s a sequence on the end of the chromosomes called the telomere, and telomere length gets shorter each cell division. Older animals have very short telomeres. But during early embryo development in a clone, an enzyme called telomerase resets the length of telomeres. If you put somatic cells from a young animal next to cells from an old animal, you can tell the telomere is shorter in the old animal. But the cloned embryos created from young and old animals begin to look the same during early development. So there´s no reason to believe that using an older animal should affect the outcome, which is healthy progeny with normal life spans.

While we´re talking about somatic cells, can you explain something to me? If, in an adult animal, somatic cells are already differentiated, how can you use them for cloning? How is it possible to make them generalized enough to mimic reproductive cells?

You can´t reverse differentiated cells, but once you’ve put a cell’s genetic material into an egg, the egg has the ability to remove somatic factors. During the cloning process, the egg strips the DNA information about differentiation and reprograms the status of the DNA to make it general again.

Do scientists understand how this happens, or is it still a big mystery?

I don´t think it´s understood completely how it happens, but we know what is taking place. We know that the somatic cell goes through a process in which the DNA becomes very compact and tight. Then the old factors are stripped and new factors are added. It´s a remodeling process. There´s also a process called activation that mimics a biochemical event that takes place during fertilization. We make the egg believe that fertilization has taken place with an electrical pulse. This stimulates the remodeled DNA in the egg to continue development. And then it grows like a standard embryo. We keep it in an incubator for a couple of days and then introduce it into a surrogate mother.

Do you have a personal interest in horses? Are you an equestrian?

No, no. I´m an embryologist-I´m only familiar with the reproductive side of things. I love to watch horse performance events but I don´t ride horses.