For that Healthy Glow, Drink Radiation!

In the early 1900s, radioactive water was all the rage. Hard to believe smart people could fall for such twaddle--right?

A century ago radioactivity was new, exciting and good for you–at least if you believed the people selling radium pendants for rheumatism, all-natural radon water for vigor, uranium blankets for arthritis and
thorium-laced medicine for digestion (you don’t even want to know about the radioactive suppositories).

Crazy, huh? Until I ran into the fascinating book Living with Radiation, the First Hundred Years, self-published by Paul Frame and William Kolb, I had no idea that radiation was the basis for a huge quack-medicine industry that lasted for decades and took in millions.

Today we know that exposing yourself to radiation is a bad idea. Even when radiation is used to treat cancer, its deadliness is what does the work, killing cancer cells at a slightly higher rate than normal cells.

But imagine yourself 100 years ago, before many of the first researchers studying radioactivity had died of cancer or other radiation-induced causes. Electricity had been discovered relatively recently, and it turned out to be perfectly safe in moderation, so why not radiation?

In fact, early discoveries made plenty of reasonable people think that radiation could be good for you. Natural hot springs have been used as health spas for thousands of years; even today, vacationers flock to their healing (well, maybe) waters. When scientists went around with radiation detectors, they discovered that the waters from quite a few well-known hot springs were radioactive. (Radon gas produced by the decay of thorium and uranium deep in the earth permeates the water at many natural hot springs.)

Since no one really knew what made them healthful, the springs’ radioactivity was as good a guess as any. Entrepreneurs started bottling the water and selling it as “Radon Water.” But rivals soon pointed out a problem: Radon’s half-life is just 3.82 days. By the time the bottle reached the customer, most of the radiation would be gone.

You might go so far as to say that Radon Water was a rip-off, which is exactly the pitch the Radium Ore Revigator company used to sell its “better,” “more scientific” product: a watercooler lined with a serious amount of carnotite, an ore of uranium and radium that undergoes radioactive decay, yielding radon gas. Storing any water in this cooler overnight would give you fresh, potent, invigorating radon water to drink by morning. Unfortunately for those who used them, Revigators actually worked. (Today, of course, we run as fast as we can from radon; ridding basements of it is a big business.)

Many of the radioactive products marketed at the time, such as uranium blankets, contained radioactive materials, but at such low levels that they probably did little harm to consumers. But over time, companies started producing ever more powerful devices, most of them based on radium, the element with the strongest marketing appeal. The supremely scary Radiendocrinator was a 2-inch by 3-inch case that contained paper infused with 250 microcuries of radium, enough to illuminate a fluorescent screen placed near it. It was meant to be placed over–the very thought makes me shudder–the endocrine glands.

As the industry developed, it gave birth to the inevitable wave of fraudulent products–fraudulent in the sense that they did not emit the high levels of radiation they claimed to. This led to a couple of the more surreal aspects of the whole episode: advertisements that positively guaranteed that a company’s products exposed you to the full dose of radiation promised, and instances of the government shutting down companies selling perfectly safe phony products instead of the real (deadly) items they claimed to be offering.

For example, the Bailey Radium Laboratories of East Orange, New Jersey, offered $1,000 to anyone who could prove that its “Certified Radioactive Water,” sold under the brand name Radithor, did not contain the large amount of radium and thorium it claimed to. Alas, Radithor was the real thing: No one ever claimed the prize. But Radithor did claim at least one life, that of the well-known industrialist, playboy and three-bottle-a-day Radithor user Eben Byers. Byers’s gruesome death in 1932 inspired the Wall Street Journal headline “The Radium Water Worked Fine until His Jaw Came Off.”

Byers’s death also prompted the newly formed FDA to crack down on radioactive health products, insisting on proof of their safety and effectiveness. Since they were neither, this had the effect of putting manufacturers out of business. Although low-radioactivity devices continued to slip through
regulatory cracks until well into the 1960s, the era of dangerously radioactive quack cures essentially went to the grave with Eben Byers.

The radium mania was a crazy little episode in the world of medicine, but it was not at all out of the ordinary. Pain and suffering have always helped foster an uncritical market for remedies and preventatives. Quacks and profiteers are quick to pick up on the latest discoveries and promote them to the desperate-for-a-cure market, regardless of how remote the connection between the discovery and any likely health benefits might be. Irradiating yourself in the hope of feeling better was no nuttier than, say, drinking a few teaspoons of plain water as medicine, which is called homeopathy and is extremely popular today.

These fads, old and new, tend to make remarkably similar claims, using the same arguments and marketing methods. Take a look, for instance, at the following passage, from a 1928 Radium-ore Revigator brochure, and see if it has a familiar ring:

In short, (1) what we’re selling is “natural,” unlike those potent medicines your doctor prescribes; (2) maybe you are not getting enough of this natural substance; and (3) the government hasn’t stopped us (yet). Remember, they’re talking about radon gas.

You could find a paragraph almost identical to this one in any health food store today. Here’s an example taken from the Web site of a more contemporary product designed to help your, um, vigor:

Because Nymphomax is an all natural nutritional supplement containing only the finest botanicals, there are no harmful side effects when taken as directed. Nymphomax is not a pharmaceutical drug and contains none of the synthetic chemicals found in prescription medications. It is a safe alternative to prescription drugs, which can sometimes have serious side effects.

Now, I’m not saying herbal medicines are as harmful as radiation, simply that promoting them as “all natural” tells you absolutely nothing about whether they are safe, effective, both or neither. What matters is what’s in the pill, not how it got there. There may be all kinds of herbal medicines that are safe and effective–just don’t expect the industry, or the government, to tell you which ones.

Amazingly, current federal law (the Dietary Supplement Health and Education Act of 1994) specifically orders the FDA to keeps its hands off virtually all herbal medicines, preventing it from regulating the claims, ingredients or safety of these preparations and forbidding it to require the tracking of side effects and deaths caused by them.
And although the FDA banned ephedra after several high-profile deaths, it
will probably take many more such tragedies before the law is changed to allow the agency to clamp down on other dangerous products.

Radon Water was harmless because it contained nothing, the radiation having vanished before it reached customers. Amusingly, this has an exact analogue in modern homeopathic remedies. Homeopathy “works” by dilution: Preparations of powerful substances are diluted, then diluted again and again and again until there is almost no chance that even a single molecule of the original substance remains in the final “medicine.” These nostrums are sold to the public at
top dollar, labeled with their original starting-point ingredients just as if they still contained any of them.

So don’t for a minute think that we’re all smarter and more modern than those idiots eating radium 100 years ago: Homeopathy is a huge industry today, and it is every bit as nutty. Once people suspend their critical thinking skills and go for hope over reality, the sky’s the limit in silly and dangerous medicine. 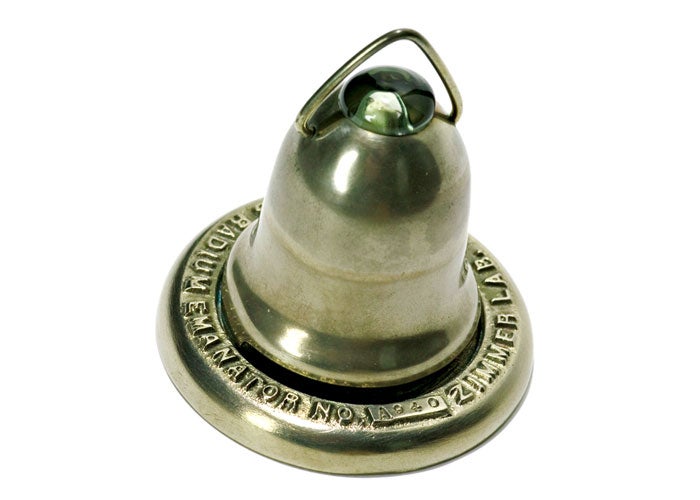 From William Kolb’s extensive collection of strangelly compelling radioactive nostrums: the Zimmer Laboratory Radium Emanator, which was designed to be immersed in a quart of water. 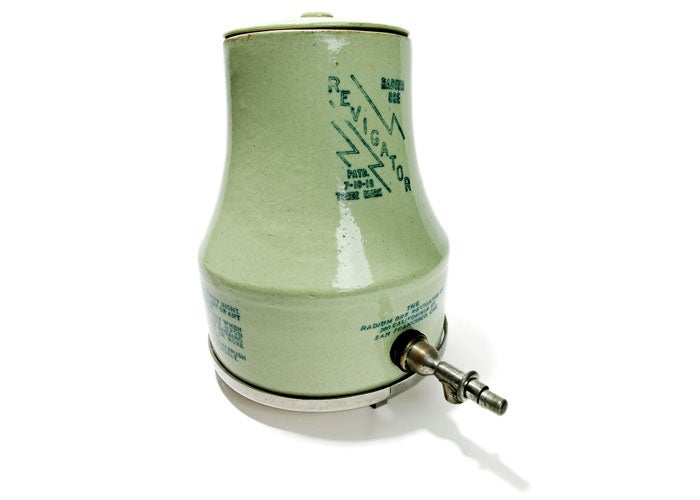 From William Kolb’s extensive collection of strangelly compelling radioactive nostrums: the Revigator watercooler, which, unfortunately, worked only too well. 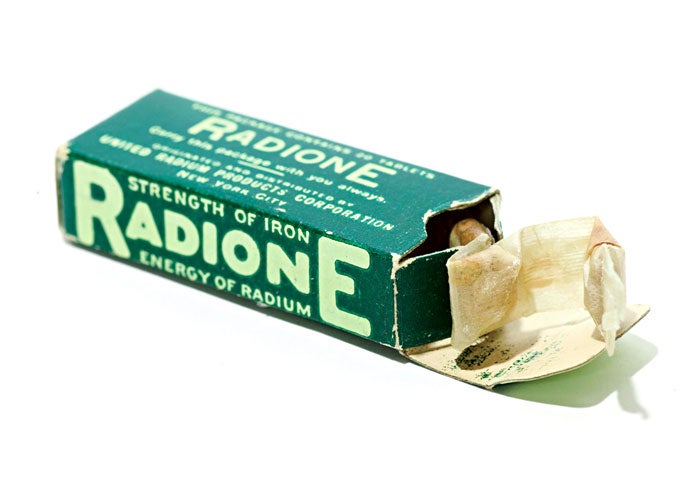