Scuba-trained investigators are learning protocols for examining watery graves. Rule #1 is not so high-tech: Watch out for 'gators.

Just a couple miles off the coast of Panama City, Florida, I descend by scuba to an artificial reef about 60 feet below the surface. The reef is teeming with fish and other marine life. It’s a beautiful sight–save for the dead body.

I am surrounded by a pod of divers, some with full face masks that include built-in communication systems. They are taking video, photographs and measurements, just as you would expect at a crime scene on dry land. The body is that of a man clad in a blue wetsuit and tied to one of the reef’s metal beams. His scuba regulator has been cut away, four of his fingers are missing, and his deeply gouged legs bob slightly, as lifeless as, well, as the day he came off the mannequin assembly line.

The crime scene is a setup, but the investigators around me are the real thing. They are divers from police and fire departments in places such as Florida and California whose line of work can put them face to face with waterlogged corpses (though more likely in a dark canal than in clear Gulf water). They’re here at the Panama City campus of Florida State University to take part in the first comprehensive training program for underwater crime-scene investigations. This two-week intensive seminar is teaching them the latest aquatic technologies, along with newly developed protocols that apply to everything from a scuttled boat to a body to a downed plane. The aim is to procure data that will stand up in court in cases of murder, insurance fraud, even international terrorism. In fact, the program was inspired in part by the unnerving post-9/11 realization that if debris from the World Trade Center had fallen into the Hudson River, or if United Airlines Flight 93 had landed in a lake, U.S. agencies might not have been prepared to handle an underwater terrorism crime scene. The program’s initial funding came in 2002 from the Defense Department.

The divers around me at the artificial reef are facing the course’s final challenge. Using the procedures taught thus far, they must document a scenario that is loosely based on a crime that really happened in these parts in 1975. Then they will present their evidence in a mock court complete with skeptical lawyers.

A few miles from the reef and the mannequin is a group of sunken lifeboats that are at the heart of the story. Students are told that the boats were used to deliver drugs, until a partnership went bad over internal dirty dealing and somebody ended up on top of a lit stick of dynamite. The explosion sent the boats to the bottom of Panama City’s harbor; some body parts were found by police but never identified. At another site, near shore, the group must find a gun that was reportedly involved in the crime. Their job is not to prove the entire case but to find evidence that corroborates the taped testimony of a snitch, who told authorities about the unsolved murder nearly 30 years after the fact in exchange for a reduced sentence for a recent crime. This is critical, because after tattling, the snitch was killed. It turns out he’s the body at the artificial reef and so won’t make much of a witness. The students also have to collect the evidence needed to prosecute his murder.

The premise of the Florida State class is that underwater crime scenes must be handled with the same attention to detail that their dry-land counterparts receive. On land, it’s standard to cordon off the area and make sure nothing is moved until measurements and photos have been taken and evidence–in the form of fingerprints, DNA or other samples–has been preserved. Underwater crime scenes, in contrast, have often been run like salvage operations (recall the 1996 television images of law enforcement officers and volunteers traipsing through South Florida swamps, gathering pieces of a downed ValuJet plane and throwing them in piles). The high-tech methods being taught now are modeled after the meticulous practices of underwater archaeology, which demands that the precise location of every scrap and artifact on a wreck site be mapped and that everything recovered be carefully preserved. “For years, evidence found underwater was generally ignored or mishandled so that it couldn’t be used,” says Michael Zinszer, a former Navy diver who helped to establish the Florida State program. “What we’re saying is that it’s all usable and presentable in court if handled properly.”

Today’s students are divided into three groups. The one I’ve joined boards a pontoon boat, where we find a laptop computer displaying a sketchy red-and-black map of the infamous sunken lifeboats. Another student group created the map earlier in the day by dragging a torpedo-shaped sidescan-sonar instrument back and forth behind the boat. Such systems, which measure the way sound bounces off the seafloor to create an image of its contours, are compact enough now that they can be used just about anywhere there is water–they can even be dragged by hand down a canal. In the future, crime scene divers may be able to get sonar data on head-up displays, which would be especially valuable in dark underwater environments.

Our group moves in for a closer look with a remotely operated vehicle (ROV) known as a VideoRay. The size of a toaster, it is equipped with a video camera and is tethered to a control station and monitor on the pontoon boat. Once in the water, its jerky movements make it seem like a yippy dog eager to please its master. An instructor drives, or “flies,” the vehicle away from our boat and down to the site. Within seconds we have a clear view of the bow of one of the lifeboats. ROVs are the tool of choice for initial underwater investigations because they limit human exposure to the dangers of scuba diving, polluted water, alligators and other hazards. They also save time: If you have to distinguish a dead body from a bunch of junk in a pond, it’s a lot easier to drop in an ROV to investigate each potential target than to send in specially trained divers. At this particular site, the VideoRay confirms that the damaged lifeboats look decrepit enough to have been down there since 1975.

Putting people in the water is still usually required for such tasks as retrieving evidence and taking measurements. Descending with my group, I first make out the same bow I saw through the ROV’s eyes. But soon I am able to take in the wider scene. The boats’ orientation matches the snitch’s story: They look like they could have once been tied together, and little remains of the one that took the blast. As at the reef site, the divers take video, photos and careful measurements.

The last scene we visit is knee-deep water near shore. This is where a gun was reportedly thrown after being fired at the apparently not-too-personable fellow who also took the dynamite blow. The group finds the weapon using a waterproof metal detector, but not before calling the Environmental Protection Agency to confirm that the water is clean enough that protective suits aren’t necessary. Students are urged to make such precautions routine–in the drainage ditches and ponds where much investigative work is done, toxins and sewage are a serious concern.

Currents underwater can have the same effect that wind does on a terrestrial crime scene, so you won’t normally find divers combing for hairs or pollen grains like the folks on CSI. Still,
evidence such as the handgun the group found can be collected in sealed containers and analyzed for fingerprints, which can be lifted for weeks or more after an object has been dropped (especially if there’s little current to scour it clean). Items inside the glove compartment of a submerged automobile could retain fingerprints much longer. Students at the Florida State program learn to keep recovered items in water until they’ve been tested; a gun will quickly rust once it’s exposed to air, obscuring the markings that can be used to tell whether a particular bullet was fired from it.

After two days working in the water, students spend a night analyzing their data for presentation in mock court. They review videos and compile measurements, plotting them on maps, and compare all the evidence against the witness’s testimony. “They put together a great presentation,” Zinszer says afterward. “They laid their evidence out in a systematic, methodical way just like they should.” And then “the attorneys ate them up and spit them out”–exactly as planned. Learning to stand up to tough questioning is a key part of the process, Zinszer explains. The dive teams had not combed the reef site thoroughly enough and had missed a key piece of evidence: a regulator that had become detached from the victim. And because they started with a report of exactly where to find the body, they had neglected to make a sonar map of the reef, which they could have used to back up physical measurements of the body’s location. Next time, in the real world, the diver-investigators will be more prepared, Zinszer says: “They just need to get beat up in court a few times to learn how to put everything together.” 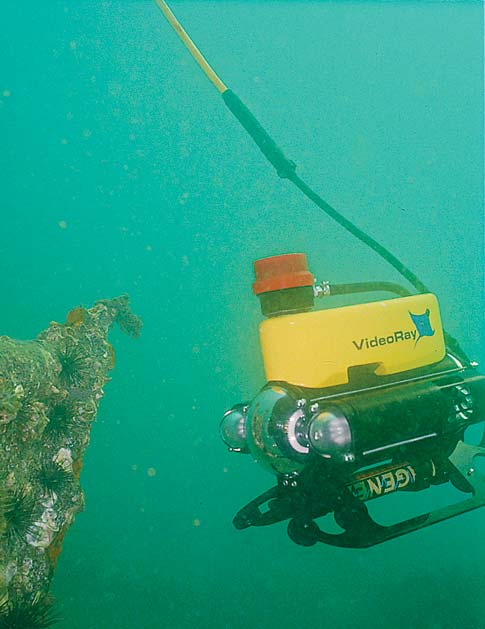 The ROV in action. 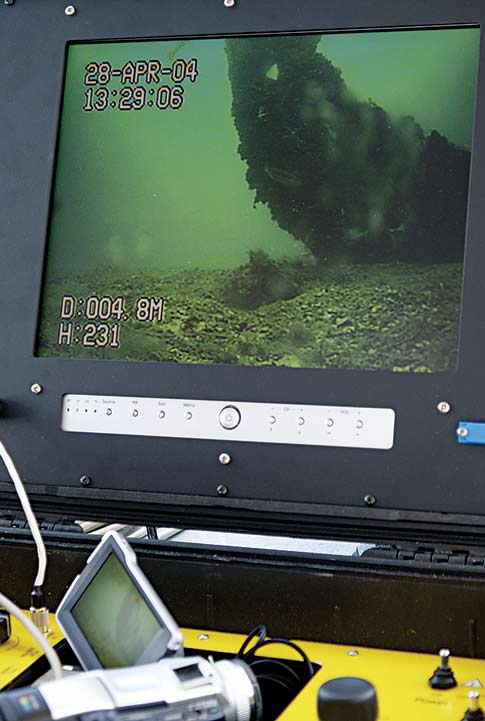 Real-time video is taken of a sunken lifeboat’s bow from a remotely operated vehicle (ROV). 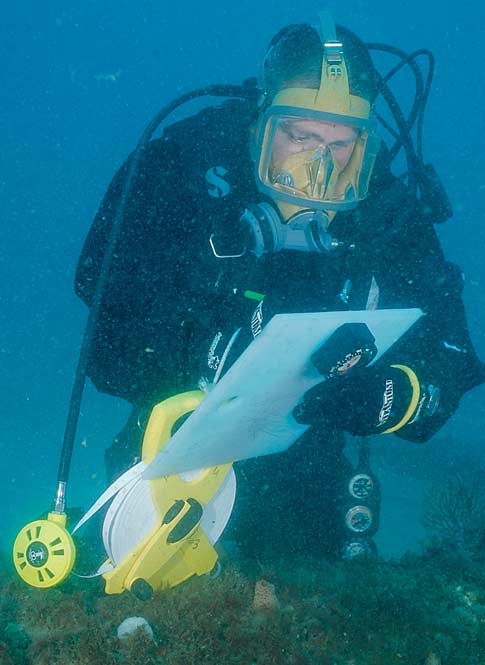 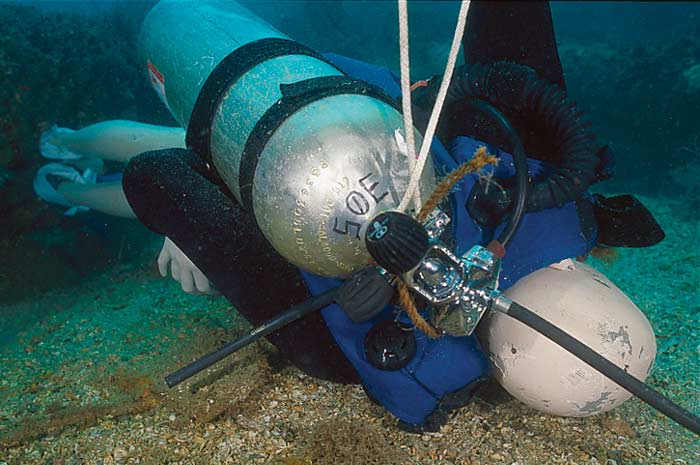 A mannequin in dive regalia is part of the crime scene scenario.