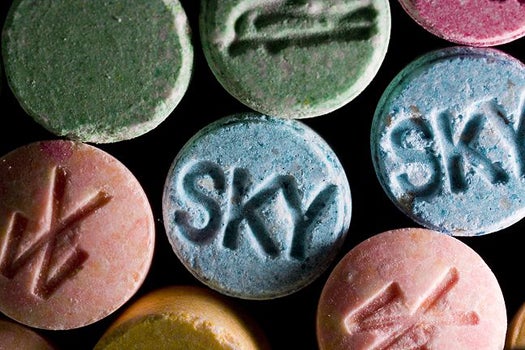 According to CBC News:

Provincial Health Officer Dr. Perry Kendall says while the pure form of the drug has been proven safe in controlled clinical trials by psychiatrists, the type of ecstasy sold on the street is laced with potentially dangerous impurities.

Ecstasy is one of a few names for MDMA, or 3,4-methylenedioxy-methamphetamine, the popular dance drug banned in the U.S. in 1985. The term ecstasy typically refers to the drug in a pressed pill form that might be laced with other substances besides MDMA. It also goes by the name molly, a powder or crystal form of MDMA that has a reputation for being “pure” MDMA, and thus, safer.

On its own, MDMA produces feelings of euphoria and connectedness, decreasing activity in the amygdala, a region of the brain associated with the fear response, and increasing activity in the pre-frontal cortex, where higher-level brain processing occurs. Like psychedelics such as LSD or magic mushrooms, it increases the level of the neurotransmitter serotonin in your brain, and possibly due to greater levels of the hormone prolactin, it also creates a kind of post-orgasmic state.

MDMA was used in psychotherapy in the 1970s and early ’80s, but in 1985, it was classified as a Schedule I drug, meaning the government considers it a dangerous substance with high potential for abuse and no acceptable medical use. There are a couple unappealing side effects that have been observed with recreational ecstasy use: People have died of both dehydration and over-hydration (which causes brain swelling, ew) after taking MDMA, and it increases your blood pressure, so it can potentially lead to a stroke. At high doses, studies have found it can cause hyperthermia, or overheating, though there has been some debate over whether or not the MDMA itself can cause significant hyperthermia without overexertion.

“It’s a lethal side effect,” says Edward Mills, an associate professor of pharmacology and toxicology at the University of Texas at Austin. “It’s rare, but it happens commonly enough.” Mills studies the way ecstasy increases body temperature in animals. MDMA activates the sympathetic nervous system, the same nerves that generate fevers.

Other reported side effects have been somewhat overblown. A 2003 paper claiming ecstasy causes permanent brain damage not unlike Parkinson’s Disease, for example, was retracted because it turned out the researcher administered the wrong drug. The potential neurotoxicity of MDMA–whether or not it damages the nervous system and the brain–is still contested.

Michael Mithoefer, a private psychiatrist in Charleston, South Carolina, has been working on using MDMA in psychotherapy to treat PTSD since 2000. In his research, he uses MDMA made in a university lab that’s registered with the FDA as more than 99 percent pure. So far he’s only seen short-term side effects, like dizziness, impaired balance and anxiety.

“Nothing is completely safe,” he says. “We’re using it in a very controlled setting,” with patients that are screened and monitored carefully, he explains. “It’s a favorable risk-benefit ratio, but that does not mean that even pure MDMA can’t be dangerous.”

The Multidisciplinary Association for Psychedelic Research (MAPS), which sponsors Mithoefer’s MDMA research and wants to make it a prescription medicine for use in psychotherapy, says “In laboratory studies, pure MDMA—but not Ecstasy—has been proven sufficiently safe for human consumption when taken a limited number of times in moderate doses.”

MAPS doesn’t endorse ecstasy because most ecstasy isn’t pure MDMA — it’s often cut with a some unknown filler, as are other drugs like heroin and cocaine. Both caffeine and ephedrine, another stimulant, serve as common fillers for ecstasy because they look and function somewhat similar to MDMA, but are cheaper to obtain. They share some of the speed-like effects of ecstasy, though they don’t give you the same increase in empathy and emotional openness.

There’s also a lot of hand-wringing about how kids these days think “molly” is purer, safer MDMA (Details likened its reputation to that of organic fruit). But whether or not an adulterant makes your MDMA experience more or less dangerous depends, of course, on what it is. If your pill or powder is laced with something like baking soda, the toxicity of the MDMA would actually be diluted.

“If the adulterant is caffeine or ephedrine, you can get a combination of toxic effects that can be as bad or greater than MDMA alone,” Mills says. “They may enhance each other’s toxicity, but definitive studies haven’t been done.”

In both Canada and the U.K. recently, people have died after what they thought were ecstasy pills turned out to contain a toxic chemical called PMMA, or “Dr Death.”

Ecstasy’s toxicity is a scientific mystery because it lacks a clear “dose and response effect,” according to Mills–one person might get sent to the hospital after one pill, while someone else can take 50, no problem. How many people actually die a year from ecstasy-related causes is hard to pin down, but according to the Substance Abuse and Mental Health Services Administration, there were 22,816 MDMA-related emergency room visits in 2009.

For Mithoefer’s study, under controlled clinical conditions with research-grade, pure MDMA, the drug didn’t show any long-term side effects. Trials of MDMA-assisted PTSD therapy have also been completed in Switzerland and gotten underway in Vancouver.

As for recreational drugs, it’s pretty much impossible to tell whether what you’re buying is 100 percent pure. You can buy test kits to check for some common adulterants. If your drug dealer happens to press his pills with baking soda, a less pure dose could actually be a bit safer, though the effects you’re paying for will also be lessened. Other than that, you’re probably better off with a purer dose of MDMA, rather than something that might be laced with a substance with Death in its nickname.