Spring 2012 Was The Earliest On Record

A prematurely sprung spring caused trouble with crops, insects, and pollen, according to a new report. 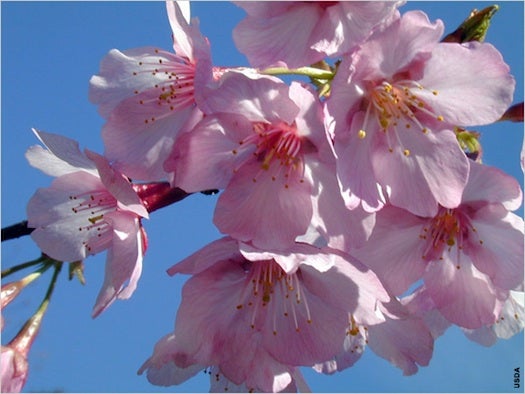 Remember the 80-degree days and early daffodils last March? It wasn’t just an early spring. For much of the U.S., it was the earliest spring since 1900, when systematic weather records became available for the entire U.S., according to a new study from the U.S. Geological Survey.

The central and eastern U.S. saw spring come 20 to 30 days early, the study says, although the effect wasn’t uniform across the country: The northwest and southern parts of Florida had unusually late springs in 2012.

It’s very difficult to attribute any one weather event to global warming, but climate change may bring early springs more often in the future, survey scientists wrote in their study.

While seeing the sun sooner in the year was fun, the early spring of 2012 had some ill effects. The New York Times reported insects appearing early and increased pollen allergies in some states. The state of Michigan sustained $500 million in fruit crop damage after an April frost destroyed the early flowerings of trees, according to the U.S. Geological Survey.

How exactly did survey scientists calculate the arrival of spring? They used measures from phenology, the science of when annual stuff happens in living things. (Not to be confused with phrenology.) Flowers blooming, birds migrating and deciduous trees re-leafing are all examples of phenology measures. U.S. scientists began making such observations on a larger scale in the 1950s, while hobbyists had kept flower diaries for decades before that. Now, the USA National Phenology Network, which includes a website where non-scientists are able to submit their observations, helps scientists keep track of the signs of spring.

Because unusual seasons are so disruptive to agriculture, scientists want to develop ways of predicting when an early spring will occur. That may be possible by correlating historical phenology records with atmospheric phenomena, such as the movement of pressure systems, survey scientists wrote in their paper. They published their work May 14 in the journal Eos.