What Are Your Picks For The Best In Cli-Fi?

Nominate the best in pop culture about global warming for a "climate fiction" award. 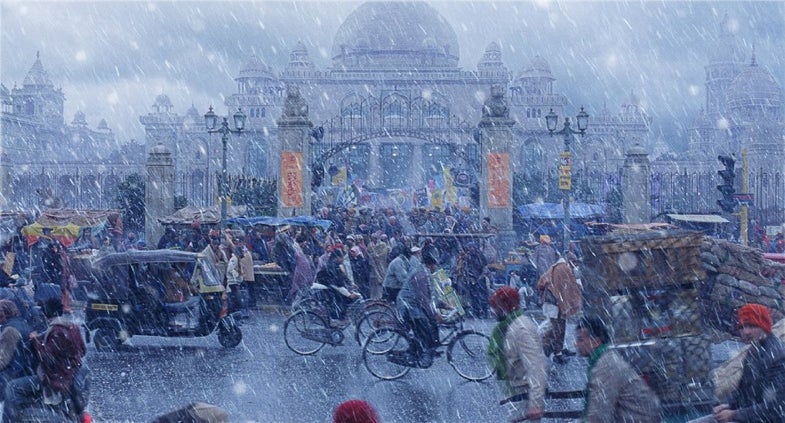 Dan Bloom of The Wrap writes that he is organizing new annual film award: the “Cliffies,” given for excellence in “cli-fi” movies, as in climate fiction.

Problem is, few movies about global warming or its impacts appear in any given year–particularly those that deal with them fairly directly, instead of using climate change as a dystopian backdrop to some other kind of story. So for now at least, Bloom’s proposition has wobbly legs.

But what would happen if we opened up the field up to other kinds of pop culture, as well as the full lineage of climate-disruption fiction that’s appeared over the better part of the past half-century?

Thank you, readers, for answering that question on Twitter and Facebook; even for those nominations I disagreed with. (Good online manners much appreciated.)

We’ve still got plenty of categories left to cover, though like Directing; Actor, Female; Costumes; Special Effects; and any other movie or TV award categories you’d care to make the case for. And how about the best comic or graphic novel about global warming? The best YA fiction? Best music? Please tweet your nominations to @ejgertz

Here are the un-scientific, un-audited results so far:

Full Disclosure: Patrick and I are longtime companions, and co-authors on two books for Maker Media.

Honorable Mention: The Day After Tomorrow (2004)

Why: “I don’t know that it was the best, but The Day After Tomorrow was big, loud, and about as climate focused as any cli-fi film I can think of. “

Why: Robinson’s characters, mostly heroic and anti-heroic scientists, debate whether and how to change the Red Planet’s climate, geology, and environment: “Reds” want to keep Mars wild and largely unaltered, while “Greens” advocate total transformation of the surface to make it more easily human-habitable. Their moral and ethical arguments are proxies for contemporary fights across the spectrum of global warming politics today. “KSR’s Mars is a macrocosm of climate policy on earth, a ‘take two’ which is also fundamentally connected to earth,” writes @misterinteger.

I’d add that Robinson’s speculations on how 21st century human societies respond to the pressures of severe climate disruption ring plausible–from government by corporations, to the politics of scarcity, the future of energy, solar system colonization, and geoengineering technologies. Some are already proving prescient.

Robinson is already an acclaimed science fiction great; The New Yorker recently called him “one of the most important political writers working in America.”

Why: “Not as bad as you remember, though pretty bad.”

In this disaster epic’s vision of the future, every bit of land-bound ice on Earth has melted, raising the global ocean and flooding the continents. Humanity is turned out upon the vast sea on a ragtag fleet of ocean-going rafts; fresh water and food become commodities worth killing for. Long, slow, and confusingly written, but worth the watching for a web-fingered Costner drinking his own filtered urine.

Why: “Sterling’s been engaged with climate issues a lot longer than most. I’m thinking of Heavy Weather specifically, but also his work with Viridian Design.“

On a personal note, Heavy Weather is a personal favorite, and the Viridian Movement that Sterling founded in the 1990s was a primary source for the Worldchanging blog and book that I contributed to several years ago.

Why: State of Fear, a thriller/polemic by the late TV producer, director, and novelist Michael Crichton, has arguably done more to advance crank global warming science than any other work of pop culture. Among its impacts, Crichton was invited to testify before the powerful U.S. Senate committee on Environment and Public Works in 2005, an opportunity he used to vilify the research findings of respected climate scientist Michael Mann.

“Dead of cancer. And a medical doctor, too. I hate to see people felled by this great scourge. I feel sorry for his family,” wrote Bruce Sterling upon Crichton’s death in 2008. “Still – the guy missed an awesome chance to be snatched out of his writing-chair and torn to pieces in broad daylight by a freak climate-crisis windstorm. That might have made up for the harm he did. I’d like to say that Dr Crichton’s contemptibly paranoid view of climate politics will be missed, but… well…”