Scientists used lasers to make the coldest matter in the universe

The atoms were chilled to within a billionth of a degree of absolute zero. 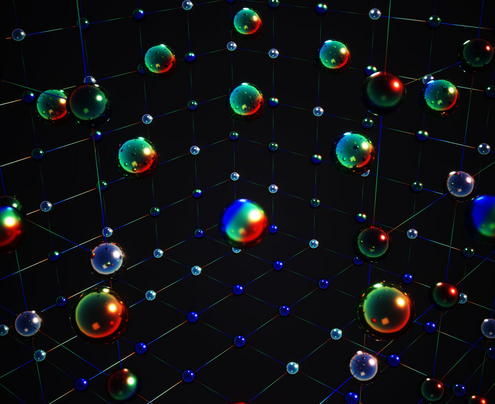 The simulator uses up to 300,000 atoms, allowing physicists to directly observe how particles interact in quantum magnets whose complexity is beyond the reach of even the most powerful supercomputer. Image by Ella Maru Studio/Courtesy of K. Hazzard/Rice University
SHARE

In a laboratory in Kyoto, Japan, researchers are working on some very cool experiments. A team of scientists from Kyoto University and Rice University in Houston, Texas has cooled matter to within a billionth of a degree of absolute zero (the temperature when all motion stops), making it the coldest matter in the entire universe . The study was published in the September issue of Nature Physics, and “opens a portal to an unexplored realm of quantum magnetism,” according to Rice University.

“Unless an alien civilization is doing experiments like these right now, anytime this experiment is running at Kyoto University it is making the coldest fermions in the universe,” said Rice University professor Kaden Hazzard, corresponding theory author of the study, and member of the Rice Quantum Initiative, in a press release. “Fermions are not rare particles. They include things like electrons and are one of two types of particles that all matter is made of.”

The Kyoto team led by study author Yoshiro Takahashi used lasers to cool the fermions (or particles like protons, neutrons, and electrons whose spin quantum number is an odd half integer like 1/2 or 3/2) of ytterbium atoms to within about one-billionth of a degree of absolute zero. That’s roughly 3 billion times colder than interstellar space. This area of space is still warmed by the cosmic microwave background (CMB), or the afterglow of radiation from the Big Bang… about 13.7 billion years ago. The coldest known region of space is the Boomerang Nebula, which has a temperature of one degree above absolute zero and is 3,000 light-years from Earth.

[Related: How the most distant object ever made by humans is spending its dying days.]

Just like electrons and photons, atoms are are subject to the laws of quantum dynamics, but their quantum behaviors only become noticeable when they are cooled to within a fraction of a degree of absolute zero. Lasers have been used for more than 25 years to cool atoms to study the quantum properties of ultracold atoms.

“The payoff of getting this cold is that the physics really changes,” Hazzard said. “The physics starts to become more quantum mechanical, and it lets you see new phenomena.”

In this experiment, lasers were used to to cool the matter by stopping the movements of 300,000 ytterbium atoms within an optical lattice. It simulates the Hubbard model, a quantum physics first proposed by theoretical physicist John Hubbard in 1963. Physicists use Hubbard models to investigate the magnetic and superconducting behavior of materials, especially those where interactions between electrons produce collective behavior,

This model allows for atoms to show off their unusual quantum properties, which include the collective behavior between electrons (a bit like a group of fans performing “the wave” at a football or soccer game) and superconduction, or an object’s ability to conduct electricity without losing energy.

“The thermometer they use in Kyoto is one of the important things provided by our theory,” said Hazzard. “Comparing their measurements to our calculations, we can determine the temperature. The record-setting temperature is achieved thanks to fun new physics that has to do with the very high symmetry of the system.”

[Related: Chicago now has a 124-mile quantum network. This is what it’s for.]

The Hubbard model simulated in Kyoto has special symmetry known as SU(N). The SU stands for special unitary group, which is a mathematical way of describing the symmetry. The N denotes the possible spin states of particles within the model.

The greater the value of N, the greater the model’s symmetry and the complexity of magnetic behaviors it describes. Ytterbium atoms have six possible spin states, and the simulator in Kyoto is the first to reveal magnetic correlations in an SU(6) Hubbard model. These types of calculations are impossible to calculate on a computer, according to the study.

“That’s the real reason to do this experiment,” Hazzard said. “Because we’re dying to know the physics of this SU(N) Hubbard model.”

Graduate student in Hazzard’s research group and study co-author Eduardo Ibarra-García-Padilla added that the Hubbard model aims to capture the very basic ingredients needed for what makes a solid material a metal, insulator, magnet, or superconductor. “One of the fascinating questions that experiments can explore is the role of symmetry,” said Ibarra-García-Padilla. “To have the capability to engineer it in a laboratory is extraordinary. If we can understand this, it may guide us to making real materials with new, desired properties.”

The team is currently working on developing the first tools capable of measuring the behavior that arises a billionth of a degree above absolute zero.

“These systems are pretty exotic and special, but the hope is that by studying and understanding them, we can identify the key ingredients that need to be there in real materials,” conculed Hazzard.