Flacco has a killer arm. What makes him--and other pro quarterbacks--so special? 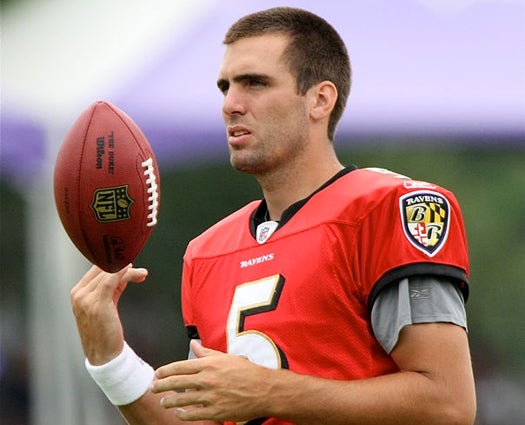 As Super Bowl XLVII approaches, NFL fans are debating and predicting what will give the Baltimore Ravens the edge over the San Francisco 49ers, and vice versa. In the Ravens’ corner: quarterback Joe Flacco, who might have the strongest arm in the NFL. In college, he won the distance throwing competition in ESPN’s State Farm College Football All-Star Challenge with an improbably awesome 74-yard toss. He takes advantage of that ability, too: In October, he was tied in the NFL for number of deep passes thrown 20 yards or more. That just does’t seem fair. Why does Flacco get the mutant-like throwing ability?

Don’t be too jealous; a monster throw doesn’t come easy. The forward football toss has been called “the most complex motor skill in all of sports.” Every part of the body gets used in one chain of events, and one smidgen’s difference in that chain can affect the throw. The ball has to make it to the receiver in a window of plus-or-minus one-tenth of a second, says Dr. Timothy Gay, University of Nebraska–Lincoln professor and author of Football Physics: The Science of the Game. Try to do that over 60 yards, as Flacco has before, and it’s exponentially more difficult. All of that isn’t even factoring in the defense (about 250 pounds of flesh each) barreling down to murder you.

Joe Flacco is most renowned for being able to fire the ball long distances. (His Super Bowl opponent, Colin Kaepernick, is good at that, too, but Kaepernick’s longest pass play of the season was for 57 yards, compared to Flacco’s 61.) Here’s a highlight reel where you can see one of Flacco’s space-bound Hail Marys at about 1:40.

After Gay watched the clip, he mentioned how Flacco’s form looks different from that of most quarterbacks. Usually, a distance throw involves a full-body motion, stepping and rotating with the torso, and moving the arm across a full arc. You can tell Flacco has above-average arm strength based on the way he throws that bomb while focusing on just his arm. It’s an unusual way to throw, but not necessarily a bad one. It’s also worth pointing out that Flacco isn’t an enormous, brutish player–to an outside observer, he might even look a little on the spindly side. Arm strength doesn’t necessarily mean big muscles; it’s an entire body working in sync that contributes to a certain style. Flacco has a build that happens to work well for a blunt throw that maximizes distance.

Of course, distance on its own isn’t all that hard. A linebacker with a football can chuck a ball pretty far, Gay said, but it’s accuracy over distance that’s important. Different quarterbacks (with different musculatures) throw differently, and someone like Flacco probably errs closer to linebacker than lithe finesse thrower. He lets the ball go and sends it super-humanly far, but at the cost of accuracy. For example: Although Flacco attempts more deep passes than almost anyone else, as of October, his accuracy for those passes ranked 20th in the NFL. (Which is bad.)

A John Elway-type player and a Tom Brady-type player aren’t the same, and what makes a good throw for them isn’t identical.But that’s a style engineered by Flacco and his coaches. At an elite level, what Gay calls “an acceptable variation in styles” is what separates one QB from the next, and a particular QB’s musculature dictates which style works best. There’s no 100-percent “correct” way to throw a football, Gay says, but at the very top of the football food-chain–like in, say, the NFL–everyone has pretty much mastered the do’s and don’ts, and the wiggle room can nudge someone into greatness. A John Elway-type and a Tom Brady-type aren’t the same, and what makes a good throw for them isn’t identical. He mentions quarterback Terry Bradshaw, who used the alternate (but not necessarily better or worse) method of keeping a finger on the ball’s point, giving his throws extra oomph. “It comes down to a specific technique,” Gay says, “which is probably different for different quarterbacks.”

For Flacco, that means a lot of deep passes. It’s closer to how he was built to throw, and the style works well for him and the Ravens. We’ll see Sunday if that helps them take the big game.