What’s The Flavor Difference Between Scotch And Rye? [Infographic]

The many flavors of the great wide world of whiskey. Yes, bacon fat is an option. 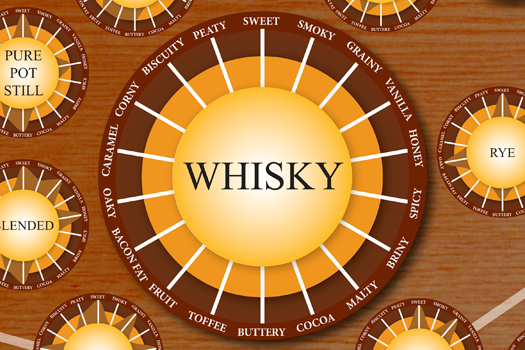 Can’t quite tell the difference between a Speyside Scotch malt and an Islay? Want to sound sophisticated comparing the flavor profiles of a proper Kentucky bourbon versus a Tennessee whiskey?

Enter Sean Seidell, a Philadelphia-based graphic designer who has a knack for visualizing the the many flavors of our favorite foodstuffs. He’s previously taught us all we need to know about cheese, beer and coffee. Now he’s taken on the taste of whiskeys, from Irish single malt to blended Scotch to American corn.

So it appears that the difference in flavor you get in a rye whiskey, which can come from either the U.S. or Canada, and a Scotch, which are made from malt or grain (or a blend) and has to be aged for at least three years, is that ryes tend to be a little spicy, while Scotches have a bit more of a honey flavor. Irish whiskies are generally sweet and oaky, and a good Canadian single malt should have a vanilla taste.

Plus, now we know which whiskeys to stay away from to avoid that peaty taste (Highland and Islay Scotch, though the latter is the only option with hints of bacon fat). Most varieties share an oaky flavor, since many are aged in oak casks, and many have a buttery taste. But have you been detecting the slight eau de biscuit in Canadian rye?