Chinese researchers have developed a new technique for isolating kidney cells from urine and turning them into neural progenitors. Not as gross as it sounds! 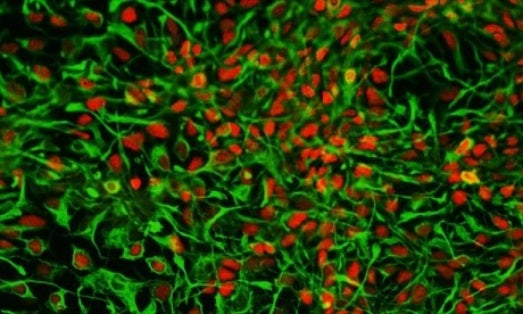 It turns out urine isn’t just human waste. Chinese researchers have managed to reprogram kidney cells harvested from urine samples into neural cell progenitors–immature brain cells that can develop into various types of glial cells and neurons. Reprogramming cells has been done before, of course, but not with cells gleaned from urine and not via a method this direct (more on that in a moment). The technique could prove extremely helpful to those pursuing treatments for neurodegenerative disorders like Parkinson’s and Alzheimer’s.

The innovation here is in the source and the method. We know that embryonic stem cells offer potential treatments for neurodegenerative disorders. And we know that we can turn adult human cells–that is, non-embryonic cells gathered from adult humans–into pluripotent cells (those that can become a different type of cell) by reprogramming them, usually with genetically engineered viruses that tamper with the cells’ genetic codes.

But embryonic stem cell treatments are fraught with ethical issues and non-embryonic methods are complicated–and complexity introduces a greater chance of something going wrong (in this case that means mutations and genetic defects). The new method, which taps skin-like cells from the linings of the kidney tubes that are present in urine, converts its source cells into neurons and glia cells via a more direct route, making the process more efficient while narrowing the margin of error.

In their study, the researchers harvested kidney cells from the urine samples of three human donors and converted the cells directly to neural progenitors. Rather than using a genetically engineered virus to reprogram the cells, they used a small piece of bacterial DNA that can replicate in the cellular cytoplasm, a technique that eliminates the need to tamper directly with the chromosome (in theory, at least, this should reduce mutations) while also speeding up the entire process. After growing their progenitors into mature neurons and glial cells, the researchers transplanted the progenitors into the brains of newborn rats. A month later, the cells were still alive in the rats’ brains, though it is not yet clear that they can survive for extended periods or mesh with the brain’s wiring to become functioning parts of the neural machine.

There’s still a lot of research to be done on this method of course, but the researchers think it may provide a way to take cells gathered non-invasively and quickly and efficiently convert them into neural cells while reducing the likelihood of genetic mutations.