Can be used to study brain function, or just to look cool All the new breakthroughs in microscopy we’ve seen recently are designed to help scientists see deeper, inside individual cells and into the depths of the brain. Of course, this would be easier to do if there wasn’t a bunch of other tissue blocking the cells you want to see. Japanese researchers have a new solution: Make it all transparent.

A new chemical reagent makes the brain see-through, allowing fluorescent tags to light up neurons and blood vessels deep inside. This enables 3-D images of entire structures, without having to cut anything away or divide anything into smaller sections.

It doesn’t work on living tissue, at least not yet — researchers at RIKEN, Japan’s major research institute, are investigating another, milder reagent that could allow them to study live tissue in this way.

The reagent, called Scale, has specific clarifying properties that do not alter the overall shape or proportion of the sample being washed, according to a news release from RIKEN. First you would have to genetically modify the sample by adding fluorescent proteins to tag certain cells. While it turns the tissue transparent, the Scale method also prevents decreasing the intensity of those fluorescent signals. So once the tissue is washed with Scale, researchers can see the fluorescent proteins flashing.

The fluorescent tags have made it possible to visualize brain regions at a depth of several millimeters, far better than before, and to reconstruct neural networks, RIKEN says. Atsushi Miyawaki and his team at the RIKEN Brain Science Institute have already used it to study neuronal networks among the cerebral cortex, hippocampus and white matter of mouse brains.

It can work on several other tissues besides the brain, the researchers say — they plan to try Scale on the heart, muscles and kidneys, and on tissues from primate and human biopsy samples. The work was published this week in Nature Neuroscience. 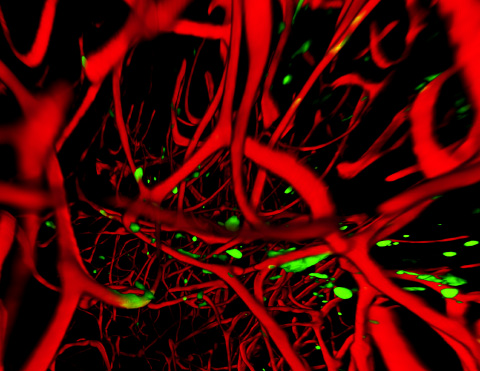 Nuclei in the Brain