Teenage Gamers Are Better At Virtual Surgery Than MDs

A UTMB Galveston study put the two groups head-to-head to see which would perform better using virtual surgery tools. All those videogames paid off. 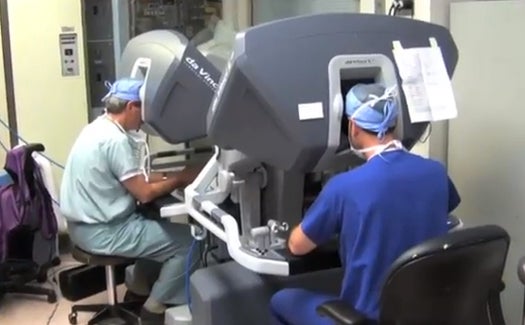 A lot of people see videogames as the archetypal time-waster. That’s silly, and there have been a lot of studies that show why. The latest? Researchers have found that high school- and college-age gamers are better virtual surgeons than medical residents.

Scientists from University of Texas Medical Branch at Galveston had a hunch that students with a regular videogame diet (high school sophomores who played two hours of games a day and college students who played four) would be primed for virtual surgery tools. They were right. When performance with those tools was measured, the game-playing students did better than a group of residents at UTMB. It was only slightly better, but still. Kinda makes you wonder: Who do you really want poking you with needles, a prim Harvard-educated resident or a slovenly high school kid who spends Friday nights playing Call of Duty?

The study used a machine that replicated surgeries–suture this, pass off that needle, etc. It then measured the users’ competency based on how well they did the tasks, including the tension they put on their instruments and their overall hand-eye coordination. The high school students did best, followed by the college group, followed by the UTMB residents.

For something to compare the results to, researchers also had the groups perform simulations without the gaming-type robotic aid used in the first test–an experiment that tested a different set of cognitive traits. The young gamers got trounced by the residents in that field.

This doesn’t mean we all need to rush to get our surgeons the latest copy of Halo 4. Most physicians working today, researchers note, weren’t trained with robotic surgery tools. But having the same gaming background as the students probably wouldn’t hurt, and researchers say we should reconsider how to train surgeons from the Xbox Generation.