It’s not artificial intelligence in the Turing test sense, but the technicolor ring you see above is actually an artificial... 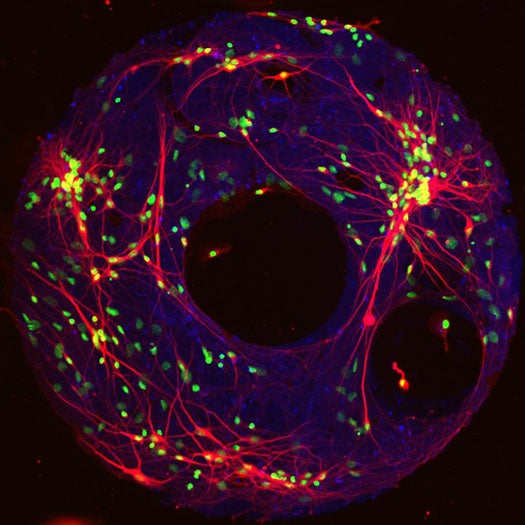 It’s not artificial intelligence in the Turing test sense, but the technicolor ring you see above is actually an artificial microbrain, derived from rat brain cells–just 40 to 60 neurons in total–that is capable of about 12 seconds of short-term memory.

Developed by a team at the University of Pittsburgh, the brain was created in an attempt to artificially nurture a working brain into existence so that researchers could study neural networks and how our brains transmit electrical signals and store data so efficiently. The did so by attaching a layer of proteins to a silicon disk and adding brain cells from embryonic rats that attached themselves to the proteins and grew to connect with one another in the ring seen above.

But as if the growing of a tiny, functioning, donut-shaped brain in a petri dish wasn’t enough, the team found that when they stimulate the neurons with electricity, the pulse would circulate the microbrain for a full 12 seconds. That’s roughly 12 seconds longer than they thought it would (they expected the pulse to live for about a quarter of a second).

That’s essentially short-term memory. The neurons were relaying the signal in sequence, persistently, mimicking the activity we know as working memory (though admittedly we don’t understand it that well). The brain is basically storing the stimulus long after the stimulus is no more, which is a big deal for a tiny brain grown in a dish.