Neurologists love picking the brain, but getting in there can be both difficult and dangerous, and once inside it’s tough... 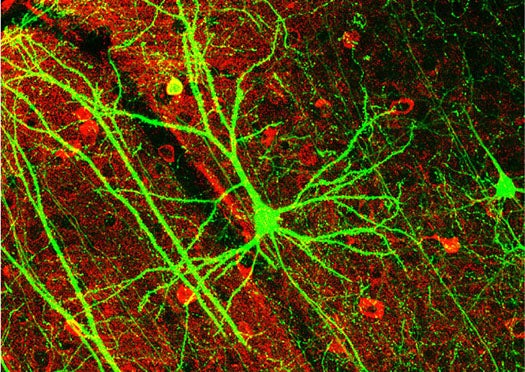 Neurologists love picking the brain, but getting in there can be both difficult and dangerous, and once inside it’s tough to make the brain do exactly what you want. But researchers at medical device maker Medtronic are developing a neural implant that uses light to manipulate the neurons in the brain in a far more controlled fashion than current electrical therapies. All they need to do is genetically tamper with your brain first; no big deal.

Current neural implants that treat Parkinson’s disease and other neurological disorders work by shocking localized neural networks into action. But while they’ve enjoyed measured success, there are some serious drawbacks to these therapies. They stimulate neurons indiscriminately, and can produce interference that makes it difficult for researchers to observe quieter neural signals. It’s also limited by the fact that it generally only causes neurons to fire; it’s very difficult to coax them into remaining silent instead, making the therapies more or less one-sided.

But by introducing a couple of genes into specific neuron clusters, researchers can make the cells there sensitive to certain wavelengths of light: blue light to make neurons fire and yellow to shut them off. An implant similar to current electrical implants then delivers light to the adjusted neurons via a small fiber optic wire. As a result, researchers have more control when experimenting with neural disorders as well as when treating conditions, and that could lead to some superior neuroscience in the near term.

Medtronic is a business, and as such the company plans to use findings from the optogenetic neuromodulators to improve the electrical stimulators (the ones that have already passed muster with the FDA) that they already sell. But that’s not to say optogenetic devices won’t find their own place as independent treatment methods. As the science comes along, researchers hope to employ optical therapies directly as treatments for those suffering from neural disorders.

For commercialization to be successful, the company first needs to find a way to deliver the gene therapy to the proper neural networks safely, a goal several academic institutions and biomed companies are working feverishly toward. After all, the idea of someone tinkering with the genetic makeup of one’s nerve center is unsettling to say the least, and they’ll have to prove they can do it consistently and safely before regulatory bodies will jump on board. But in the meantime, optogenetic neuromodulators can hopefully teach us a lot more about the way our neural processes work, and hopefully bring scientists that much closer to getting all the way inside our heads.