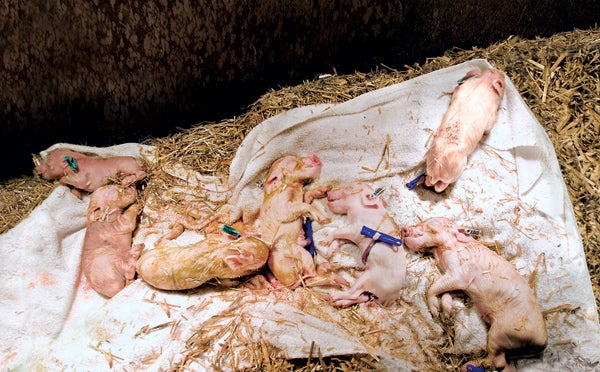 The piglets rest after their delivery.

In the search for disease treatments, the next best thing to human guinea pigs is, well, actual pigs. Believe it or not, their skin and cardiovascular, digestive, urinary and central nervous systems are all very similar to ours. That’s why, in recent decades, scientists have established swine models for osteoporosis, heart disease, diabetes, kidney disease and urinary-tract disorders. Mini-pigs, in particular, which weigh about 70 pounds, are easy to examine using hospital scanners and can undergo the same surgical procedures as we do. In fact, most medical students practice on anesthetized pigs before moving on to people. Pigs are also good subjects for behavioral studies such as those necessary for research on Alzheimer’s disease, the fatal form of dementia that affects an estimated 4.5 million Americans over the age of 65. It’s the sixth leading cause of death in the U.S. and costs the nation $100 billion annually.

Last year, a multidisciplinary team of scientists from two Danish institutions, Aarhus University and the University of Copenhagen, began using pigs to study Alzheimer’s. But not just any pigs. The researchers created transgenic pigs—animals whose genomes contain genes from another species. In this case, human genes.

According to Arne Lund Jørgensen, who is leading the study at Aarhus, pigs could suffer from Alzheimer’s as humans do. “A porcine model shows that the pig brain has the metabolic pathway to produce Alzheimer’s-like pathology,” he says. This could offer an improved understanding of the mechanisms involved in the disease and bring scientists closer to better treatments or even the ever-elusive cure.

The researchers achieved two firsts: Their transgenic pigs are the first to carry a human Alzheimer’s gene, and they’re the first pigs produced by a relatively new method called handmade cloning. 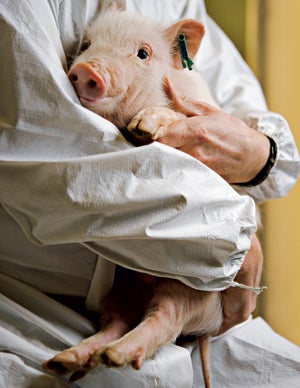 A Pig in Hand

A researcher holds one of the pigs that may further our understanding of Alzheimer’s disease.

To introduce the disease gene, Jørgensen’s team first removed a fibroblast from an adult female pig. The Alzheimer’s gene was then inserted into the fibroblast. Once the scientists determined that the Alzheimer’s gene was active inside the cell, they allowed it to multiply. They then prepared the pig ova—the cell that will eventually grow into the piglet—to accept the fibroblast’s genetic material. To do this, Gábor Vajta, a cloning expert and an affiliate professor at the University of Copenhagen, used a method he developed in 2001. The key: using enzymes to dissolve the zona pellucida, or outer membrane, of the egg. This allowed the scientists to easily manipulate the egg cell’s components by hand, rather than using micromanipulators, tiny instruments used in traditional cloning [for more on this process see “[An Easier Way to Clone” on the last page].

Vajta then fused the fibroblast carrying the Alzheimer’s gene with the egg cell, which was electrically and chemically stimulated to ultimately become a blastocyst, an embryonic phase. The team produced 40 to 50 identical blastocysts using Alzheimer’s fibroblasts that had multiplied from the original. Veterinarians implanted these blastocysts into a sow.

The impregnation resulted in seven identical piglets born in the summer of 2007. Three months later, an autopsy on one piglet showed that the Alzheimer’s gene was indeed active in its brain. The researchers will now watch the remaining pigs age, with the hope that the disease will progress in the same way it does in humans.

What We Know So Far

The heritable form of the disease, also known as early-onset Alzheimer’s, is the result of a genetic mutation passed down in families. It is the cause of between 5 and 10 percent of cases. Late-onset Alzheimer’s, which appears after age 60 in people who usually don’t have a family history of the disease, accounts for the rest. Both forms lead to the destruction of nerve cells and neural connections in the cerebral cortex of the brain. The condition destroys memory and causes confusion, disorientation and, eventually, death. Despite intensive research, Alzheimer’s disease is poorly understood, and doctors still lack medical treatments to prevent the brain damage it causes. 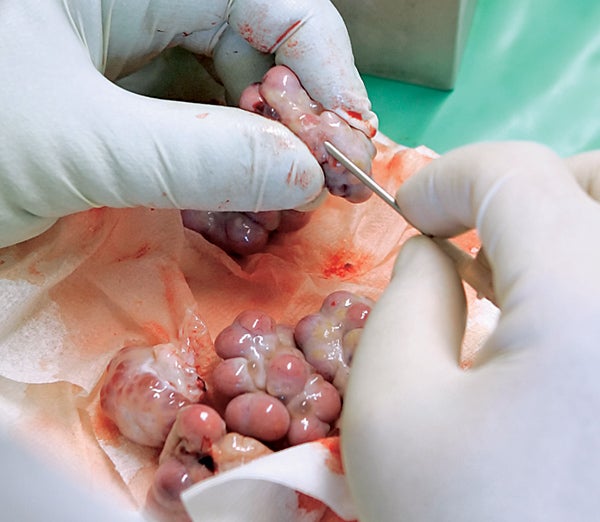 A scientist harvests eggs from pig ovaries and places them in test tubes.

The process of neurodegeneration begins when enzymes snip a component of nerve cells into small pieces. The resulting protein, called beta-amyloid, accumulates in clumps between the cells. Some of these clumps eventually become large plaques. According to Samuel Gandy, a professor of Alzheimer’s-disease research at the Mount Sinai School of Medicine in New York City, amyloid protein outside the nerve cells causes the formation of what are called neurofibrillary tangles inside neurons. Here, a normal component called tau protein accumulates in the twisted fiber proteins. As the disease progresses, brain cells die and the brain itself shrinks, although it’s unknown exactly how the two proteins influence cell death. The disease starts in the hippocampus, a part of the brain involved in learning and memory, and later spreads to the rest of the brain.

Although these major steps have been mapped through brain scans and autopsies, scientists need to study_ how_ the disease progresses. That’s where the pigs come into play. If all goes as planned, the pigs should show signs of brain pathology at age two, which in pig years corresponds to the age when people with early-onset Alzheimer’s begin to exhibit symptoms. 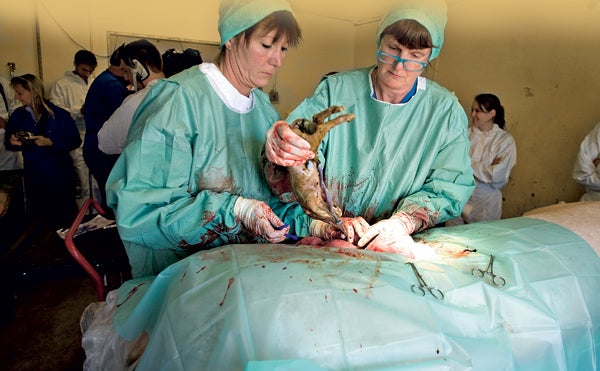 Veterinarians in Denmark delivered the seven piglets by cesarean section.

Mouse models for Alzheimer’s have never been able to simulate anything comparable to the last stages of the disease. “Plaque-forming mice do not show extensive nerve-cell death,” Gandy says. “It’s nothing like human Alzheimer’s.” But the research group has good reason to believe that their work in pigs will be more successful than the studies in mice. Research indicates that pigs’ nerve cells may possess the biochemical machinery needed to trigger the disease, Jørgensen says. The scientists will use computerized axial tomography and positron-emission tomography (PET) scanners—the same devices that help diagnose Alzheimer’s in humans—to detect the two destructive proteins, beta-amyloid and tau, in early stages. To find beta-amyloid, for instance, the scientists can inject a chemical substance into the bloodstream that attaches to the protein deposits in the brain. If amyloid clumps are present, the substance will accumulate there and be detectable on PET scans. In the later stages of the disease, researchers will be able to follow the progressive death of neurons in the brain using the scanners.

The technology will allow researchers to study for the first time the long-term effects of the disease. “Because the cloned pigs are genetically identical, we expect the pathological changes we find in one pig to be present in the others,” Jørgensen says. This will enable researchers to correlate pathological- disease development with changes in behavior.

One very early behavioral symptom the researchers will look for is a diminished sense of smell. They will also test for a loss of memory and spatial recognition by placing the pigs in a room with four compartments, one of which contains a reward. Healthy pigs quickly learn which compartment contains the reward and go right to it. The pigs with Alzheimer’s, however, will probably have a harder time remembering which compartment holds the reward.

To further test memory, the pigs will be put in a room with two toys. The following day, one of the two toys will be replaced. Healthy pigs spend more time examining new objects, but once the diseased pigs’ memories begin to diminish, it’s expected that they will spend the same amount of time sniffing both the old and new toys.

If Alzheimer’s progresses in pigs as it does in humans, the animals will give us more than just a better understanding of the disease. Transgenic pigs may also one day become test subjects for Alzheimer’s drugs, helping scientists develop better treatments for humans.

Thanks to their longevity, pigs will ideally provide new possibilities for understanding and treating diseases in which an organ’s function slowly degrades. Currently, pig genetic sequencing is conducted on an experiment-by-experiment basis—a costly, lengthy process. In 2001, scientists began sequencing the complete pig genome which the international Swine Genome Sequencing Consortium expects to publish by early 2010. With both this and the human genome in hand, transgenic pig models are expected to accelerate. According to Jørgensen, drug and treatment testing of human diseases on transgenic pigs and other large-animal models may eventually be the world standard.