Doctors Grow Parkinsonian Human Brain Cells In Vitro, Shedding Light on the Genetics of the Disease

For the first time, Parkinson’s researchers have made human brain cells derived from the skin cells of patients who carry... 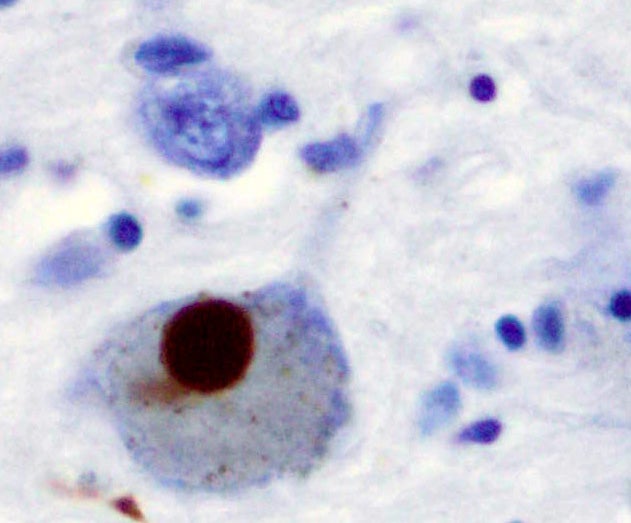 The brownish area is a Lewy body, an abnormal protein chunk that develops inside brain cells in Parkinson's disease. Wikipedia
SHARE

For the first time, Parkinson’s researchers have made human brain cells derived from the skin cells of patients who carry a mutated gene related to Parkinson’s disease. This means researchers can now track exactly how this mutation, in a gene called parkin, causes the disease in about 10 percent of Parkinson’s patients.

This is a major breakthrough because it will allow researchers to study brain cells affected by Parkinson’s in real time. Animals that do not have this gene cannot readily develop Parkinson’s-like symptoms, so researchers must use human neurons, but it’s generally difficult if not impossible to get live human brain cells to study.

Instead, Jian Feng and colleagues at the State University of New York-Buffalo took skin cells from four patients, including two healthy patients and two patients carrying the Parkin mutation. They induced the skin cells to become pluripotent stem cells, and then differentiated them into neurons — specifically, mid-brain neurons that create dopamine, called dopaminergic neurons. The loss of these neurons, which are the brain’s primary source of dopamine, causes Parkinson’s symptoms like loss of motor control.

The parkin gene indirectly harms those neurons. Here’s how it works: parkin regulates the production of an enzyme, monamine oxidase, which in turn keeps dopamine at bay. Parkin mutations do not control this MAO, and the MAO essentially runs amok, causing harm to the dopamine-producing neurons.

The Parkin gene mutation was present in the donors’ DNA, so the lab-created brain cells had the same traits that the patients’ real brain cells would have. This allowed the researchers to watch the gene mutation at work.

The neurons showed all the signs of MAO-related stress and a drop in dopamine uptake. But here’s the interesting part — when the researchers injected the normal version of Parkin, they could reverse the defects.

The paper was published Tuesday in Nature Communications.