Meet Spaun, The Most Complex Simulated Brain Ever

The computer program recognizes items, learns and remembers--and even passes some basic components of an IQ test. 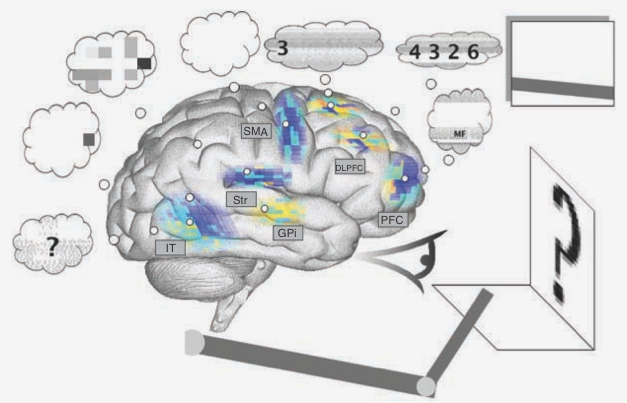 Chris Eliasmith has spent years trying to figure out the ingredients and precise recipe for building a brain. He even has a book coming out in February–called “How to Build A Brain”–describing gray matter, dendritic connections and other brainy anatomy. As he was writing it, it occurred to him that he might want to demonstrate it. So he built Spaun, the most complex simulation of a functioning brain built to date.

Spaun, which stands for Semantic Pointer Architecture Unified Network, is a computer model that can recognize numbers, remember them, figure out numeric sequences, and even write them down with a robotic arm. It’s a major leap in brain simulation, because it’s the first model that can actually emulate behaviors while also modeling the physiology that underlies them.

The program consists of 2.5 million simulated neurons organized into subsystems that are designed to resemble specific brain regions, including the prefrontal cortex, basil ganglia and thalamus. It has a virtual eye and a robotic arm, and can perform a series of tasks, each different from one another.

It’s different from other artificial brains like IBM’s Watson in that it’s designed to mimic behavior, not simply solve for function in the best possible way. Where IBM wants Watson to do one thing supremely well–search–Big Blue isn’t interested in how it’s done. Other IBM brain simulations, like the massive Blue Brain Project, can mimic brain spatial structure and connectivity–but they can’t mimic how this structure is tied to behavior, Eliasmith explained in an interview.

Eliasmith, at the University of Waterloo in Canada, operates the computer simulation on a supercomputer. Spaun is divided into two main structures, representing the cerebral cortex and the basal ganglia. The neurons are wired together in a physiologically realistic way, and they mimic what researchers think the basal ganglia and cortex are doing during certain tasks.

Imagine it sees a series of numbers, perhaps 1 2 3; 5 6 7; and 3 4 ?. Artificial neurons extract visual data, making sense of the patterns. Based on the visual information it receives, the program routes data to task-specific sections of the cortex, so it can perform a series of tasks. These involve testing memory, copying visual information, counting, and so on. It can even perform basic logic questions like the number-puzzle above, which are found on IQ tests.

Human brains are eminently capable at doing this, Eliasmith noted–people can sit and type at a computer, answer a question about a random fact, go make a sandwich, and then go drive a car, all in short sequence.

“This model is trying to address that issue of cognitive flexibility. How do we switch between tasks, how do we use the same components in our head to do all those different tasks?” he said.

Still, Spaun has its limits–it is relatively simple, compared to real neural networks, and it’s hard-wired, lacking the plasticity and adaptive capability human brains are known to possess. Eliasmith is working on updates that would allow it to learn new tasks and perceive instructions on a more complex level. He is even working on a program in which Spaun isn’t given explicit instructions, but rather positive or negative feedback. “We would just tell it if it is doing a good job or a bad job,” he said. “Eventually it would discover its own strategy for accomplishing its own task.”

In its ability to mimic the physiology and related behavior of the brain, Spaun serves higher purposes for both neuroscience and computer science, Eliasmith said.

“It lets us understand how the brain, the biological substrate, and behavior relate. That’s important for all sorts of health applications,” he said. He can kill off neurons systematically and watch how their deaths affect performance, simulating the process that happens as people age, for instance. Or, Spaun can help other machines emulate brain function more accurately and more efficiently, he said. “We can try to discover the algorithms being used by biology, and maybe understand the principles behind them, to build better artificial agents.”

The paper appears in the journal Science.