Scientists Send A Cloud Of Atoms Plunging Below Absolute Zero 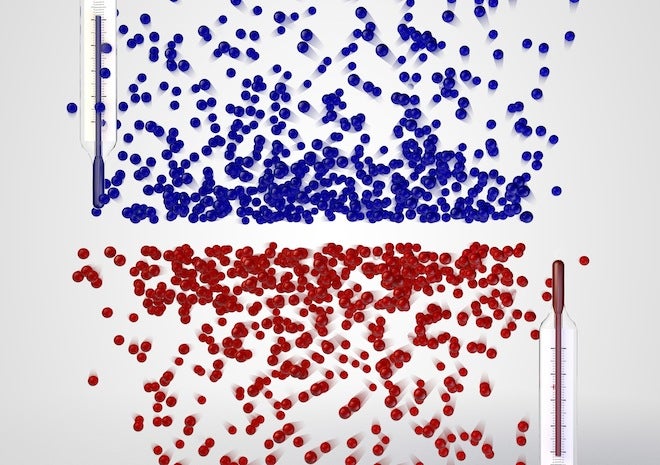 Absolute zero–that’s zero degrees Kelvin, or -459.67 degrees Fahrenheit–is understood by textbook definition to be the absolute coldest anything can be, a temperature threshold at which atoms actually lose all of their kinetic energy and stop moving completely (or at which entropy reaches its lowest value). There can be nothing stiller than completely still, and hence absolute zero is as low-energy as something can go. Right? But researchers have discovered that’s not exactly the case. By messing with the distribution of high- and low-energy atoms within a system, a team of physicists at the University of Munich in Germany has created what it defines as a negative temperature system–one that has a temperature south of absolute zero.

The researchers describe their system in terms of hills and valleys (picture this). At absolute zero, a group of atoms has no energy and is motionless, and thus all atoms are at the bottom of the valley. As the temperature rises above absolute zero that changes, but not all at once–some particles gain a lot of energy, and some gain just a little, so now the atoms have different energies and are spread along the slope of the hill, stretching from valley to hilltop. Physics says the most disordered state of this system occurs when there are an equal number of particles at every point along the slope, and that’s the top of the positive temperature scale–increase the energy any further and the particles would no longer be evenly spread, lowering the system’s entropy (for a more detailed description of all this, click through to New Scientist’s write-up).

The point is, you’re in the positive temperature scale when you have some number of high-energy particles atop the energy hill and some larger number of particles in the valley. So to reach their theoretical negative temperature scale the U. of Munich researchers forced that model to flip, placing more high-energy particles atop the hill than in the valley. Says New Scientist:

The resulting thermometer is mind-bending, with a scale that starts at zero, ramps up to plus infinity, then jumps to minus infinity before increasing through the negative numbers until it reaches negative absolute zero, which corresponds to all particles sitting at the top of the energy hill.

Suffice it to say that this isn’t something that tends to occur naturally on Earth. The researchers pushed their way into the negative temperature realm by placing atoms in a vacuum at just above absolute zero with most particles in the low-energy state and then used lasers to push the majority of them up the energy hill into higher-energy states. This inverse energy distribution is, on paper, a negative temperature system.

This is of interest not just because it seems we’ve drilled through temperature’s lower limit, but because negative temperature systems could assist physicists in experimenting with quantum interactions not possible in the positive temperature realm. And going negative is always interesting, especially if you’re into certain cosmological theories that posit that for every particle there is an anti-particle (a positive and a negative). For instance, there’s the universe we can see and then there’s the dark universe, whose dark energy is thought to apply negative pressure on the cosmos. Maybe that mysterious stuff exhibits negative temperature as well.