UCLA researchers discover brain damage that previously couldn’t be seen until after players died--a finding that could help save players' lives. 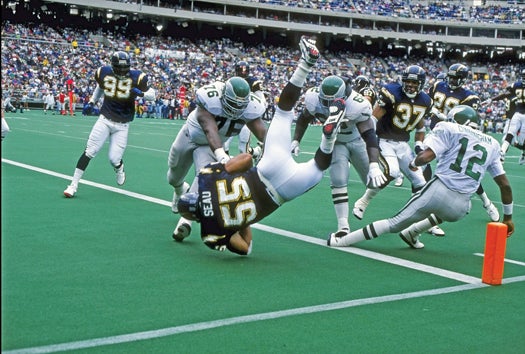 Junior Seau's suicide in 2012 heightened the controversy around head trauma in athletes. Colts receiver Austin Collie [above] received three game-ending concussions in 2010 before he was benched for the season. Doug Pensinger/Getty Images
SHARE

Researchers at UCLA have announced a major finding that could save the lives of football players and other contact-sports athletes who’ve suffered countless traumatic brain injuries.

In the war against head trauma in football, one of the most vexing problems has been how to identify and treat a condition known as Chronic Traumatic Encephalopathy. CTE is a form of brain damage that’s caused by multiple blows to the head and is believed to be the culprit in the high-profile suicides of former players such as Junior Seau, of the San Diego Chargers, and Dave Duerson, of the Chicago Bears. Until now, doctors haven’t been able to diagnose CTE in living people; they’ve had to dissect players’ brains postmortem to spot the telltale signs.

But the authors of a new study published in The American Journal of Geriatric Psychiatry claim they’ve been able to spot CTE in living players for the first time. The researchers used a special kind of PET (positron emission tomography) scan to spot signs of the disease in five former players whose ages ranged from 45 to 73, and who played five different positions: quarterback, linebacker, guard, defensive lineman, and center.

The brain images showed heavy deposits of a protein called tau, which accumulates along neural pathways that get damaged as a result of repetitive blows. As the tau builds up over time in a player’s brain, it essentially creates road blocks that prevent brain signals from traveling where they need to. The result is memory loss, lack of impulse control, aggression, and depression. And ultimately, doctors believe, those symptoms can lead a man to suicide.

The implications of the finding are big: Robert Cantu, an adviser to the NFL and co-director of the Center for the Study of Traumatic Encephelopathy at Boston University, called the finding a “Holy Grail.” Cantu’s lab has been at the forefront of CTE research thus far, but much of its work has been limited to studying brains donated by the families of deceased former players. One of the biggest frustrations for people in Cantu’s field has been the guesswork of diagnosis. That could all change if the UCLA study holds true. Being able to spot the disease before it’s too late could open up treatment options. If the disease were spotted in an active player, it could inform a decision about retiring. A negative screening for CTE could even be a prerequisite for playing a contact sport: If you have enough signs the disease, you’re out.

The UCLA researchers caution that their findings are based on an extremely small sample size–five players–and that further research will have to corroborate their work. In the meantime, another question lingers: How to mitigate the force of those hits in the first place and stop the brain damage before it starts.