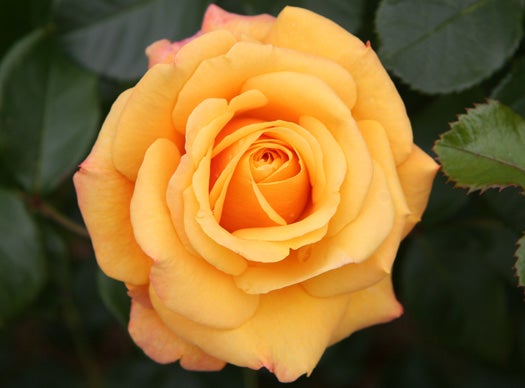 The makers of Deo Perfume Candy claim that if you eat a few of their pink lozenges, the odor compounds contained therein will travel through your body and start oozing out of your pores, giving you a vague and pleasant rose-smelling aura. That’s right. It’s edible deodorant. But don’t throw out your Speed Stick just yet. I tried it for a week, and suffice it to say “pleasant” is a wild overstatement.

First, how it’s supposed to work: The theoretical mechanism of action is pretty easy to grok if you know something about chemistry. The “active ingredient” in the candy is geraniol, a monoterpene alcohol found in rose oil, citronella and geraniums. It is used in perfumes and in artificial flavors such as raspberry, peach and lime. Those who read my BeerSci column will remember me talking about terpenes, as they pertain to hops and cannabis active ingredients. Well, geraniol is another terpene. If you look at geraniol, you’ll see that it’s mostly carbon and hydrogen; as such, it’s at least moderately fat-soluble, and thus it should pass easily through cell walls and therefore through your skin.

To test if this candy really does make one smell like roses, I agreed to 1.) eat them for a week and 2.) not use antiperspirant. I also refrained from using any perfume or scented lotions during the testing period. I did shower every day, though. My lucky (read: brave, foolish, insane) coworker Susannah agreed to smell-test me during the week.

Day 1
Test smell before the experiment. Susannah reports that I smell “normal” (whatever that might mean). The instructions that came with the candy say to eat four pieces of candy to get enough geraniol in your system. So I do. I don’t eat them all at once, but over the course of an hour. By the third candy, I am already dreading piece number four. It’s not that the candy tastes bad–it’s tart-sweet with a rose-raspberry character–but more that I don’t actually have a sweet tooth. After I pop the fourth candy, I wait for an hour or so, then demand to be smelled. It’s probably a mercy that Human Resources is on the other side of the building, otherwise I might have been answering some rather pointed questions about my shouting in the middle of a cube farm, “Susannah! Smell my rose-inflected funk!”

Day 2
Same as Day 1, except that I eat candies about once an hour, all day. Again, I have Susannah smell-test me before I shove the first candy into my piehole. By 3 p.m., I figure I’ve had enough geraniol-laced sugar to be stencherific. I stand up and present my arm for the smell test.

Day 3
I’m starting to really despise that bag of candy. I haven’t looked at a sweet with that much hate since the last time I got a Bit O’ Honey while trick-or-treating. In 1983. I dutifully eat more candy and make other people in the office smell me pretty much constantly. I start feeling nauseated due to general sugar overload, and I am pretty sure my pancreas is planning a bloody coup against my hands and my mouth. Susannah shakes her head sadly and reports that, no, I do not smell any different. She says, and I quote, that I “smell like a girl,” and that I’d been smelling like a girl since before the experiment. Needless to say, I do not smell like a rose.

After that, I give up.

Two, or even four, pieces of Deo candy aren’t bad. In fact, I actually like the flavor of it. The problem is that it just doesn’t work–at least it didn’t for me. If you already “smell like a girl,” the candy will not likely make much difference to your personal odor. Susannah, who, it should be noted, also smells like a girl, did a follow-up study of her own the following weekend, and came to the same conclusion. I would love to say I’d forgo the shower for a week on behalf of science, but I am pretty sure my colleagues would lock me in a closet. It’s one thing to “smell like a girl.” It’s something else entirely to smell like feet and onions, even with the vaguest hint of rose scent on top of it.

The candy, which is made in Bulgaria, is imported to the U.S. by Ecodeum LLC. You can buy it from Amazon.