BeerSci: What Running Marathons Can Teach You About Beer

Martha Harbison, a senior editor at Popular Science and former physical chemist, introduces a new column on the science of homebrewing. 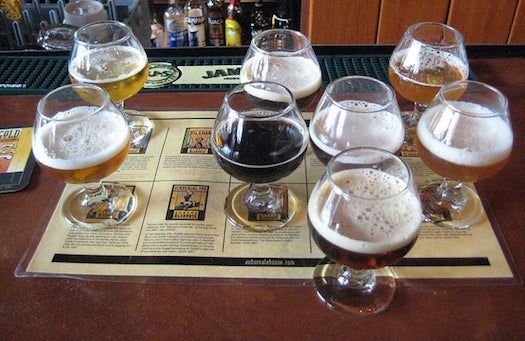 The United States has an estimated 1 million homebrewers, according to the American Homebrewers Association. That’s just slightly under the estimated number of nutjobs in the U.S. who have run a marathon. No word on what the Venn diagram of those two looks like, but I know that there’s at least one intersection between the two datasets because I live and brew with him: my spouse Doug. He and I have been homebrewing for a couple of years, and we’re about to get on a plane so Doug can run his second marathon.

Even though the two activities seem pretty unlike each other–the payoff for one is a 26.2-mile slog while people scream at you; the payoff for the other is being able to sit in front of the TV in your underwear while you scream at people–they have similarities. Both can be intimidating and incomprehensible to the uninitiated. (You want me to run how far? What the hell is trub, and why should I care?) Both require planning, time, and a hefty investment in equipment. And both can sometimes make you want to cry. (If you’ve ever done a 22-mile training run in the middle of July or infected a batch of beer such that the finished product smelled like fruity paint thinner, you know what I mean.) But, ultimately, both bring a sense of accomplishment: “Hey, I just ran 15 miles at 7m30s per” has the same sweet ring as, “Hey, my IPA tastes better than most of the ones I can buy at the store.”

The reason for this PopSci.com column is twofold. First, I want to help demystify and exalt beer. There has never been a better time to be a beer fanatic. But there’s also a lot of B.S. out there–confusing terms, newfangled names and styles, and some truly regrettable beers. I have personally brewed at least one myself.

Second, I want to sweet-talk more intrepid souls into trying homebrewing for themselves. I’ll be posting about beer, because that’s what I like to drink, but once you have the basics, you can ferment whatever you want to: honey, fruit juice, the squeezings of twigs and berries. As long as there’s fermentable sugars in the mix, Saccharomyces will turn them into ethanol and carbon dioxide. I’ll post recipes and pictures (sometimes of my cats) and, occasionally, interviews with people I can cajole into talking to me on the phone. I’ll talk grains. I’ll talk hops: varietals and alpha-acid isomerization and the crazy experimental stuff they’re growing in Oregon. And I will, of course, talk about the science of brewing. I may or may not be drinking a homebrew when I do all of this. Hopefully, by the sixth or seventh week, some of you will be drinking your own homebrew while reading it. I’ll leave the running advice to someone else.

Next week: a recipe for Marathon Ale