Pour out some dandelion wine 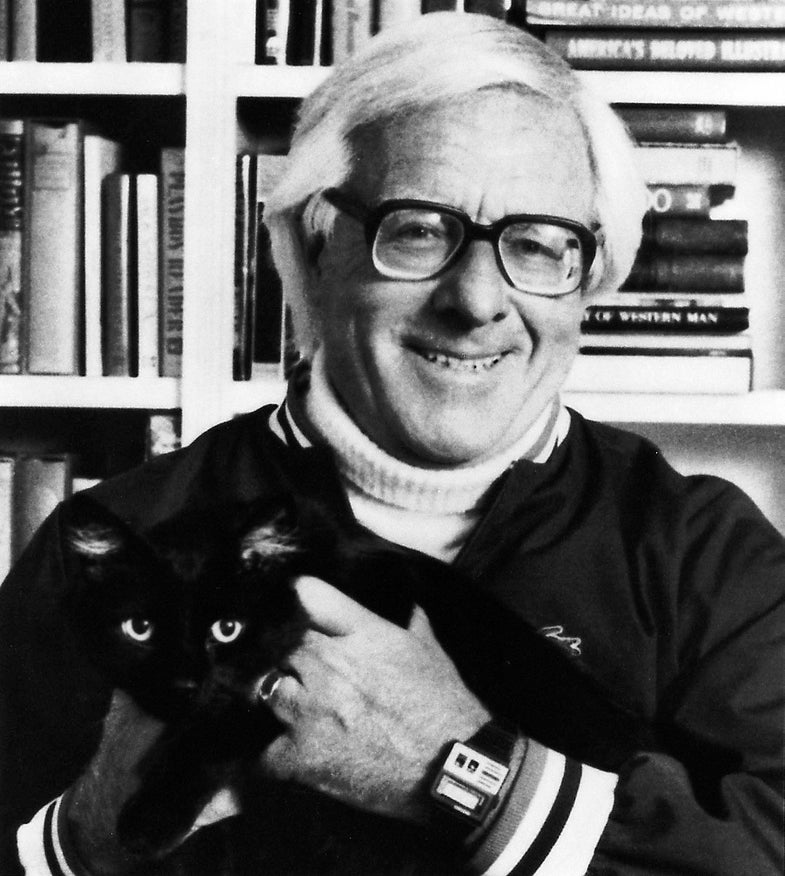 Web editor Paul Adams ruined my morning by walking over to my desk to inform me that Ray Bradbury had died at age 91. The news was unpleasant, but I appreciated the face-to-face exchange rather than getting an email. Bradbury, a writer oft-gripped by the talons of nostalgia who disliked modern technology such as computers, deserved a meatspace delivery of the news of his demise.

Bradbury’s work was some of the first speculative fiction that I ever read, years before I was mature enough to really appreciate just how humanistic his writing was. Back then, it was “holy crap, ghost people on Mars!” or “holy crap, carnivals are creepy” or “HOLY SHIT, they burned books!” But going back and reading some of his work as an adult brought a better understanding of his dedication to depicting the fervor of young friendships, or the profound melancholy of the alienated adult. It also brought to focus Bradbury’s understandable, if somewhat grating, nostalgic tendencies. One story in his 1953 collection Golden Apples of the Sun (or it might be from the 1962 R Is for Rocket collection—I have those two as an omnibus) laments that modern technology, including a dinner that screams to be taken out of the oven lest it burn, would eventually terrorize an increasingly frazzled human population. While I agree with him that certain modern contrivances can be a giant pain in the ass (put the smartphone down and have a conversation with my face, please), I just can’t get on board with looking wistfully into the past, which is probably why I have worked at PopSci for as long as I have.

One of the frequent complaints that I hear about Bradbury is “I had to read Fahrenheit 451 for school, and it sucked.” Of course it sucked: Who enjoys being forced to read a book and write a paper on it? (You know which other books “sucked” in high school? The Grapes of Wrath. Heart of Darkness. I Know Why the Caged Bird Sings.) But I encourage those who hated Fahrenheit 451 to pick it up again as an adult. (You might want to revisit the other books I just mentioned as well.) Fahrenheit 451 has its flaws, including a particularly strong streak of neo-Luddism, but it’s worthwhile to try to get past all that to see why so many English teachers assign it as class reading.

Although Bradbury’s most generally well-known book was a novel, he was a much more accomplished short-story writer, and if I were to suggest to someone where to start in his published oeuvre, I’d start there. I’d suggest beginning with the collection The Illustrated Man. It has some great stories therein, and while they are somewhat thematically linked, the structure is not as rigid as The Martian Chronicles, which is pretty much all about the hypothetical human colonization of Mars.

RIP, Mr. Bradbury. You were a talented writer whose obsessions divided readers, but you always knew how to spin a good yarn.