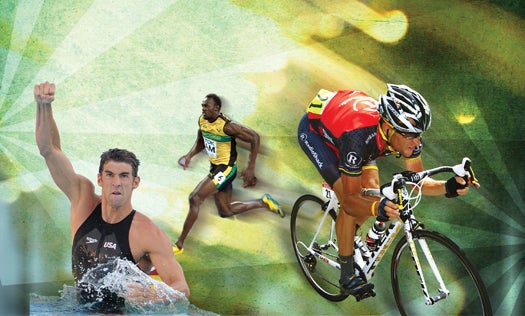 Even if athletes never got any stronger or faster, and if their techniques and training never changed, they would still break records from time to time. That’s because the ability of each person who decides to compete, and the outcome of each competition, are affected by random processes. What happened on the way to the track that might affect the athletes’ performance? What’s the weather like? And so on. Every sporting event is a matter of chance as well as of achievement, and chance always offers the possibility of a breakthrough.

That said, the mathematics of record-breaking—also known as “extreme-value statistics”—tell us that, all things being equal, the frequency of world records will tend to diminish. At a certain point, we’ll have rolled the dice so many times that the chance of our beating our best score drops close to zero. That’s why new sports and new classes of competitors typically produce more records than old ones. Women athletes weren’t allowed to compete in the Olympic marathon until 1984. Since then, their record time has dropped by about 10 minutes, while the men have managed to shave off only five.

All things are not equal, of course: Athletes are much better conditioned than they were in the first modern Olympics, held in 1896. Many competitors are now professionals instead of amateurs, they’ve developed new techniques (high jumpers used to go over the bar face down; now they flop over backwards), and they have new equipment. Each of these developments accelerated the pace of record-breaking, and any projections for the future must take further innovation into account.

(Extreme-value statistics can also be useful for spotting patterns outside of sports. For instance, researchers have tried to apply record-breaking calculations to the study of climate change, to figure out the likelihood for any given day to be the “hottest on record” as the atmosphere heats up.)

pullquote: “The mathematics of record-breaking tell us that, all things being equal, the frequency of world records will tend to diminish.”Athletes tend to blow records wide open only during periods of major innovation. The rest of the time the gains are incremental, or nonexistent. Research by Alan Nevill, a biostatistician at the University of Wolverhampton in England, shows that world records tend to accumulate slowly at first and then go through a period of rapid acceleration as new technologies are adopted and more people compete. Once this period of innovation ends, the record-breaking curve flattens out.

Some sports have multiple periods of acceleration. The design of bicycles dramatically affects cyclists’ performance; the introduction of carbon fiber helped riders to break multiple records. Anabolic steroids may have contributed to recent firsts in some track events, and new swimwear fabrics reduce drag in the water, helping swimmers set new standards in the sport.

It’s possible, though, that the pace of innovation in Olympic sports—in terms of both technique and technology—is slowing down. In 2008, Paris-based researcher Geoffroy Berthelot looked at more than 3,000 world records from 147 sporting events in the Olympics, going all the way back to 1896. When he plotted the records over time, he found an exponentially decaying rate—”a major global fading of [world-record] progression,” as he put it. Two thirds of track-and-field events have stagnated since the early 1990s, and the rate has also slowed for other individual sports. “You see it now,” he says—athletes may be approaching their biomechanical limits at last.

Ask Us Anything
Sports