Preserved in Antarctica since 1907, the Scotch that Ernest Shackleton drank is now available in stores 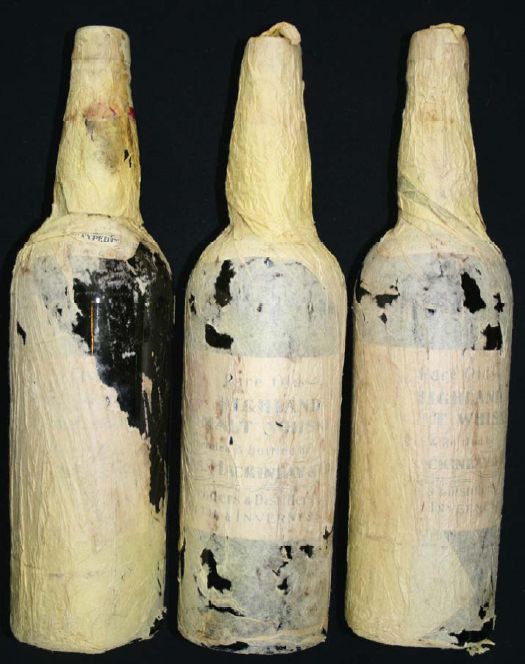 In 1907, Ernest Shackleton and crew set out on the ship Nimrod to visit Antarctica and, they hoped, the South Pole. The good news was, the entire party survived the trip, thanks in part to the Rare Old Highland Whisky they brought to the frozen continent. But the expedition was forced to evacuate in 1909, some 100 miles short of the Pole they sought. And, as winter ice encroached and the men hurried home, they left behind three cases of the choice whisky.

In 2007, just about a century later, the whisky was found, intact, at the expedition’s hut at Cape Royds in Antarctica.

The stuff was made by Mackinlay & Co at the Glen Mhor distillery in 1896 or thereabouts. Mackinlay hasn’t been an active brand for a while now, but the current owner of the Mackinlay name, Whyte and Mackay, obtained a few of the precious bottles and set out to do what any right-thinking Scot would do: first, taste the whisky; and second, attempt to analyze and re-create it. The result, a product called Mackinlay’s Rare Old Highland Malt Whisky, is, as of this writing, buyable in stores.

How was the re-creation carried out? Dr. James Pryde, chief chemist at Whyte and Mackay, subjected the samples to a comprehensive chemical analysis, in conjunction with a rigorous sensory analysis (that is, sniffing and tasting). Firstly, it was established that the alcoholic strength of the whisky was high enough that it very likely never froze over the years it spent interred in Antarctica. In winter, the hut reached a minimum temperature of -32.5°C, but, at 47 percent alcohol, the whisky remained liquid down to a couple of degrees cooler than that extreme. This eliminated what had been a significant source of concern about the quality of the sample, that decades of freezing and thawing had altered or ruined it. Carbon dating verified that the whisky did indeed date from the Shackleton era. 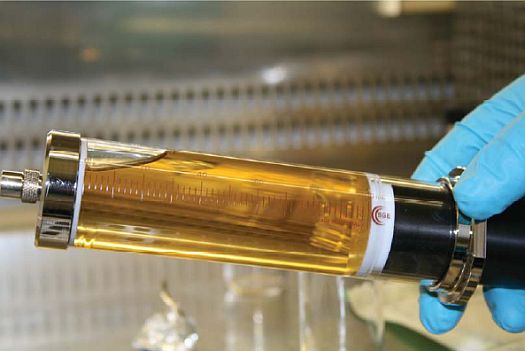 Instead of pulling the corks, the scientists drew whisky from the bottles through a sterile needle.

Phenol and related phenolic compounds show up in Scotch whiskies, giving them the unmistakable character that’s referred to “peaty,” because the flavor is introduced when the grain is exposed to peat smoke during the malting process. Chemical analysis revealed not only the quantity of phenolics in the Mackinlay — surprisingly low, given that era’s reputation for heavily peated malts — but also the particular balance of compounds, which enabled the experts to pinpoint what region the peat used had likely come from. The answer? Orkney.

Similarly, analysis of the compounds that result from barrel-aging was able to finger the barrels in which the whisky was aged as ones made from American oak and probably used once before to age wine or sherry. Gas chromatograph olfactometry, in which the spirit is broken down into its volatile components and each of these smelled individually by experts, gave clues as to details of the fermentation and distilling process. The analysts write:

Other aromas detected by olfactometry and related to lactic acid bacterial growth were a stale solvent aroma of ethyl 2-butenoate, and sweet/ peaches, sweet/peaches/coriander leaf aroma at retention times of 15.4, 38.71 and 39.41 min respectively; the latter retention indices and descriptors agreeing with those published for γ- and δ-dodecalactones.

Armed with all this detail, Whyte and Mackay’s master distiller, Richard Paterson, was able to delve into the wealth of warehoused casks and, with the help of his prodigious nose, blend a number of whiskies in exact proportions to replicate the Shackleton spirit. The re-creation, which is given a stint in sherry casks before bottling, includes some of the remaining whisky from the Glen Mhor distillery, which was demolished in 1986, supplemented with comparable liquor from nearby Dalmore. Benriach, Glenfarclas, and other Speyside whiskies lend their character, along with Balblair, Pulteney, and Jura. 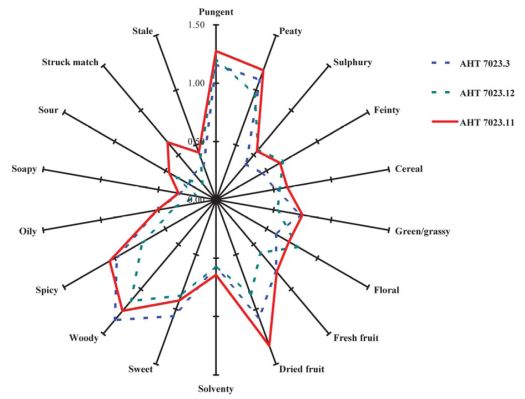 The characteristics of the three sample bottles were mapped thusly.

The resulting blend was subjected to the same battery of chemical analysis as the original, and found to stack up quite comparably, their phenolics and esters finely matched.

Finally, minus the milliliters of whisky that had been carefully syringed out through their corks, the original bottles were returned from Scotland to the Shackleton expedition’s hut, where they have been re-situated as part of the preserved environ by the Antarctic Heritage Trust.

For the complete details of the analysis of the Mackinlay whisky, a copy of the paper published by Dr. Pryde et al in the Journal of the Institute of Brewing is available here.