Gray Matter: In Which I Dip My Finger In Molten Lead

The true test of trust in science 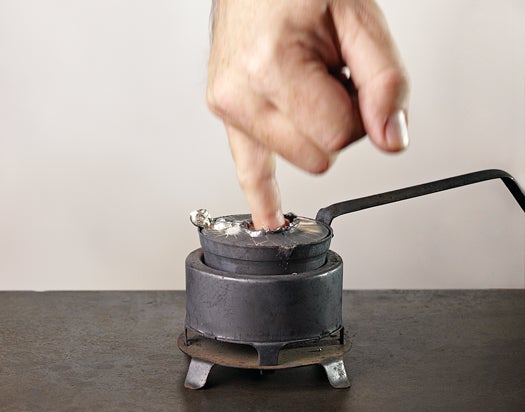 Last year, I stuck my hand in super-cold liquid nitrogen for the amusement of PopSci readers. My skin survived that demonstration, but I wimped out on a related experiment at the opposite extreme: dipping my finger into molten lead. That’s because the only time I’ve ever burned myself badly enough to need a doctor was while casting a lead plaque as a kid.

But life is too short to cower in the dark, afraid of a little molten metal. I knew that the antidote to my fear was science; I trusted the Leidenfrost effect to keep me safe. When my finger hits molten lead that’s hot enough, moisture from my finger should be vaporized instantly, creating an insulating layer of steam that should protect me for a fraction of a second. (This is a mirror image of what happened when I put my hand in liquid nitrogen, where the heat from my hand was hot enough to instantly vaporize the nitrogen, similarly creating an insulating layer of gas.)

The “hot enough” part is key. If the metal is just barely molten, not enough steam is created, and some of the lead may solidify onto the finger, where it would rapidly transfer enough heat to cause a serious burn. So I had to get the temperature well beyond that level, test the metal with a hot dog, and then go for it.

In place of lead, I used nontoxic plumbing solder, which has a melting point of around 400°F. When the temperature got up to 500°, I inserted my pinkie finger—and didn’t feel a thing. I managed to come away unscathed even though my finger was in the liquid past the knuckle long enough for me to splash around a bit. OK, according to the high-speed video we shot, it was only about one sixth of a second, but it was long enough to cure my childhood fear of molten lead for good.

The full demonstration—lasting a fraction of a second—in photos.

An earlier demonstration of the Leidenfrost effect shows the author’s entire hand in –320° liquid nitrogen. For further details click here