I Defend My Backyard With A Bottle Bazooka 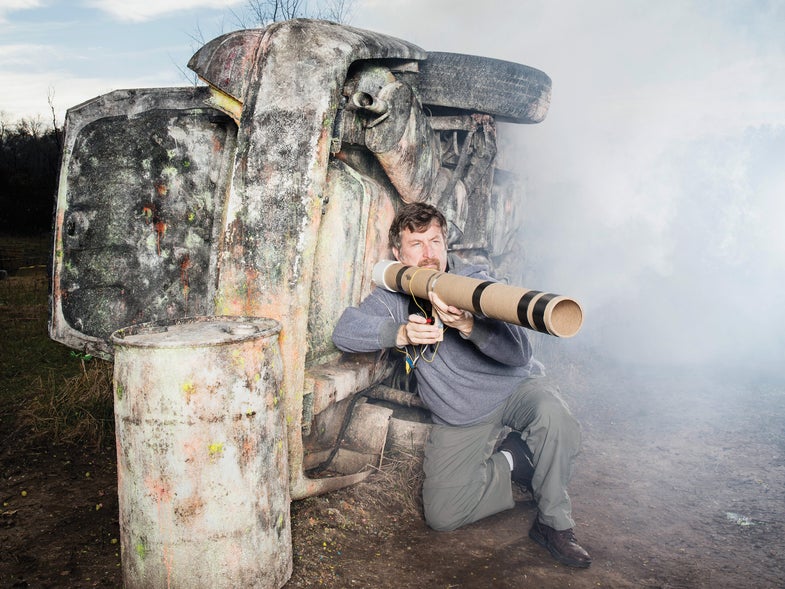 I’ve always wanted my own bazooka, but my neighbors might not look upon that too favorably. So instead, I satisfied my craving with a bazookalike contraption capable of launching plastic bottles clear across my backyard. While it might not be quite on the level of a U.S. Army M72 rocket launcher, my beverage-bottle bazooka sure does shoot with authority.

The original bazooka was developed to stop tanks during the early stages of World War II. In late 1940, the military had created a new type of grenade that focused its blast into a narrow point of energy capable of penetrating tank armor. But it had a relatively short range. So 2nd Lt. Edward Uhl decided to build a device to keep foot soldiers away from the tanks they were targeting.

After a bit of noodling, Uhl attached a dummy grenade to a rocket and put the rocket in a portable launch tube. The first tests of his device took place on a dock on the Potomac River, where the projectile flew straight and far into the channel. Later, at a mortar shoot-off at the Aberdeen Proving Ground in northern Maryland, Uhl scored a direct hit. A brigadier general nicknamed this rocket-launching gadget a bazooka, after the stovepipelike musical instrument used by a radio comedian at the time.

My design for a bazooka looks a lot like the real McCoy. For the barrel, I used a 3-inch-diameter heavy paper tube I found at a local packaging store. My projectile is an uncapped plastic beverage bottle, filled with a mixture of air and evaporated alcohol. I position it in the tube so that the bazooka’s trigger—a modified grill igniter—fits inside the bottle. When a spark sets off the alcohol, it forms a hot gas that gushes out of the bottle’s mouth, propelling the plastic out of the tube. My bottle bazooka sports a distinctive and tough look. Even better, it packs a heckuva wallop.

This article was originally published in the January/February 2016 issue of Popular Science. Correction: An earlier version of this article incorrectly stated that the Potomac River is near the Aberdeen Proving Ground.

How to Build Your Own Bottle Bazooka

This project is easy to complete and a real thrill to use. It is made from inexpensive materials such as cardboard tubes and beverage containers.

Test the device by pressing the button on the piezo-electric ignitor. If you’ve done everything correctly, you should see a spark jump between the two exposed conductors. If you don’t see a spark, check the spark gap, review the assembly diagram, and rewire as needed. 8. Use the hose clamps to attach the piezo-electric trigger to the bazooka body.

How to Use the Bottle Bazooka

Before Starting, Take These Safety Measures: