How I Transformed Sewage Into Fresh Water [Video] 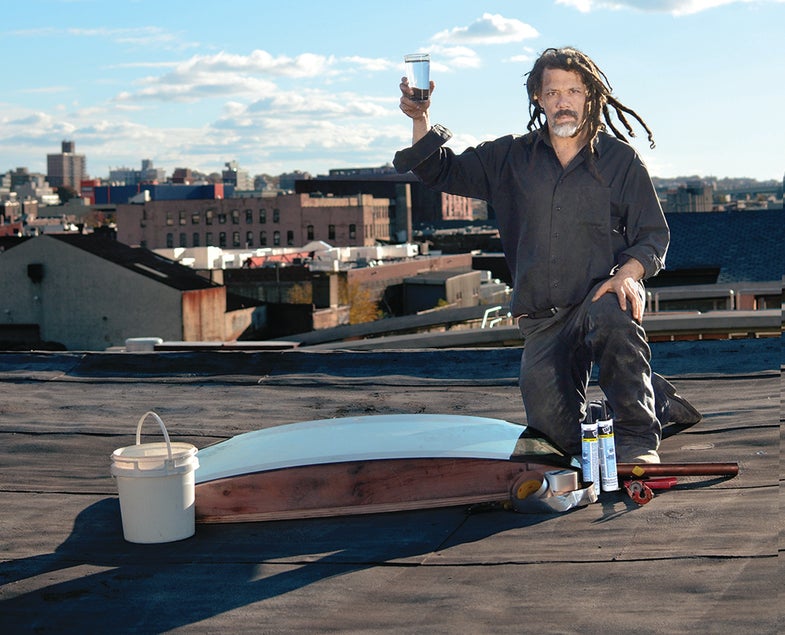 Say the apocalypse happens tomorrow. The good news: You survive! No more credit card debt or miserable commutes. The bad news? Infrastructure has collapsed and there’s no clean drinking water. Most people can’t last a few days without it, so what we need is a reliable way to purify some from toxic soup.

Distillation covers nearly all bases, freeing H2O of salts, pollutants, microbes, viruses, and other nasties. A common method is moonshine-style, using sealed pots, fire, and complex plumbing. Or it can be done more safely and lazily by harnessing the sun.

Solar stills elegantly miniaturize the cycle that draws water from oceans and lakes, stores it in clouds, and returns it to Earth as rain. I made the one below using caulk and tools from my workshop, plus a windshield, wooden pallets, duct tape, and simple plumbing I salvaged from a nearby Dumpster.

Suspect water goes into a shallow box; the sun shines through the windshield and evaporates the water—leaving behind a stew of contaminants. When the vapor hits the cooler windshield, it condenses back into liquid, trickles into a gutter, and drips into a bucket.

How much did I trust this theory and pile of garbage to purify water? To the death—or at least crippling diarrhea. I started with a filthy sample pulled from the Gowanus Canal, a Superfund cleanup site. An average cupful contains heavy metals, hydrocarbons, and pathogens.

What emerged from the still hours later was clean, clear, and drinkable—no trip to the emergency room required.

Instructions:
Build your still by following these instructions closely, and then use different parts as needed—the list isn’t strict. Most substitutions should work as long as you honor the essence of what each part needs to do. The glass should allow sunlight to enter and water to condense, so a windowpane or a coffee-table top could suffice. The body, meanwhile, needs to be watertight; for example, a stainless-steel sink might work.

Materials:
• Windshield (cracks are okay, holes are not)
• ½-inch-thick plywood scrap (larger than the windshield)
• Two hardwood pallets
• A dozen 1-inch-long wood screws
• Wood glue
• Silicone caulk (black will hold the heat and extend the evaporation period)
• Copper pipe, ½- to 1-inch diameter (at least a couple of inches longer than the windshield is wide)
• About 5 feet of garden hose
• Faucet (you need its valve, not aesthetic qualities; a ball valve could work, too)
• Aluminum foil–lined duct tape (the kind actually used in duct repair, although regular duct tape will work if it’s rated to withstand direct sunlight and temperatures of 160°F)

Steps:
1. Outline. Trace the windshield’s shape on the plywood, and saw it out.

Set the still in the most direct sunlight possible. Open the faucet and pour in suspect water until it’s a couple of inches deep, then close it back up. The still should be slightly inclined, with the gutter at the lower end to move condensation toward it. (An extra pallet slat or two should be enough to prop up the end with the faucet.)

After a half hour or so—more if it’s a cold day or the sun isn’t too bright—water will visibly condense and run down the glass, drip into the gutter, and into the collection vessel. Discard the first few ounces of water. This is especially important if your source was contaminated with lighter-than-water volatiles, such as gasoline and acetone, because these will come off first.

Leave the still out all day. It should continue to work after sunlight fades, as the stored heat does the last bits of work. Then bask in the fact that the most basic of human needs has been mastered.

WARNING: Solar stills can’t remove all organic solvents, and improper use can introduce contaminants. If you build and drink from one—including this version—you do so entirely at your own risk. (Consider waiting until after the apocalypse to take a swig.)