Gray Matter: In Which I Fully Submerge My Hand in Liquid Nitrogen [Video]

A layer of bubbles protects the flesh from liquid nitrogen, though only for a split second. Need proof? Look no further. 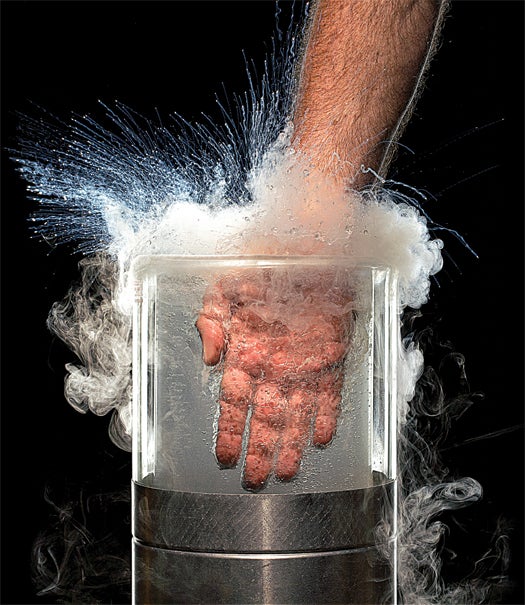 My hand is like a red-hot poker to the liquid nitrogen, but an insulating layer of nitrogen gas forms- a phenomenon known as the Leiden-frost effect- keeping my hand safe and warm for a fraction of a second. Mike Walker
SHARE

When I first saw this photograph of a man’s hand submerged in liquid nitrogen at somewhere below -320° F, my immediate thought was, “That guy must be crazy! One second in that stuff, and you’re shopping for new skin!” My shock was tempered only slightly by the fact that it was my hand, and we’d taken the picture just a minute earlier.

I hadn’t realized that my hand was quite so deep into the liquid. Amazingly, I barely felt the cold at all. My skin didn’t get hurt for the same reason that water droplets dance on a hot skillet. An insulating layer of steam forms almost instantly between the water and the metal, keeping the droplets relatively cool as they float for several seconds without actually touching the hot surface. To liquid nitrogen, flesh is like that skillet—a surface hundreds of degrees above its boiling point. So the moment my hand touched the liquid, it created a protective layer of evaporated nitrogen gas, just as the skillet created a layer of steam. That gave me just enough time to put my hand in and pull it out again. Any longer than that, and frostbite would have set in. 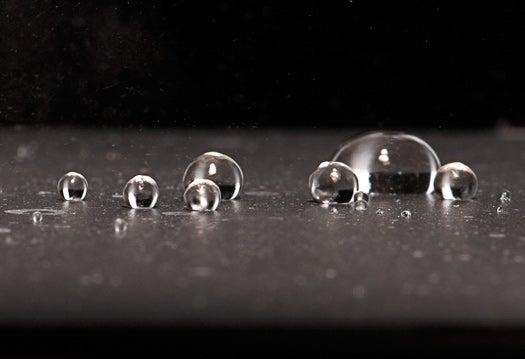 Droplets on a very hot skillet take longer to evaporate than they would on a less-hot surface where no insulating gas layer forms.

The phenomenon is called the Leidenfrost effect (after Johann Gottlob Leidenfrost, the doctor who first studied it in 1756). I’d known about it for years, but when it came time to test it in real life, I have to admit that I used my left hand, the one I’d miss less.

I drew the line at another classic example of the effect. According to the books, it’s possible to stick a damp finger directly into molten lead without getting burned, if you do it fast enough. After some consideration, and remembering the times I’ve been burned by molten lead, I decided that it probably wouldn’t make a very good picture anyway.

ACHTUNG! Do not try this. If liquid nitrogen soaks into your clothes, you will not be protected by the Leidenfrost effect, and you can get frostbite very quickly.