Algae Could Be Key to Cleaning Up Nuclear Accident Sites

Algae can secrete biofuels and pump out biologic drugs, and now researchers think it could help clean up radioactive accidents... 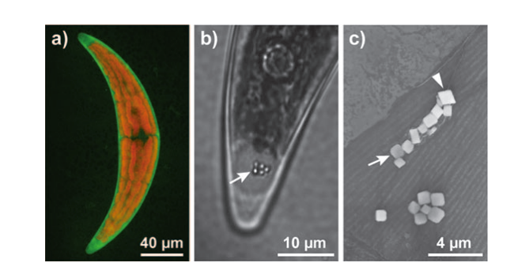 Algae can secrete biofuels and pump out biologic drugs, and now researchers think it could help clean up radioactive accidents like the one unfolding at Japan’s Fukushima nuclear facility. A Northwestern University researcher has identified a certain kind of common algae, known as Closterium moniliferum, that has a unique penchant for sequestering strontium into crystals, a trick that could help remove the dangerous radioactive isotope strontium-90 from the environment.

Strontium-90 is particularly hazardous because of its similarity to calcium. Because the two atoms share similar atomic properties, radioactive strontium can end up getting into the same places calcium can, like milk, bones, bone marrow, and blood. But strontium-90 isn’t a dominant element in reactor waste–there is usually billions of times more harmless calcium than strontium in a nuclear spill–so being able to separate the two is critical for quick and efficient cleanup.

That’s where C. moniliferum comes in. The algae’s real interest is barium, but because a strontium atom is somewhere between calcium and barium in properties and size the algae happily vacuums up and crystallizes the strontium as well. But critically, it leaves calcium behind, meaning cleanup efforts don’t end up sequestering a bunch of harmless calcium along with the dangerous strontium. And because the algae are really hunting for barium, the researchers think it’s possible to seed a radioactive site with a small amount of barium to accelerate the entire process.

That saves both time and money, and in the midst of a massive disaster cleanup effort like the ongoing one in Japan, both time and money are extremely valuable. For their part, the algae waste little of either–they are easy to culture and begin to precipitate crystals of strontium within a half hour of contact. Strafe a stricken nuclear site with the tiny organisms, and you could have them hunting and sequestering strontium in a matter of minutes.