Gull-Wing Firefighting ATV Could Operate in the Middle of Inferno 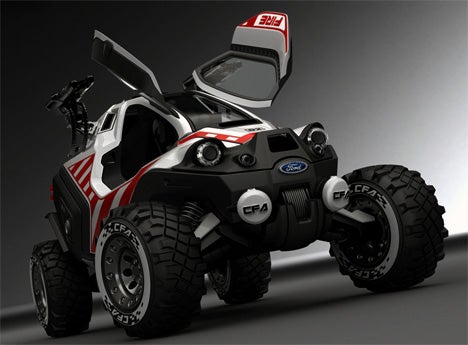 Get ready for a firefighting vehicle that might have arrived from your old Saturday morning GI Joe cartoons. Yanko has showcased an ATV design by Liam Ferguson that can carry remotely-operated water cannons and a two-person crew into the heart of a raging blaze, and emerge unscathed.

Firefighters currently rely on modified Toyota Landcruisers or other utility vehicles for doing recon on hotspots. Those work well in a pinch for navigating rough terrain, but carry only a meager water supply of 500 liters and cannot survive a burnover when flames suddenly sweep over the area.

The proposed Amatoya vehicle would use aerogel laminated insulation for its windows and body, and a temperature-controlled spray down system which draws on an auxiliary water tank specifically dedicated to that purpose. Military-grade thermo ceramic paint would swell upon heat exposure and add some sacrificial protection. 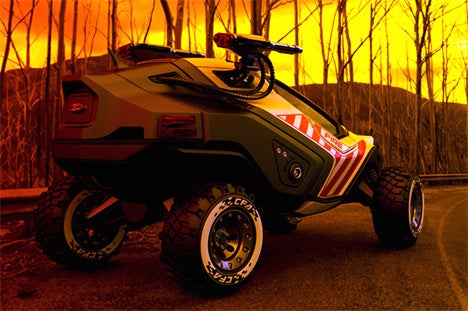 Point me toward the blaze

Driver and cannon operator would have central, forward and high seats, not unlike the cabin of an Apache assault helicopter. The cannon operator could control twin cannons that aim at hotspots detected by a thermal imaging camera and directional spotlights.

Amatoya also holds its own 1,800-liter water supply, as well as the 400-liter auxiliary water tank. Unlike current recon vehicles that can become prone to rollovers due to top-heavy water loads, Amatoya’s design would position the water tanks central and low within the vehicle.

The vehicle design by Liam Ferguson includes four-wheel drive and plenty of suspension and ground clearance to deal with fire-broken terrain. Central tire inflation and run-flat tire technology would ensure that the vehicle does not get stuck in a dangerous location.

Tiny recon bots, aerial drones and massive supertankers have all surfaced recently as relatively new firefighting tools. But the Amatoya concept might outshine all of them just based on looks — although there’s no word on cost.