It’s About Time: A Power Line That Sheds Heavy Ice

Tired of Jack Frost knocking out your power? Victor Petrenko, an engineering professor at Dartmouth College, has developed de-icing technology... 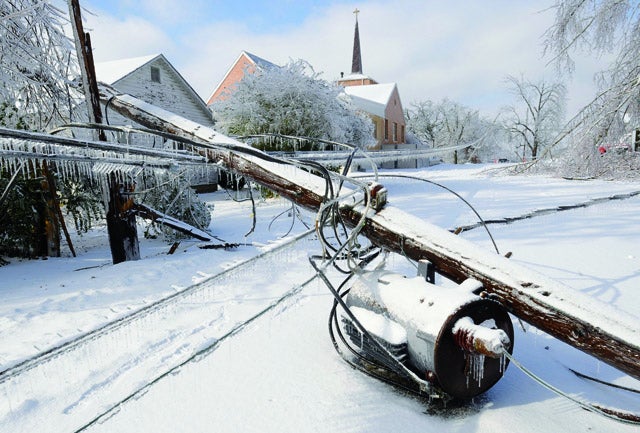 Tired of Jack Frost knocking out your power? Victor Petrenko, an engineering professor at Dartmouth College, has developed de-icing technology that could save power lines from ice storms.

Until now, the only answer to frozen lines has been to hope that they don’t break or pull down poles under the weight of the ice. A single ice storm in early December left more than 1.25 million people in Pennsylvania, New England and New York shivering in the dark after ice storms snapped power lines.

Petrenko’s trick is to increase the electrical resistance in cables, something engineers usually avoid because it causes lines to lose energy as heat. Attached to each end of a line, his device switches the wires inside from a standard parallel layout to a series circuit. In normal conditions, the cable works like a standard power line, but flipping the line to series increases resistance, and the wires generate enough heat to shed the ice. The process takes 30 seconds to three minutes and saps less than 1 percent of the electricity running through the lines. Utility companies could switch the lines remotely, and Petrenko says swapping in his cables would cost less than repairing ice damage.

This summer he tested the technology between two transmission towers near Orenburg, Russia; China is considering the device to protect its $170-billion investment in expanding its energy grid. This fall, Petrenko will test a modified version of the tech on an Audi A8 that he expects will de-ice its windshield in two to four seconds. Later, he’ll apply the tech to airplane wings, which could reduce delays and crashes. “A plane that could shed ice in seconds,” he says, “would be a much safer way to fly.”