Bad Bottles of Wine Can Be Used for Energy

A bad bottle can throw a wrench in your dinner party, but researchers in the U.S. and India say it... 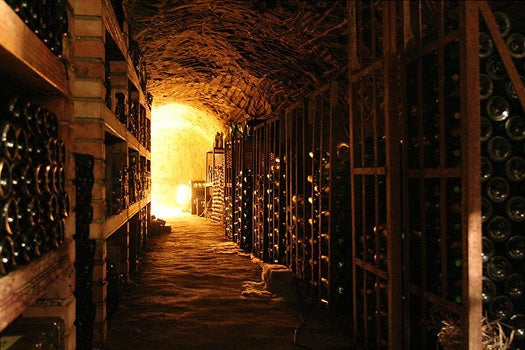 Not to worry, researchers can still salvage some electricity from a vintage that's going bad. Jairo
SHARE

A bad bottle can throw a wrench in your dinner party, but researchers in the U.S. and India say it could also lower your energy bills. Using the leftover vinegar and sugar in improperly fermented wine, those scientists are devising novel methods to turn wastewater from vineyards into electricity and hydrogen, cleaning the water in the process.

It takes a good deal of water to process grapes into the fermented sugars that give wine that lovely, drowse-inducing quality. The wastewater coming out of vineyards is packed with unfermented sugars, biomass, and improperly fermented vinegar. Generally, all that wastewater has to be cleaned, and that can be costly; something like 1.5 percent of American electricity goes toward wastewater treatment, and up to five percent goes toward other water management systems.

So Penn State researchers are using microbes to convert those waste products into energy rather than dumping them into an energy-wasting treatment cycle. Using widely-available bugs, a fridge-sized microbial electrolysis cell converts the wastewater to power by first converting the sugar and vinegar into electricity and then using that electricity to split the water molecules into hydrogen and oxygen, which slip harmlessly back into the atmosphere.

A much larger unit would be needed to clean the wastewater of an entire winery, but the proof-of-concept electrolysis cell seems to be a viable way to clean a winery’s wastewater without pulling tons of power off the grid. Later iterations of the device could trap the hydrogen and methane produced in the process, burning methane for heat or using the hydrogen to power a fuel cell.

But while the Penn State team is saving energy at wineries, a group in India is working on a means to generate power by intentionally spoiling wine. Using two different bacteria that render a vintage undrinkable, they’ve designed a fuel cell that allows one bacteria to break the sugar into acetic acid and the other bacteria to convert that acetic acid into electricity.

While we don’t necessarily like the idea of spoiling a perfectly good pinot just to generate a few milliwatts, the fuel cell could take generate power from wine that doesn’t make the vintner’s cut — that is, wine that would usually be wasted. That power could eventually treat wastewater or power day-to-day operations without the use of hydrocarbon-based energy. We’ll raise a glass to that.