Server farms are undeniably awesome in that they store huge pools of data, enable such modern phenomena as cloud computing... 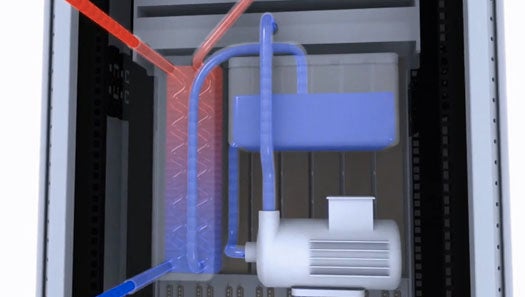 Server farms are undeniably awesome in that they store huge pools of data, enable such modern phenomena as cloud computing and Web-hosted email, and most importantly, make the Internet as it stands today possible. The downside: data centers get very, very hot. Cooling huge banks of servers doesn’t just cost a lot, it eats up a lot of energy, and that generally means fossil fuels. UK-based Iceotope hopes to cut those costs by about 93 percent by wrapping servers in liquid coolant. 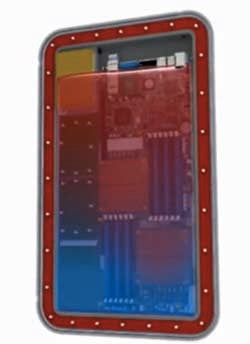 Bags of liquid coolant are placed inside the server banks at the component level, pulling heat away from the guts of the data center without the use of costly air chillers.

Iceotope works by wrapping individual components inside each server in a kind of ice-pack filled with synthetic coolant. The system also employs water to carry excess heat out of the data center, either releasing it into the atmosphere or channeling it to offices or other areas as a form of heating during cold weather. Iceotope claims the system eliminates the need for chillers or CRAC units, as the water does all the work, carrying the heat away from where it can do damage.

Though not the first attempt at liquid server cooling, Iceotope’s approach is unique. Supercomputers designed by IBM use water to ferry waste heat away, and other liquid-cooled cabinets cool the frame and rack assembly with liquid but air-cool the electronics. Iceotope’s technology brings coolant to the very center of server cores, wrapping individual components in cooling packs for increased efficiency. The ease of integration and added efficiency should make it easier for more data centers – from large data farms to small businesses running just a few server banks – to liquid-cool their operations.

The end result: a huge savings in both carbon and cost. Iceotope estimates a standard 1000-server center spends $788,400 on cooling costs over three years, while an Iceotope-equipped data center can cut those expenses down to just $52,560. It should also cut down on the physical footprint of data centers as well, as more servers can be packed into less space without the need for large air cooling devices.

Far from an independent assessment, we know, but a glance at the video below betrays no reason why the system shouldn’t, at the very least, keep inefficient ambient air coolers working at low intensity. Not bad for a bag of anti-freeze.