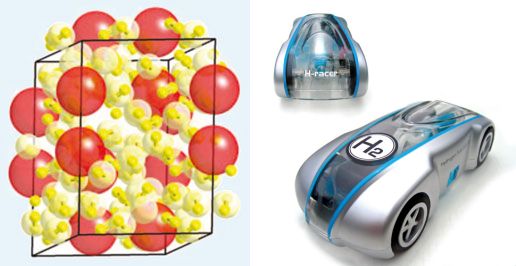 Store me some hydrogen

Science under pressure can produce marvelous results, such as an entirely new way to store hydrogen fuel. Researchers combined the noble gas xenon with molecular hydrogen (H2) to make a never-before-seen solid that opens the doors to an entire new family of materials for hydrogen storage.

The unusually stable solid may clue scientists in on a new method of storing hydrogen. Vehicles from automobiles to aerial drones could run on hydrogen fuel, but only if researchers can figure out how to store enough of the low-density gas within a small enough space to make it cost-effective.

“Xenon is too heavy and expensive to be practical for use in hydrogen-storage applications,” said Maddury Somayazulu, a scientist at the Carnegie Institution’s Geophysical Laboratory in Washington, D.C. “But by understanding how it works in this situation, researchers can come up with lighter substitutes.”

Creating hydrogen from environmentally friendly resources has also proved a bit of a challenge, even though scientists have begun tinkering with lab-modified algae. But until the right technologies come into play for a functioning hydrogen economy, other energy sources must step up.