Bolivia Is the Saudi Arabia Of Our Battery-Powered Future

Bolivia is primarily known for two things: being the poorest country in South America, and having a president with a... 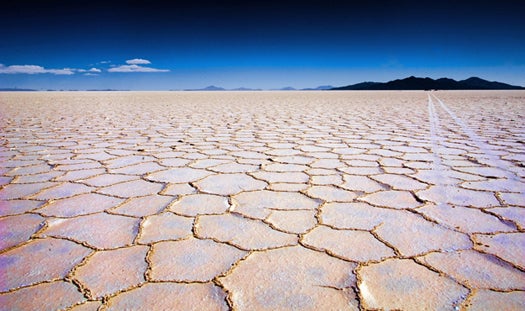 TO GO WITH AFP STORY View of the Uyuni Salt Flats in Bolivia, October 10, 2009. The Uyuni Salt flats has one of the biggest reserves of lithium in the world, estimated in 100,000 metric tons. Companies Bollore (France), Sumitomo (Japan) and Korea Resource (Korea) are interested in taking part in the exploitation of the reserve. AFP PHOTO MARTIN BERNETTI (Photo credit should read MARTIN BERNETTI/AFP/Getty Images). MARTIN BERNETTI
SHARE

Bolivia is primarily known for two things: being the poorest country in South America, and having a president with a terrible haircut. However, it might soon be known for a third thing: lithium. Turns out Bolivia has the world’s largest reserves of the light metal, and according to Foreign Policy, that positions Bolivia as the Saudi Arabia of our carbon-less, battery-powered future.

Lithium already pervades our technology-obsessed society, powering everything from laptops to cell phones to, increasingly, cars. As more and more cars switch from gas to batteries, the demand for lithium will only increase. In fact, consumption of the metal is expected to rise three fold in the next 15 years.

In Bolivia, most of the lithium sits in the Uyuni salt flats. Located in the southwest of the country, the Uyuni is the world’s largest salt flat, and it contains between 50 and 70 percent of the world’s lithium.

These mineral riches and increasing demand have already set off confrontations between Western corporations that want to mine the precious mineral, and Bolivia’s Socialist president, Evo Morales, who prefers nationalized companies. However, that’s just the beginning of the problems. The Foreign Policy article also warns that while lithium replacing oil as the main fuel source will help the environment, there’s no evidence that changing the place and resource will reduce the conflict between those who have the power, and those who want it.