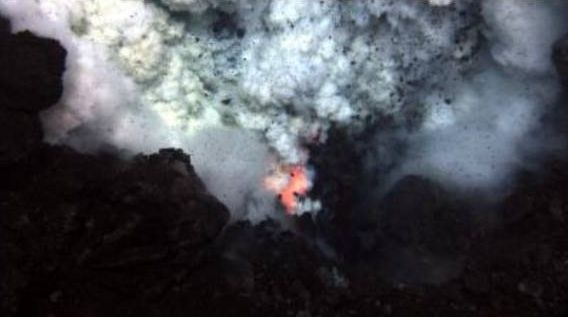 This is how island chains are born. Scientists spotted the deepest erupting volcano almost 4,000 feet below the Pacific Ocean’s surface, and recorded the underwater fury by using the remotely operated submarine Jason.

The West Mata Volcano sits in an ocean area between Fiji, Tonga, and Samoa, and spews out boninite lavas that are among the hottest recorded on Earth in modern times. Water from the volcano has proven as acidic as battery acid or human stomach acid, but that has not stopped shrimp from thriving near the volcanic vents.

This eruption, first spotted in May, has allowed scientists to see molten lava flow across the seafloor for the first time. Vivid video imagery, courtesy of the National Science Foundation and National Oceanic and Atmospheric Administration, shows molten lava bubbles three feet across bursting, as well as the start of lava flows exploding across the deep-ocean floor.

Scientists say that about 80 percent of all eruptions on Earth take place underwater. So all that sound and fury hardly signifies nothing — it’s just the beginning of understanding a deep sea world as alien as anything NASA might discover.