FYI: What Would Happen If Every Element On The Periodic Table Came Into Contact Simultaneously?

There are two ways to go about testing this, neither of which are practical. One requires the energy of dozens... 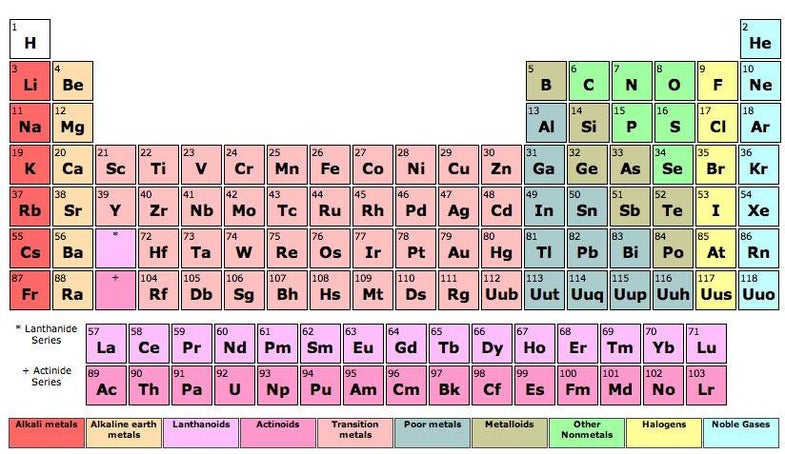 There are two ways to go about testing this, neither of which are practical. One requires the energy of dozens of Large Hadron Colliders. The other could yield a cauldron-full of flaming plutonium. Both, however, would probably create carbon monoxide and a pile of rust and salts rather than a cool Frankenstein element.

If you toss single atoms of each element into a box, they won’t form a super-molecule containing one of everything, explains Mark Tuckerman, a theoretical chemist at New York University. Atoms consist of a nucleus of neutrons and protons with a set number of electrons zooming around them. Molecules form when atoms’ electron orbitals overlap and effectively hold the atoms together. What you get when you mix all your atoms, Tuckerman says, will be influenced by what’s close to what.

Oxygen, for example, is very reactive, and if it is closest to hydrogen, it will make hydroxide. If it is nearest to carbon, it will make carbon monoxide. “That random reactive nature applies to pretty much all elements,” Tuckerman says. “You could run this experiment 100 times and get 100 different combinations.” Certain elements, such as the noble gases, wouldn’t react with anything, so you’d be left with those and a few commonly found two- and three-atom molecules.

Ramming the atoms together at 99.999 percent the speed of light—the top speed of particles in the Large Hadron Collider, at the CERN particlephysics lab near Geneva—might fuse a few nuclei, but it won’t make that cool Frankenstein element. More likely, they would meld into a quark-gluon plasma, the theoretical matter that existed right after the universe formed. “But they would last for a fraction of a second before degrading,” Tuckerman says. “Plus, you’d need 118 LHCs—one to accelerate each element—to get it done.”

The other approach, as explained by John Stanton, the director of the Institute for Theoretical Chemistry at the University of Texas, would be to toss a pulverized chunk of each element or a puff of each gas into a sealed container and see what happens. No one has ever tried this experiment either, but here’s how Stanton thinks things would play out: “The oxygen gas would react with lithium or sodium and ignite, raising the temperature in the container to the point that all hell would break loose. Powdered graphite carbon would ignite, too. There are roughly 25 radioactive elements, and they would make your flaming stew a little dangerous. Flaming plutonium is a very bad thing. Inhaling airborne radioactive material can cause rapid death.”

Once things calmed down, Stanton says, the result would be as boring as the atoms-only scenario. Carbon and oxygen would yield carbon monoxide and carbon dioxide. Nitrogen gas is very stable, and would remain as is. The noble gases wouldn’t react, nor would a few of the metals, like gold and platinum, which are mostly found in their pure forms. The things that do react will form rust and salts. “Thermodynamics wins again,” he says. “Things will always achieve equilibrium, and in this case that’s a mix of common, stable compounds.”