Five South African rhinos have been outfitted with an extra layer of defense against poachers, thanks to a GPS chip... 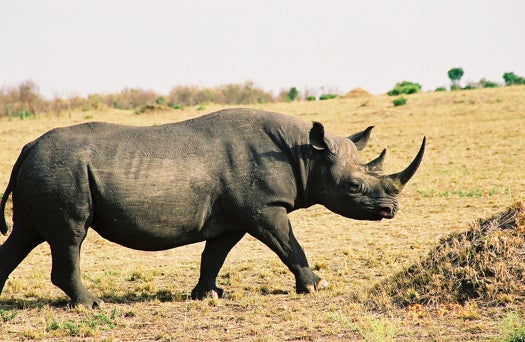 Five South African rhinos have been outfitted with an extra layer of defense against poachers, thanks to a GPS chip implanted in their horns. The chips are inserted into a small hole drilled into the dead portion of the horn. Currently being tested in Mafikeng Game Reserve, the devices are connected to a cell phone system that allows game wardens to monitor the animals constantly and remotely.

Different alarms can also be programmed into the device, sending alerts if the rhino begins running, if it leaves the reserve, or if it sleeps for an abnormally long time. If such an alarm goes off, park employees can track the rhino with GPS and find it quickly. There are plans to tag more animals in other nearby parks in the next few weeks.

Poaching is still a huge threat for South African rhinos, more than 200 of which have been killed this year for their horns, which are used in traditional Chinese medicine. This system could help not only to keep the animals safe, but to potentially track stolen horns and help shut down their trade.