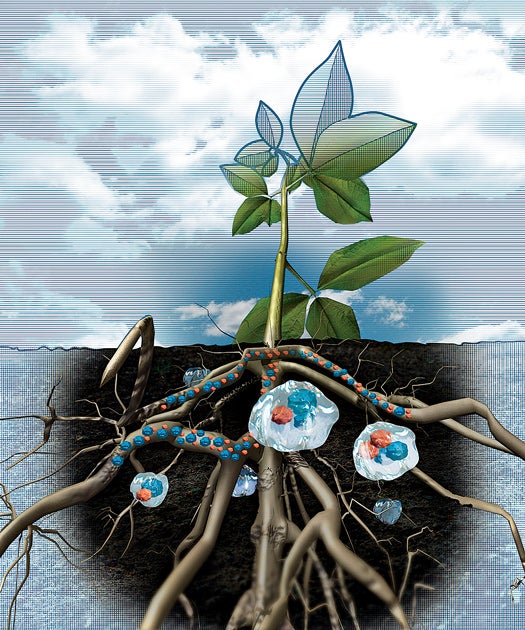 When asked to imagine the Earth in 2040, many scientists describe a grim scenario, a landscape so bare and dry, it’s almost uninhabitable. But that’s not what Willem van Cotthem sees. “It will be a green world,” says van Cotthem, a Belgian scientist turned social entrepreneur. “Tropical fruit can grow wherever it’s warm.” You still need water, but not much. A brief splash of rain every once in a while is enough. And voilà—from sandy soil, lush gardens grow.

The secret is hydrogels, powerfully absorbent polymers that can suck up hundreds of times their weight in water.

Hydrogels have many applications today, from food processing to mopping up oil spills, but they are most familiar as the magic ingredient in disposable diapers. The difference with agricultural hydrogels is that they don’t just trap moisture; they let it go again, very slowly, almost like time-release medication, into the root system of plants. That continuity of moisture is what brittle landscapes like deserts need to become fertile again. Water activates a mineralization process, setting free nutrients in the soil so that life can grow.

But water alone won’t make gardens flourish in sand. So van Cotthem, an honorary professor of botany at Ghent University in Belgium who has helmed several international scientific panels studying desertification, invented a “soil conditioner” called Terracottem. It’s an 8- to 12-inch layer of dirt impregnated with hydrogels, along with organic agents that nourish the natural bacteria in the soil.

Van Cotthem’s early experiments with his soil are now literally bearing fruit on every continent except Antarctica. Where Terracottem sits, barren plots of land are now fertile, and have already changed lives. In 2005, UNICEF invited van Cotthem to oversee the construction of “family gardens” in the Sahawari refugee camps in Algeria. Since 1975, thousands of Africans in the camps have lived in tents and shacks, dependent on the World Food Program to provide them with dry and canned goods—a diet that left them vulnerable to disease. Today more than 2,000 pocket gardens there provide healthy food.

If this technology is so miraculous, you might wonder, why wasn’t it developed earlier? After all, disposable diapers have been around since the 1940s. Until only recently, though, hydrogels were toxic, and skeptics doubted that they could ever be made safe for consumption. There was no bigger skeptic than van Cotthem himself—so much so that the day a research engineer from a German diaper company walked into his lab and told him he’d cracked the nut, van Cotthem said to his face, “I don’t believe you.”

“OK,” the engineer said. And he took out a spoon and ate the hydrogel. Van Cotthem was shocked. Then he said to his visitor, “Please come back in a couple of months so that I know you’re still alive.” Meanwhile, van Cotthem tested the samples, got promising results, and began researching the agricultural uses of hundreds of kinds of hydrogels. When the engineer returned alive, van Cotthem was convinced.

But new soil isn’t enough—people still need something to grow in it. Realizing that half the world routinely throws out seeds that the other half needs, van Cotthem also launched a nonprofit organization called Seeds for Food that asks people to mail in their unwanted seeds. “My office right now is full of pumpkin seeds people sent in after Halloween,” he says.

Scientists are exploring different uses for hydrogels. Enhanced soils, they believe, could be the key to farms in space. The recipe is simple: a few drops of water and glass-like marbles to provide a kind of scaffolding for roots in the soil. “Suddenly,” van Cotthem explains, “you have a rich soil that can support almost anything.” But his sights are set firmly on this star system. “I do see the possibility of achieving wonderful things in space,” he says. “But let us first solve the problems here on Earth, starting with offering everyone the chance to produce their own food. And we are certainly in a position to do so.”