Office workers in Japan are adding some rural relaxation, if you can call it that, to their usual workaday routines.... 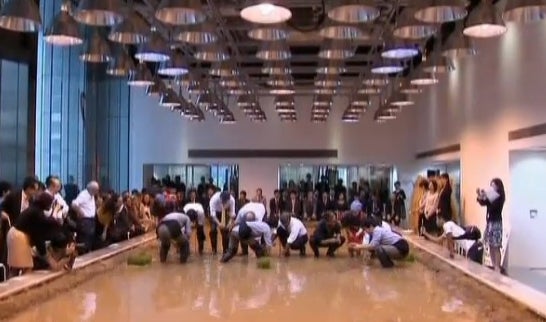 Office workers in Japan are adding some rural relaxation, if you can call it that, to their usual workaday routines. In Tokyo’s bustling business hub of Otemachi, a 1,000-square-foot indoor rice paddy is providing office workers a way to get back to their horticultural roots – and 100 pounds of rice for the building’s cafeteria. That’s actually kind of a big deal for a country that grows only half of the food it requires.

The rice paddy is an experimental effort to get city-dwellers more interested in farming, but also to provide office workers with a rural respite from their crowded urban environs. It also aims to teach skills that have been lost even in Japan’s countryside, where many agricultural tasks have been taken over by machinery.

The implications for future food production are vast as well: Since the paddy is indoors and immune to seasons, it can produce a harvest three times yearly. The 110 pounds this particular paddy produced in its first harvest doesn’t even cover a single Japanese person’s annual rice consumption. But it’s not hard to envision a system where office buildings and apartment towers incorporate larger-scale versions of this indoor farming scheme to produce larger quantities of rice to supplement the harvest from the countryside.

The Otemachi rice paddy is maintained by eight professional farmers, but the harvest was carried out by salaried office drones from a personnel outsourcing firm in the building. Ostensibly, the office workers get to blow off some steam away from their computers, the farmers get a little help harvesting their crops, and everyone gets a little bit of rice in his or her bowl. Not bad considering they didn’t even have to go outside.