Geologists would love to get a closer look at what’s going on underneath active volcanoes, but the very thing that … Continued 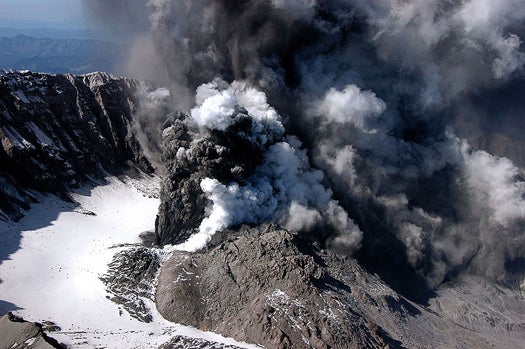 A little more warning would be nice next time.
SHARE

Geologists would love to get a closer look at what’s going on underneath active volcanoes, but the very thing that makes them so interesting — their ability to unleash super-hot, super-violent geological destruction — makes them hard to get too close to. But a new breed of wireless sensor that can withstand temperatures above 1,650 degrees Fahrenheit could change all that, allowing researchers to implement a wireless early-warning sensor network deep within a volcano’s molten-hot bowels.

The technology is based on an electronics material known as silicon carbide that can withstand — and continue to operate under — extremely hot conditions. Dropped into the caldera of an active volcano, silicon carbide sensors could monitor for small changes in gas levels like sulphur dioxide in real time, feeding information wirelessly to a communications center positioned safely away from a potential eruption.

By monitoring such gases, geologists and vulcanologists could better predict when a volcano is about to blow its top, giving disaster response teams ample time to get into place and anyone living in the blast area more time to get out of harm’s way. Considering some half a billion people live within potential striking distance of a volcano, that could be the difference between mere property damage and loss of life.

Volcanoes aren’t the only places silicon carbide could come in handy. Its resistance to high doses of radiation could open it to myriad uses in nuclear technology, and sensors made of the stuff could be placed in places where the threat of attack is great, allowing authorities to ascertain what’s going on — atmospherically speaking — in a subway tunnel or at the site of a nuclear attack even after an explosion or other event has devastated other infrastructure.