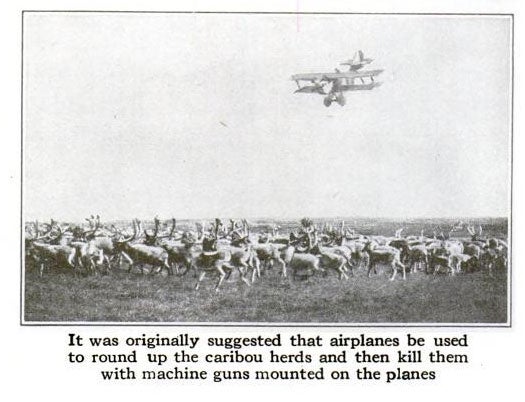 Humans have hunted caribou, or wild reindeer, for ages. Their numbers are numerous. Since reindeer meat is so popular in in circumpolar and Scandinavian countries, why not feed the rest of the world with reindeer? One organization proposed using airplanes to shoot down reindeer with machine guns. The method, while brutal, wouldn't endanger the species as long as the number of reindeer bulls killed per year didn't exceed one million. The Canadian Government even formed an organization called the Caribou Commission to study how airplanes could be used to shoot caribou and distribute its meat to butcher shops. In addition to killing the reindeer, planes could help locate and drive herds to areas near slaughterhouses. Read the full story in "How Caribou Meat Obtained by Airplane Would Increase World Food Supply".
SHARE

On October 16, more than 150 countries will observe World Food Day to raise awareness of poverty and hunger. The Food and Agricultural Organization of the United Nations established the occasion in 1979 and held the first one in 1981 with the theme “Food Comes First.” The October 16 date commemorates the founding of the FAO, which was born after President Franklin D. Roosevelt invited representatives of Allied Nations to Hot Springs, Virginia, to discuss the founding of an international organization dedicated to food and agricultural development.

Although World Food Day is only 29 years old, malnutrition has plagued our planet’s citizens since the dawn of mankind. Feeding billions of starving people poses a daunting challenge, and many argue that industrialization has only drained the world of its natural resources. Convinced that that’s not always the case, we consulted our archives to find ways that science and technology actually worked to fight the hunger crisis.

By the mid-20th century, we knew that clearing farmland to make more room for crops wasn’t the most realistic option for dealing with dealing with hunger. Researchers had to make agriculture less vulnerable to weather patterns and the urban sprawl. Maybe if we sand-blasted clouds to induce rainfall or bred whales as cattle of the sea, the food industry wouldn’t be so affected by bad soil and drought.

Since it was also around for the two World Wars, Popular Science also covered the challenge of providing aid to faraway nations, and to millions of civilians suffering from famine or food shortages. How could we make vitamin-rich food more affordable? How would we transport large amounts of perishables over vast distances while keeping them edible?

We haven’t found the answer to worldwide food shortages yet, but maybe we’re getting there, one experiment at a time. Click through our gallery to read about the sometimes useful, often unusual, ways that science has attempted to alleviate hunger. 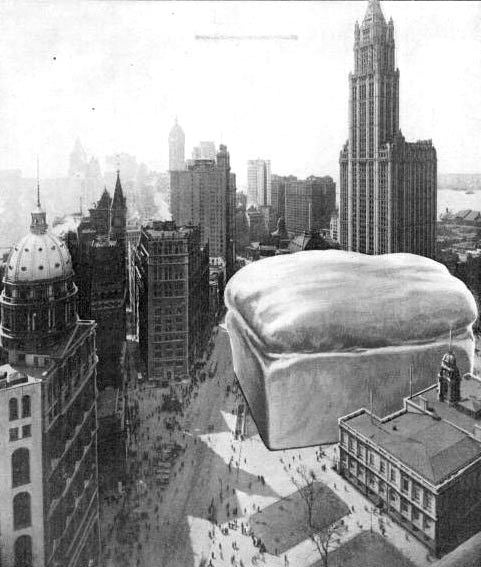 After Germany’s invasion during World War I, Belgium suffered a major food shortage. Emile Francqui and Herbert Hoover, who would soon become head of the U.S. Food Administration, led the Committee for Relief in Belgium, which distributed over two and a half million tons of food to starving people. Once America entered the war, Hoover created programs encouraging Americans to conserve certain foods for soldiers’ rations. The amount of flour people saved amounted to about 600,000 barrels, which is enough bake a ten-story loaf of bread. Despite Republican opposition, Hoover provided food to defeated Germany and to the Bolshevik-controlled areas of Russia, which experienced a famine after the War’s end. We reported that America promised 20 million tons of food for Europe. Can you imagine how many building-sized loaves that amounts to? Read the full story in “You Cannot Waste Your Loaf and Have It Too” 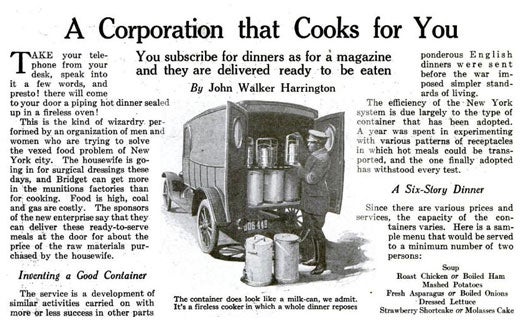 During World War One, we worried that New York would enter a food crisis. While we didn’t fear a famine, we grew concerned at the high expense of food. Families needed money for medical supplies, and as women could earn more working in factories than by staying home, more and more former housewives were using the time spent in the kitchen to find jobs. With men at war and women at work, who would cook? One company proposed a solution: dinners for delivery. Containers, which resembled milk cans at the time, would organize hot courses in six layers, while a three-layered container would hold cold components, like salad. Priced at fifty cents, these pails of food weren’t much more expensive than the raw ingredients for a homecooked meal. Read the full story in “A Corporation That Cooks For You”

Humans have hunted caribou, or wild reindeer, for ages. Their numbers are numerous. Since reindeer meat is so popular in in circumpolar and Scandinavian countries, why not feed the rest of the world with reindeer? One organization proposed using airplanes to shoot down reindeer with machine guns. The method, while brutal, wouldn’t endanger the species as long as the number of reindeer bulls killed per year didn’t exceed one million. The Canadian Government even formed an organization called the Caribou Commission to study how airplanes could be used to shoot caribou and distribute its meat to butcher shops. In addition to killing the reindeer, planes could help locate and drive herds to areas near slaughterhouses. Read the full story in “How Caribou Meat Obtained by Airplane Would Increase World Food Supply” 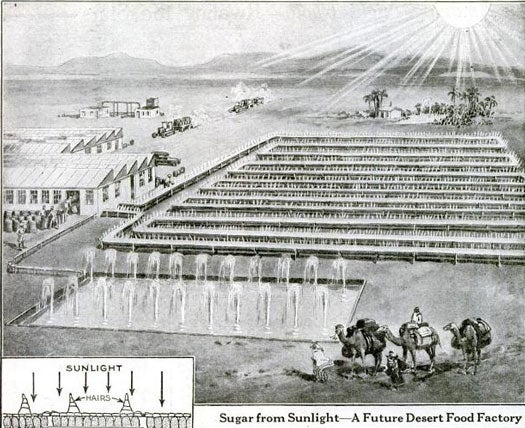 While studying photosynthesis, scientists in the 1920s grew confident that future farmers and factory workers would understand it so well, that they would develop the technology needed to grow plants and produce sugar in the desert. Pictured left is a hypothetical desert factory for the artificial manufacture of sugar. Water charged with carbon dioxide would flow through glass pipes encased in mirror-lined troughs. We imagined that the intensified sunlight would improve on photosynthesis by making it occur faster. Read the full story in “Noted Scientists Grapple with Food and Fuel Famine” Many famines can be blamed on drought. Wouldn’t it be something if people could induce rainfall instead of praying for it? Scientists Wilder D. Bancroft and L. Francis Warren studied cloud dispersal and rainmaking in an effort to manipulate the weather. While modern-day cloud seeding uses silver iodide, dry ice, or salt to induce precipitation, Bancroft and Warren experimented with electrically charged sands. After successfully dispelling small clouds with airborne sandblasters, the scientists fought to manufacture rainfall. “Think what man-control of the weather will mean to the farmer!” we wrote. “The rain clouds that ordinarily would pass by, carrying their moisture with them, are attacked. Gasping acres receive it and millions of dollars are added to the value of the crops.” Despite all the excitement, their methods were unsuccessful in the long run, and weather manipulation never became a popular means of eradicating drought or famine. Read the full story in “Is Rainmaking Riddle Solved?” 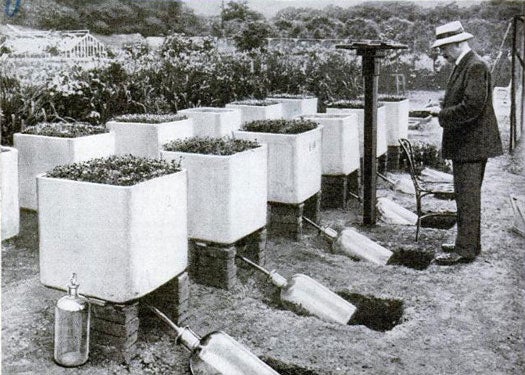 Will gardens like these one day produce our primary sources of food? No, it’s just an outdoor laboratory dedicated to studying how insulation and humidity affect vegetable growth. French scientist Daniel Berthelot, son of Marcellin Berthelot, suggested that in the future, farming could give way to vegetable-making factories. Instead of relying on healthy soil and vast farmland for crops, why don’t people use chemistry to just create plants? He maintained that starches and sugars could be created artificially by exposing various gases in ultra-violet light. But what would a factory based on his methodology actually look like? Read the full story in “Factory-Made ‘Vegetables’: Our Future Food?” 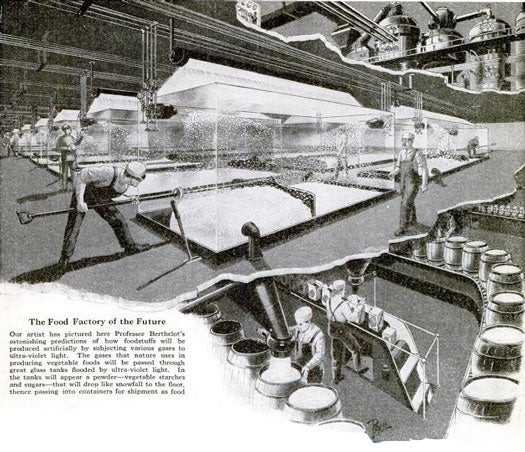 Behold, the food factory of the future. Workers would pump various gases into glass containers filled with ultraviolet light. Powdered vegetable starches and sugar would materialize inside the tanks before falling through tubes and into shipment containers. While the process may sound a little like alchemy, Berthelot provided a scientific explanation of its possibility. It essentially boils down to photosynthesis, as it was understood at the time: Ultraviolet rays would decompose water vapor and carbonic acid gas into hydrogen and oxygen, and oxygen and oxide of carbon, respectively. Meanwhile, the combination of oxygen, hydrogen and carbon under the influence of ultraviolet light results in formic aldehyde, a simple sugar. The combination of carbon, oxygen, hydrogen, and nitrogen under the the influence of light would result in the starch called formiamide. From the basic starches and sugars come more complex foodstuffs. Read the full story in “Factory-Made ‘Vegetables’: Our Future Food?” 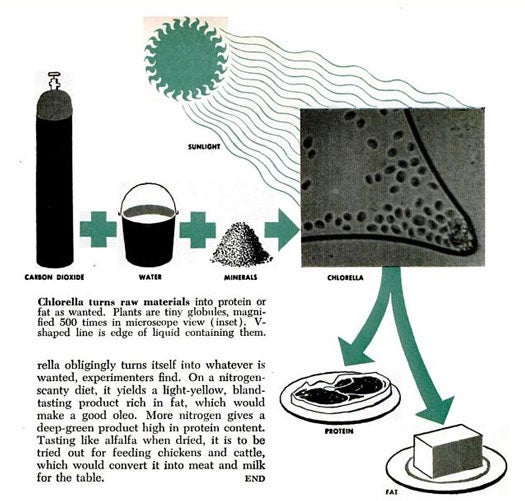 Following the postwar food shortage in Europe and a likely population boom, researchers championed Chlorella, a type of algae, as a potential new primary food source and the answer to world hunger. Chlorella could multiply quickly and convert 20 percent of solar energy into a plant. When dried, the plant was 50 percent protein. Moreover, the algae could be used as a food source for animals destined for people’s dinner plates. The Stanford Research Institute opened a “pre-pilot” plant for raising Chlorella. Some experimenters grew the algae in tubes. Others tried cultivating it in giant tanks. Despite the hoopla, researchers could not find an efficient means of growing the algae and converting it into food. The process was simply too expensive, and the food too hard to produce without subjecting Chlorella in complicated artificial conditions. The plant has since faded into obscurity. Read the full story in “Harnessed Sunlight Grows Food by Tankful” 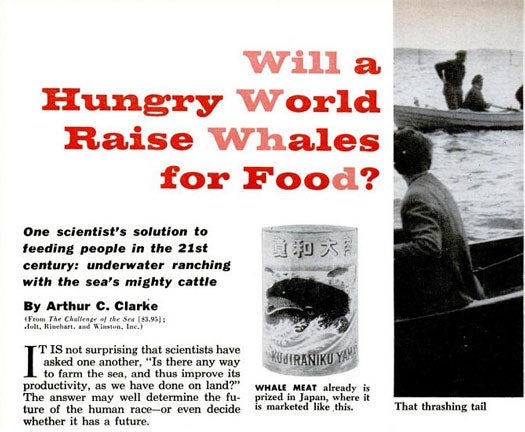 Renowned science fiction author Arthur C. Clarke contributed this article on protecting, breeding, and herding whales as if they were cattle. At the time, 50,000 whales were killed annually and could earn $30,000 a piece in food or oil products. Most of these whales were uselessly slaughtered and wasted. Clarke suggested that to make whaling more efficient, people tame whales the same way farmers domesticated cattle. Whale breeders could lead the animals toward artificially fertilized feeding areas, protect them from their natural enemies, or even train killer whales to act as “marine sheep dogs” for groups of whales. It’d be challenging, but scientists could even design a milking station. Whale milk, which is unsuitable for human consumption, could be converted into fats or other foods. The International Whaling Commission went on to ban commercial whaling in 1982. Read the full story in “Will a Hungry World Raise Whales for Food?” 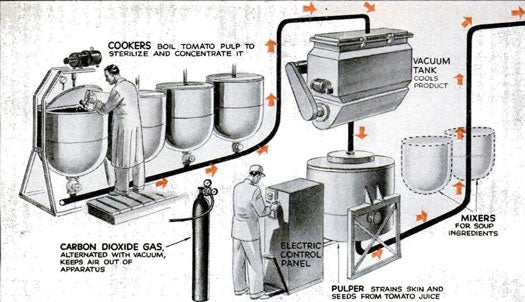 As the Second World War raged on, we could only imagine the relief effort needed for famine-stricken Europe to recover. Transporting enough food over long distances was no easy feat, but scientists helped alleviate the challenge after developing dehydrated foods. Unlike previous types of dried food, which could return to their original form, the 1942 variety was so dry it could only be used in as liquid or in gelatin. Clam “pennies” (like bullion cubes) could turn into soups, while citrus fruits into powdered juice mixes. Of course, dried foods intended for aid would retain the vitamins from when they were fresh. “Now It’s Quick-Dried Foods” 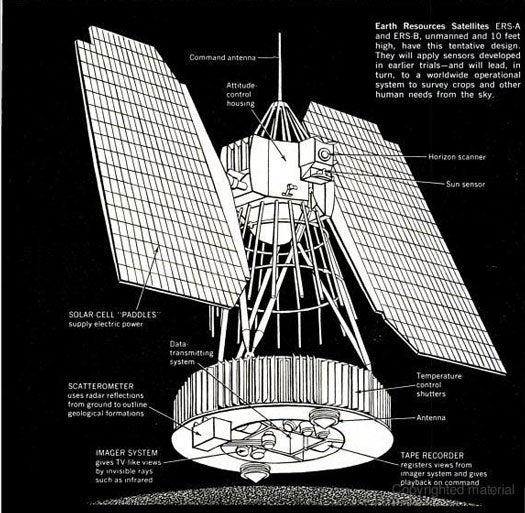 NASA director and esteemed engineer Wernher Von Braun expressed big dreams for the Earth Resources Technology Satellite 1, (later renamed to Landsat 1), which was designed to survey the earth’s resources. The satellites could help enliven impoverished nations by locating previously unknown deposits of minerals or oil. It could monitor fields for signs of decay, hail damage, or lack of fertilization. Sophisticated cameras could even relay back information on soil quality. The program went on to provide a unique resource for researching how natural and human processes have affected the planet. “Eyes in the Sky Will Help Feed the World”
Agriculture
archive gallery
archives
farming
food
future then